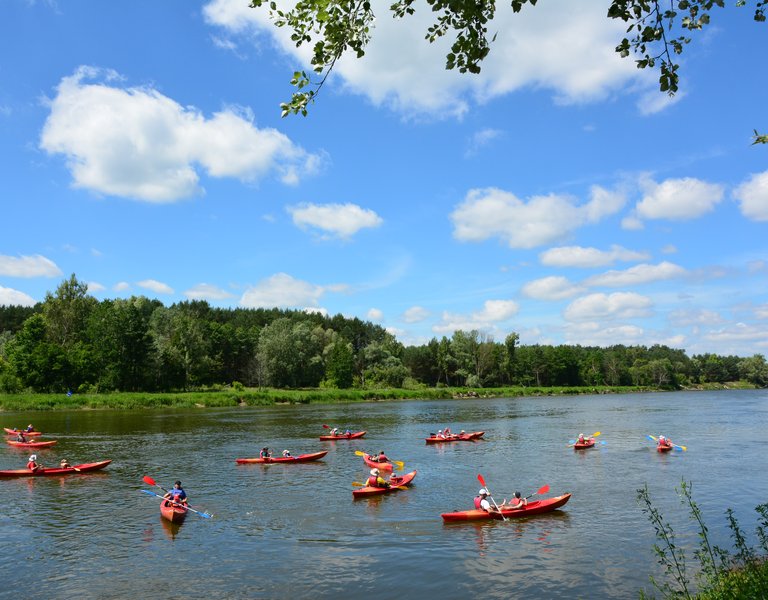 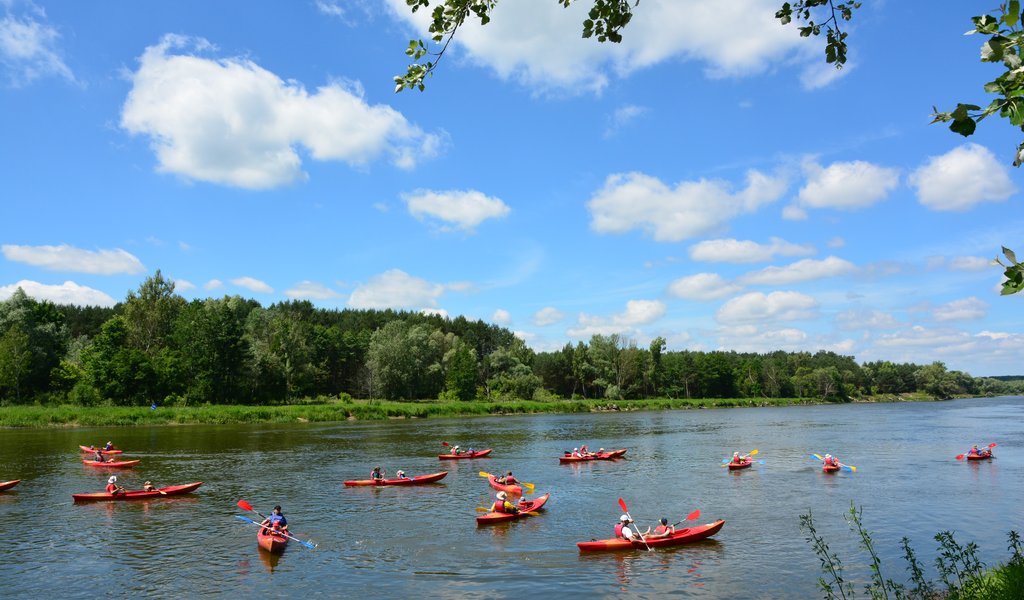 Kayaking down the Bug River

The Bug River, a haven for wildlife, flows through the cultural borderlands and along the eastern border of the European Union.

A long-forgotten entry in “The Geographical Dictionary of the Kingdom of Poland and Other Slavonic Countries” from 1880-1902 reads:  “The Bug, a river which comes second among Polish rivers after the Vistula River because of its length, a great quantity of waters and the substantial benefits that it brings”. In addition to the bare facts, the entry includes a picturesque description of the primeval valley of the Bug River: “swampland”, “wet midforest  meadows”, “numerous holms and quagmires overgrown with reeds and bulrush”, where “no man trod before”. Kayaking down the Bug River in 2015, I found that the more than century-old description of the river was still surprisingly accurate. 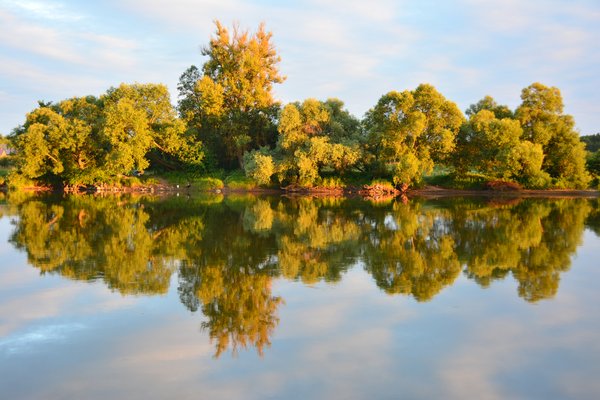 The Bug River is one of the last big European rivers (772 km long, including 587 km in Poland) with an unregulated, natural channel. It begins in the Podolian Upland in Ukraine and drains into Lake Zegrzyńskie near Warsaw. The Gołębie - Niemirów section (363 km long) flows along the Polish-Ukrainian and Polish-Belarussian border and, thus, the eastern border of the European Union. Although it is extremely charming, kayaking down this river can be troublesome given the obligation to notify the Border Guard of the kayaking trip and planned camping arrangements, the ban on mooring along the bank in the neighbouring state and the restriction of only being able to kayak from sunrise to sunset.

The most picturesque section which lies entirely on the Polish side runs from Niemirów to Drohiczyn through the Landscape Park of the Bug River Gorge in Podlasie, which protects the meandering river with its islands, escarpments, sandbars, riverside meadows and willow as well as poplar riparian forests.

We started the approximately 34 kilometres long kayaking trip in Mielnik (15 km from Niemirów) and we finished it the next day in Drohiczyn.

When we arrived in Mielnik, we stopped on the roadside, as we were fascinated by the blue-red fields – blue due to the cornflowers and tinted red by poppies. In the 15th and 16th centuries, the area was a booming crafts and trade centre (its chalk mines are still in operation today), the venue of Polish-Lithuanian regional assembles and rallies, but now it is just a nice village, enveloped in greenery. The remains of a stronghold (from the 11th and 12th centuries), a castle (from the 14th century) and a brick church (from the 15th century) shaded by old trees are visible on the high bank of the Bug River. The Bug River Valley looked fabulous from here. We went down the hill and crossing lush, fragrant meadows along the Bug River we walked to the Topolina clearing – our starting point. We launched the kayaks on the water and moved out! 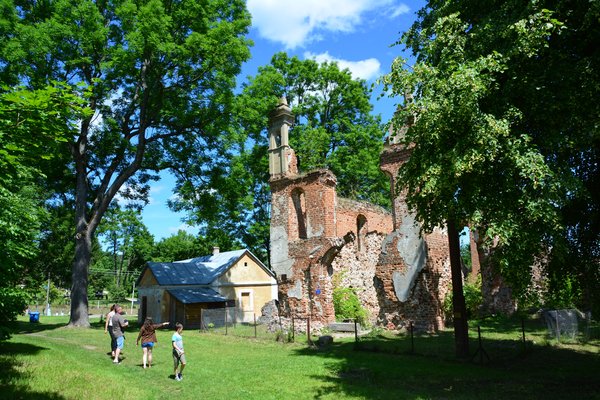 In the Bug River Valley, there is a large number of characteristic oxbows, so called “bużyska”, with their banks overgrown with bulrush and horsetail. At some places the river splinters and forks, flowing around islands with high sandy banks.

A hawk circled over one of them, above a comb of coppice willows. “I have seen rode deer swimming to the islands,” said Włodzimierz Brzozowski, who accompanied me in my kayak and knew this section of the Bug River extremely well. “Once I even saw a sow with piglets in the water. It was quite a scene! That’s why it is best to kayak out of season, in the winter or autumn. When there are no people and animals come out of hiding”.

The banks of the Bug River were often very difficult to access – they were high, overgrown with shrubs and dangerous due to fallen trees. For this reason we were keen to get out on the land wherever we could. We waded on the muddy bottom, listened to the birds singing and admired colourful butterflies and dragonflies with their navy blue wings and blue abdomens.

Although it is regarded as one of the easiest kayaking routes, the Bug River is sometimes unpredictable and dangerous. “Once I was surprised by a storm. Gusts of wind built up huge waves,“ said Jacek Pieńkowski, a kayaker and water rescuer who had rowed on the Bug River for 50 years. “It is awesome to see the thunder strike the water with clouds of steam rising into the air. And it makes such a loud noise that it breaks the eardrums.”

We spent the night at the “Under the Pine” recreation centre at Wólka Nadbużna. This year’s low water level exposed a high ridge and we found it difficult to carry the kayaks onto it. In an extensive clearing it was possible to put up a tent or hire one of the cottages hidden in a pine forest (near my cottage, I found a charming oxbow overgrown with rushes and a wooden pier). 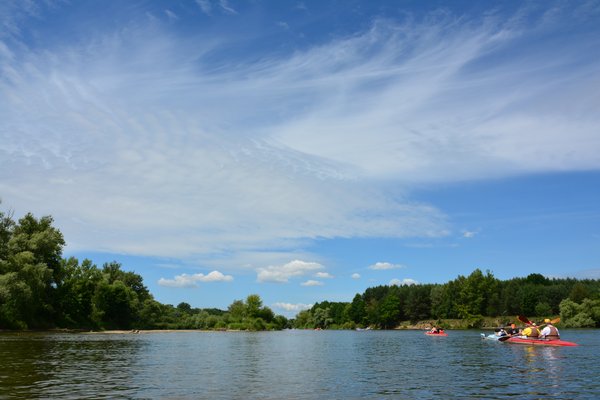 At sunset, an unforgettable spectacle unfolded over the escarpment: the lush green, dense vegetation was enveloped in the golden light and reflected in the quiet waters of the river like in a mirror.

We had breakfast in the open air with storks flying over our heads. Later on, sitting in our kayak, we spotted traces of beavers’ activity: chewed trunks and fallen trees sticking out of the water and bringing to mind various abstract sculptures. “On the Bug River, there is an enormous number of beavers,” said Jacek Pieńkowski. “It is easiest to see a beaver when you quietly launch the kayak on the water before sunset. It is then that beavers come out to eat.”

Before we reached Drohiczyn we slowed down at an a ridge, full of holes like a Swiss cheese, with shrieking birds darting overhead. We also saw sand martins and kingfishers, nesting in their burrows dug out in the sandy slope.

In the early afternoon we reached Drohiczyn. The former capital of Podlasie Province (1566-1795) had a small-town charm about it and large church monuments, including a18th-century Orthodox church and Baroque monastery complexes belonging to Jesuits, Franciscan monks and Benedictine nuns. From the Castle Hill, where centuries before the King’s Castle had stood, we looked at the Bug River Valley enveloped in lush greenery.

“Small rivers are also beautiful, but to me they do not have enough space, breathing space,” said Jacek Pieńkowski. “The Bug is really a great river!”

The kayaking trip was organised by the County Administration Office in Siemiatycze; it takes place every year at the turn of June and July. 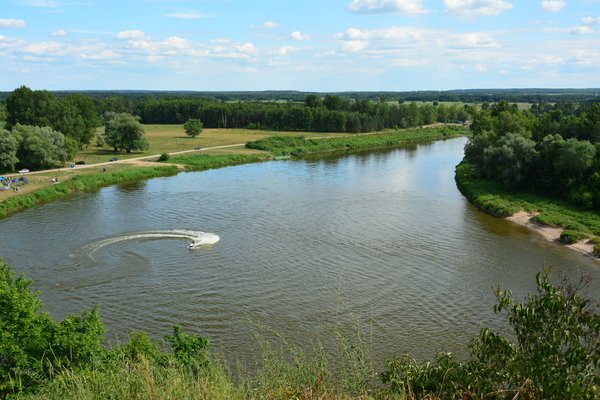 The Bug River – A Haven for Wildlife

The wild Bug River Valley is a haven for innumerable species of birds and other animals. They include hoopoes, lapwings, grebes, swans, eagle owls (some of the largest owls in the world), woodpeckers, sparrow hawks and buzzards. The most numerous mammal species include beavers and river otters, as well as badgers, deer and roe deer, elks, rarely encountered wolves and mud turtles threatened with extinction. Along the Bug River, a large number of protected landscape areas, landscape parks and nature reserves have been established. One of them is the Bug Refuge (Ostoja Nadbużańska), a 260 kilometres long section of the river stretching from the mouth of the Krzna River to Lake Zegrzyńskie, which is part of the European network Natura 2000.