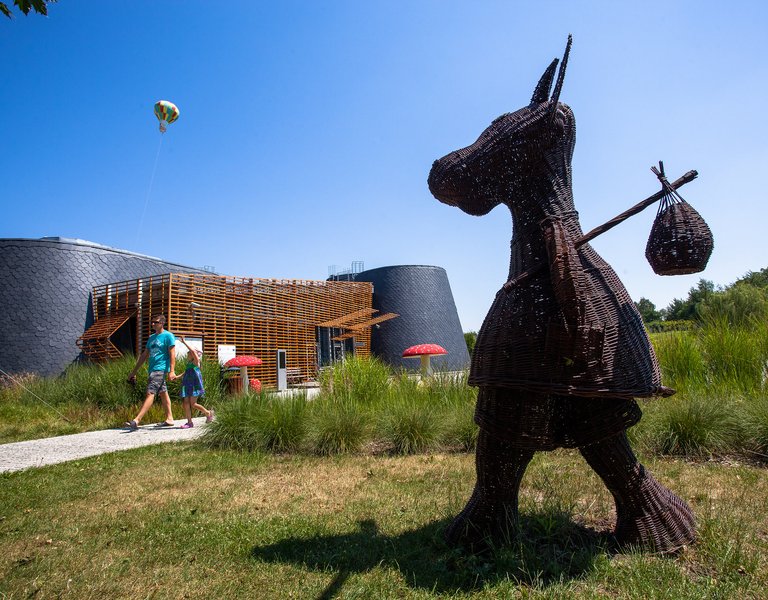 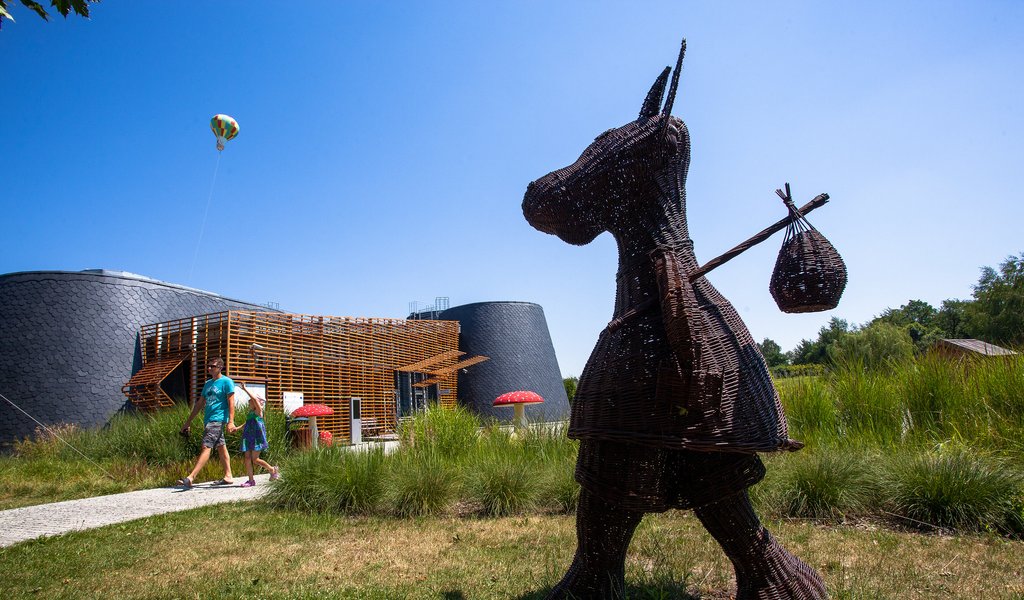 Pacanow became famous for the adventures of Matołek the Billy-Goat, a likeable hero brought to life by Kornel Makuszyński and Marian Walentynowicz. The town that he headed for has been named the Capital of European Cartoons since 2003. A few years later, a Matołek the Billy-Goat European Fairy Tale Centre was established, which each year draws tens of thousands of children.

The Centre’s uniquely shaped building will catch your eye right away as it resembles children’s sand pies. The modern facility houses a fantastic exhibition, library, cinema and workshop rooms. Children enter the Fairytale Land on a magic train to be later shown around the Mouse Hole, the Dragon’s Den, the Magic Garden and other attractions by the Little Red Riding Hood, Snow White or Tinker Bell.

The building is surrounded by the Enchanted Gardens. An emerald grass garden stretches outside the entrance, giving way to a garden of yellow, purple and white plants. A Garden of Taste beckons with real treats: currants, raspberries and strawberries, while a Garden of Touch with plants whose leaves have unique textures. It’s worthwhile to take a closer look — somewhere in between them you could spot real pears growing on a willow tree!

Matołek the Billy-Goat — one of the first protagonists of children’s stories in Poland, created by Kornel Makuszyński (text) and Marian Walentynowicz (illustrations) in 1932. Over the subsequent series, he tries to make it to the world’s only place where he believes he could get goat shoes. On his quest, a likeable, a bit clumsy, gullible and good-natured Matołek has many incredible adventures! 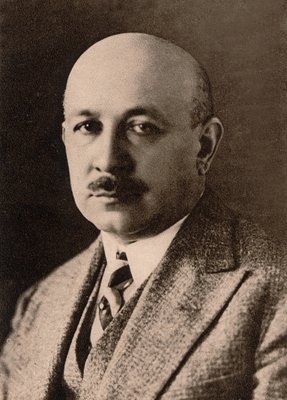 Kornel Makuszyński (1884-1953) — Polish prose writer, poet and columnist, a star of Polish literature of the pre-WWII period. He started writing as a fourteen-year-old and was first published two years later. He studied Polish and Romance studies at the John Casimir University in Lwow, then at the Sorbonne in Paris. After the First World War, he settled in Warsaw, where his literary career flourished. His greatest bestsellers, also popular with young people decades later, included: Przyjaciel wesołego diabła (A Merry Devil’s Friend), Panna z mokrą głową (The Girl with the Wet Head), Awantura o Basię (Argument about Basia), Szatan z siódmej klasy (Satan from the Seventh Grade), and Szaleństwa Panny Ewy (The Follies of Miss Eva).

During the German air raid of Warsaw in 1939, a bomb hit the building with Makuszyński’s apartment. His manuscripts and art collection burned down. He lived through the German occupation in Warsaw, where he wrote for the insurgent press. In 1944, he moved to Zakopane, and a year later he was banned from publishing and suffered harassment. The new authorities feared his “negative influence on the post-war youth.” One of the most popular and widely-read writers of the interwar period lived his final years in poverty and rejection. An award named after him has been given since 1994 in Poland. Kornel Makuszyński is also the patron of many Polish schools.