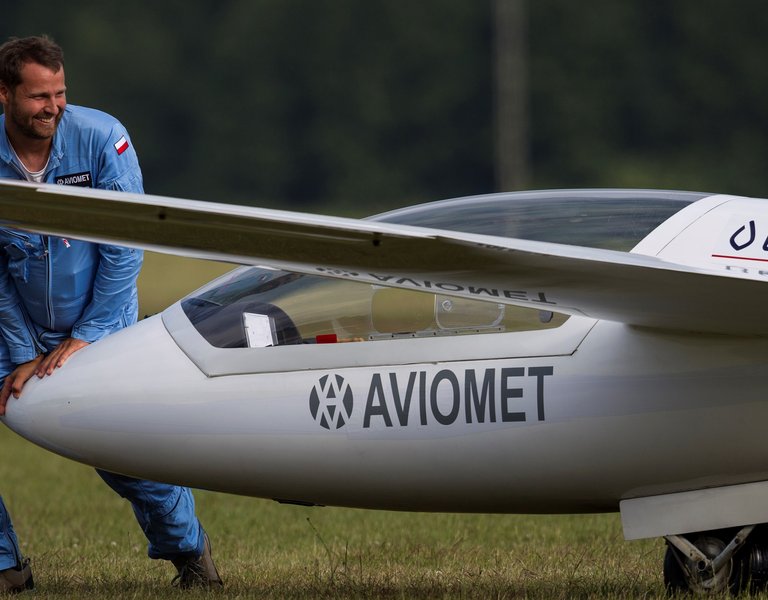 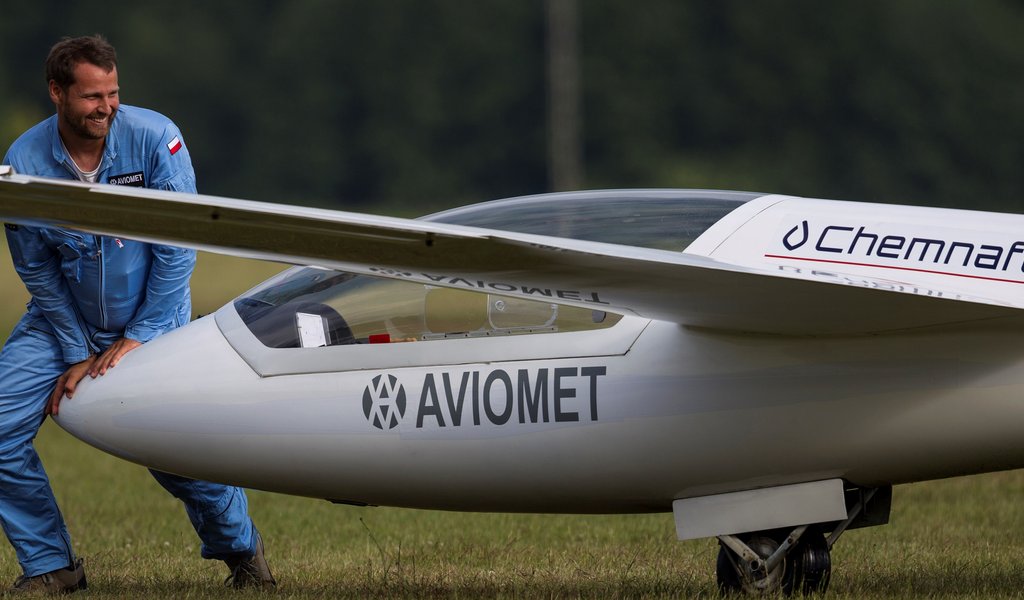 Poland is one of the world’s leaders in aerobatic gliding, despite the fact that Poland’s gliders are better known internationally than in Poland itself. Events showcasing gliding disciplines help popularise the sport and they allow us to share our passion for the sport with a wider audience, Maciej Pospieszyński, a two-time aerobatic gliding world champion tells Polska.pl. Pospieszyński is one of the stars of the Air Show in Radom, taking place between 22 and 23 August.

At the Air Show in Radom you will be performing acrobatics in the air above an audience of around 100,000 people. How is this event different from those held at world championships?

These types of events are an opportunity to share our enthusiasm and our passion for flying. It is a nice feeling to know that among the hundred thousand people gathered below, several young people looking up at us will later decide to become pilots. The show is a chance for Polish competitors to share their talents and achievements with their compatriots. Poland is a world leader in aerobatic gliding, gliding competitions, world rally flying championships and ultralight triking, however not many people know this because they are not even aware that these sporting disciplines exist. Events such as the Air Show help popularise disciplines that do not receive much media attention although they are amazing to watch. For me the Air Show is also a good way to train for this year’s World Air Games in Dubai, where I will be competing in two disciplines.

Last year you became world champion in the Unlimited category for the second time. Since then you have become a crowd favourite at the Air Show. Many of the hundred thousand visitors are coming to the event mainly to see you. Despite this, your road to success was a long one – and not exactly typical.

It took me a dozen or so years to get where I am. Until I was 32, I did not have a full-time job because I was convinced that at some point I would be able to earn a proper living from being an aerobatic glider. When I told this to more accomplished Polish competitors, they just looked at me as if I was crazy. None of them decided to go professional and all of them had normal jobs, whereas I did everything I could to avoid signing a job contract, even as a commercial pilot. I made ends meet by working part-time at the airport. During the season I worked as a gliding instructor and working a winch, helping gliders take off. I also did a bit of menial labour. I did all of this so that I could be as close as possible to flying, so that I could dedicate every spare moment and money I had towards training. However, because I also had to earn a living, I was only able to train half of the time, which meant that I was never as well prepared as the world’s best. In 2012 I decided to train full-time for the upcoming championships. Friends of mine lent me 15,000 zl and I dedicated myself entirely to training. It paid off. I became world champion.

Was it easy to find a sponsor back then?

Not at all. Finding a sponsor in this sport is difficult even for a world champion because the conventional route in this case does not lead you anywhere. I was lucky. I was at an Aviator’s Ball organised by the magazine „Skrzydlata Polska”, when I was approached by the CEO of Aviomet, a producer of meteorological equipment for airports. He came to congratulate me, however he grabbed his head in disbelief when he found out that I was 32 years old but had never had a job contract. We agreed to meet. In 2013, Aviomet became my sponsor and a year later I became world champion for the second time.

In front of an audience in the Polish city of Torun.

It was a dream come true for me. Not only as a sportsman but also as a Varsovian, because the championships finished on 1 August, the anniversary of the Warsaw Uprising. I thought that it would be highly symbolic if a Pole would take first place on the anniversary of “W-Hour” (ed. note: “W” from the Polish “wybuch”, “outbreak”. The Warsaw Uprising, which started on 1 August 1944, was an insurrection orchestrated by Varsovians and the Underground’s Home Army against German forces occupying the city and country. The Uprising broke out exactly at 17.00, now known as “W-Hour”). The victory was made even sweeter by the fact that it was a very tough competition. This past year has been a successful one for me. I also took up airplane aerobatics and became Polish champion. 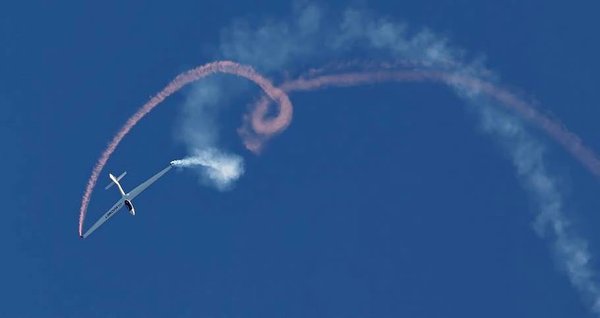 Poland’s biggest air show has been held since 1991, first at Poznan Ławica Airport, then at Dęblin and, since 2000, at Sadków Airport in Radom. The Air Show also displays Polish and foreign military equipment. Every year the event is accompanied by interesting side events, often culture related.

This is another discipline in which you hope to become world champion.

It won’t be easy, but it is my dream – and I have a habit of realising my dreams. Thanks to my partner, Agnieszka, I have been able to sign another sponsor – CHEMNAFT, a producer of motor oil.  The sponsor covered the costs of a plane. Financially, this a completely different league compared to aerobatic gliding as a plane of a similar quality to a good rally car costs 400,000 euros. Added to this are maintenance costs, hangar rental and training costs – around 200,000 zl annually. Today these costs are covered by my sponsors but three years ago, already as world champion, I was unsure if I was going to be able to pay my friends back those 15,000 zl.  This proves to me the importance of thinking big and investing in your dreams. I am now on track to take part in the airplane aerobatics world championships, with the aim of being one of the top contenders within a few years.

Aerobatic gliding experts write that you are one of the world’s most talented competitors. Do you think you will be able to transfer these skills to airplane aerobatics?

That is my hope, although it involves a different type of flying, with more delicate manoeuvres and a higher G-force. Seen from the ground, gliders look very light, however they require a lot of power in order to deal with higher pressure measuring 8 G. This means that I am being pushed into my seat with a force eight times stronger than gravity. My hand, with which I am carrying out the manoeuvres, is eight times heavier. It is difficult to breathe, your blood flow goes down to the legs and every movement you make is incredibly difficult. Sometimes the opposite effect happens: you get thrown out of your seat, blood flows to the head and you feel like it is about to explode. Even a training flight, lasting three minutes, let alone a championship event, can cause great discomfort. Meanwhile, in airplane aerobatics this pressure is ever greater. It is comparable to the pressure experienced by military pilots flying fighter jets. Here you are faced with a pressure measuring 10 G. Therefore a transition from gliders to planes will be a challenge for me, requiring a greater effort and more time spent regenerating and resting. As a result, I no longer take part in motor sports as any injury, for example a dislocated shoulder, could mean the end of the season for me.

As a professional, how much time do you spend training?

During the season, I normally spend three to four days at the airport in Bielsko-Biała, the rest of the week I spend regenerating and with my family. When the season is over I keep in shape by swimming, running and cycling. My schedule is now set to be even busier now that I am taking on airplane aerobatics, but I am convinced the extra work will pay off, leading to another title. Poland used to be a strong contender in airplane aerobatics back in the 1990s. I hope to help Poland reclaim its position at the top. 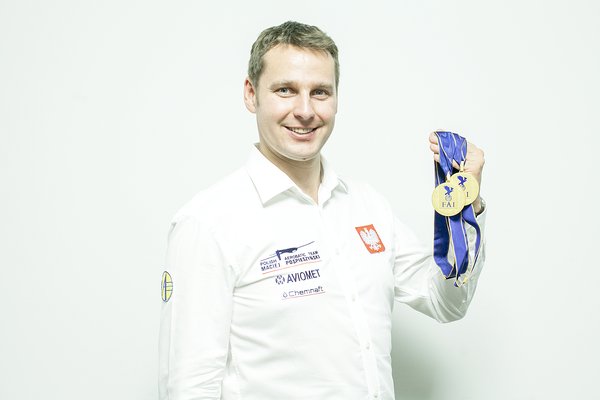 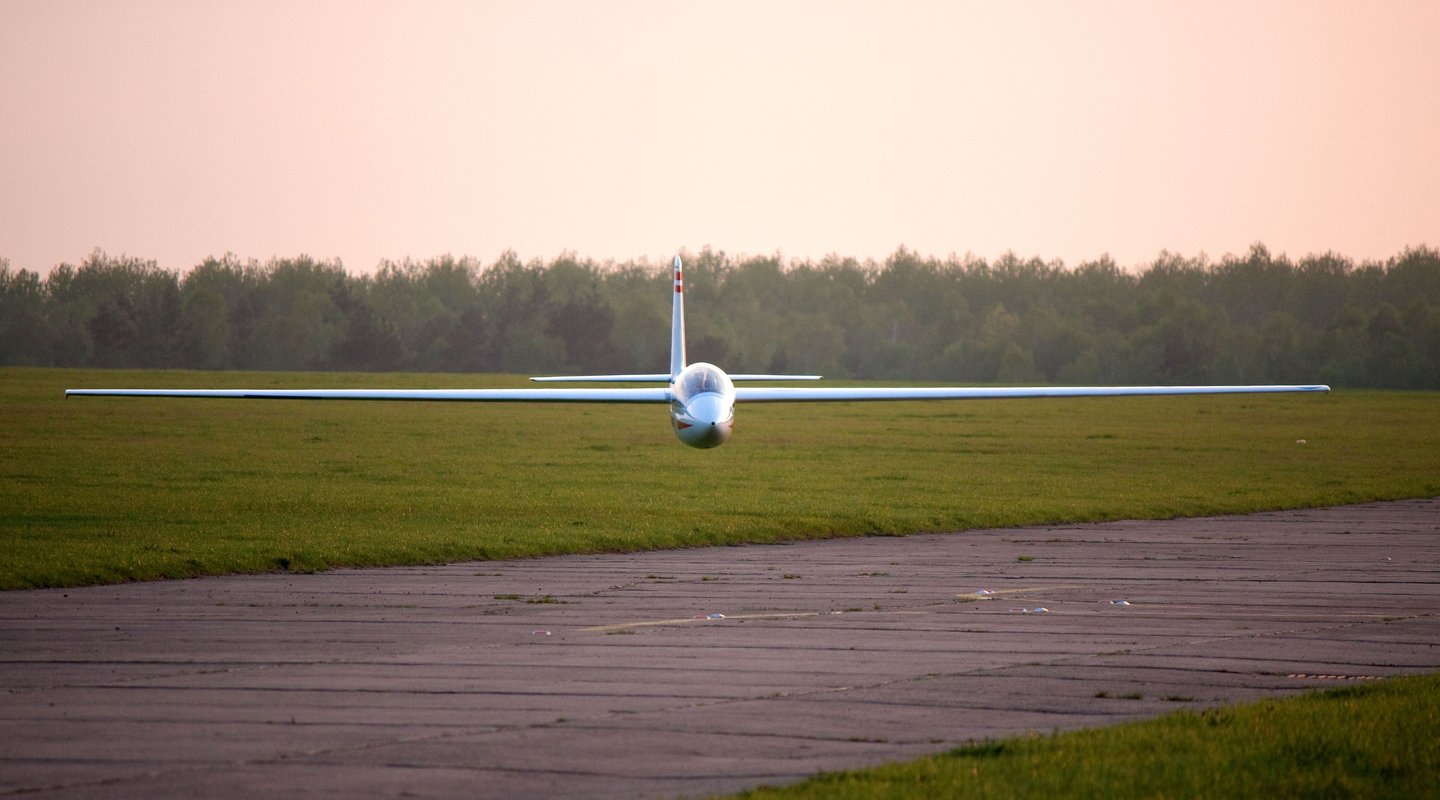 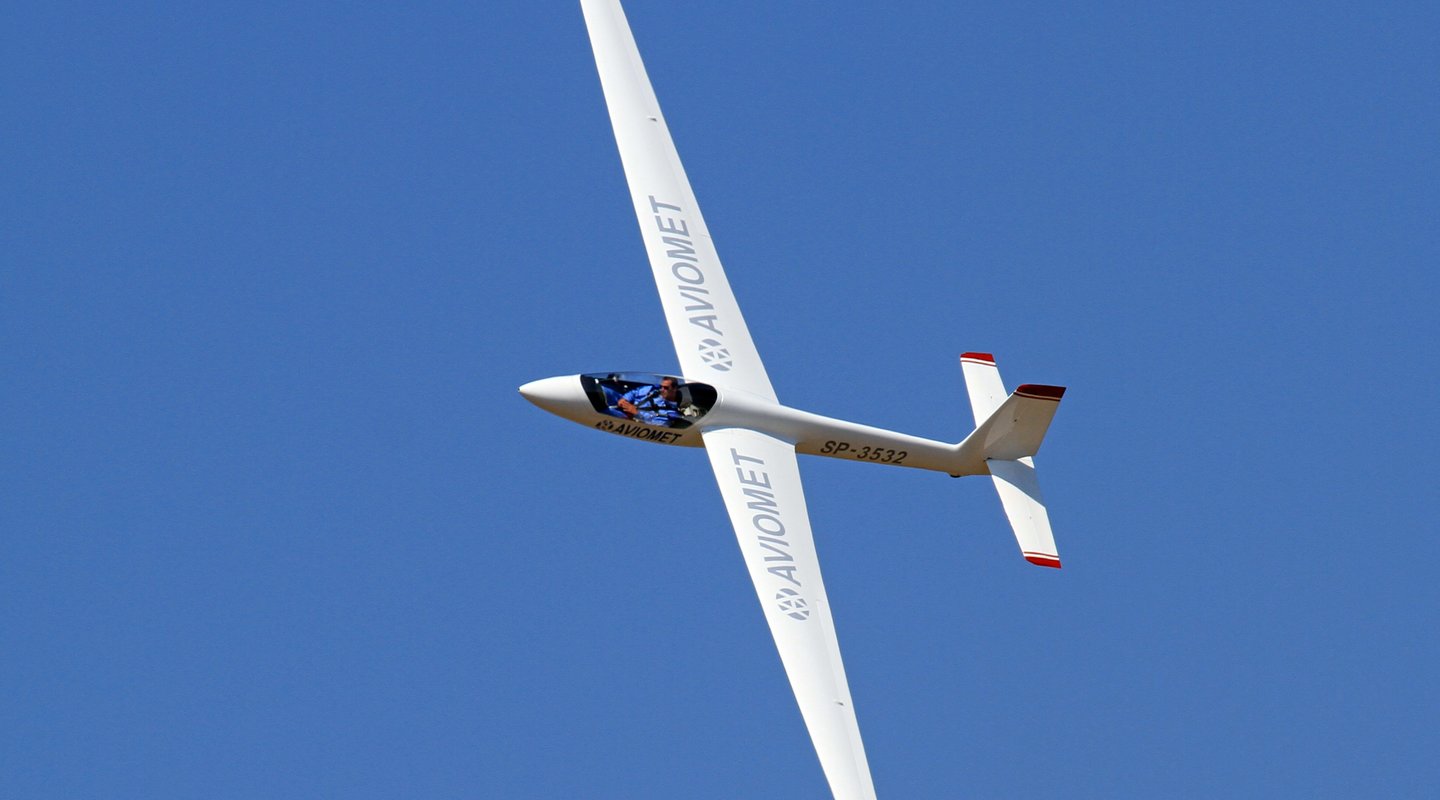 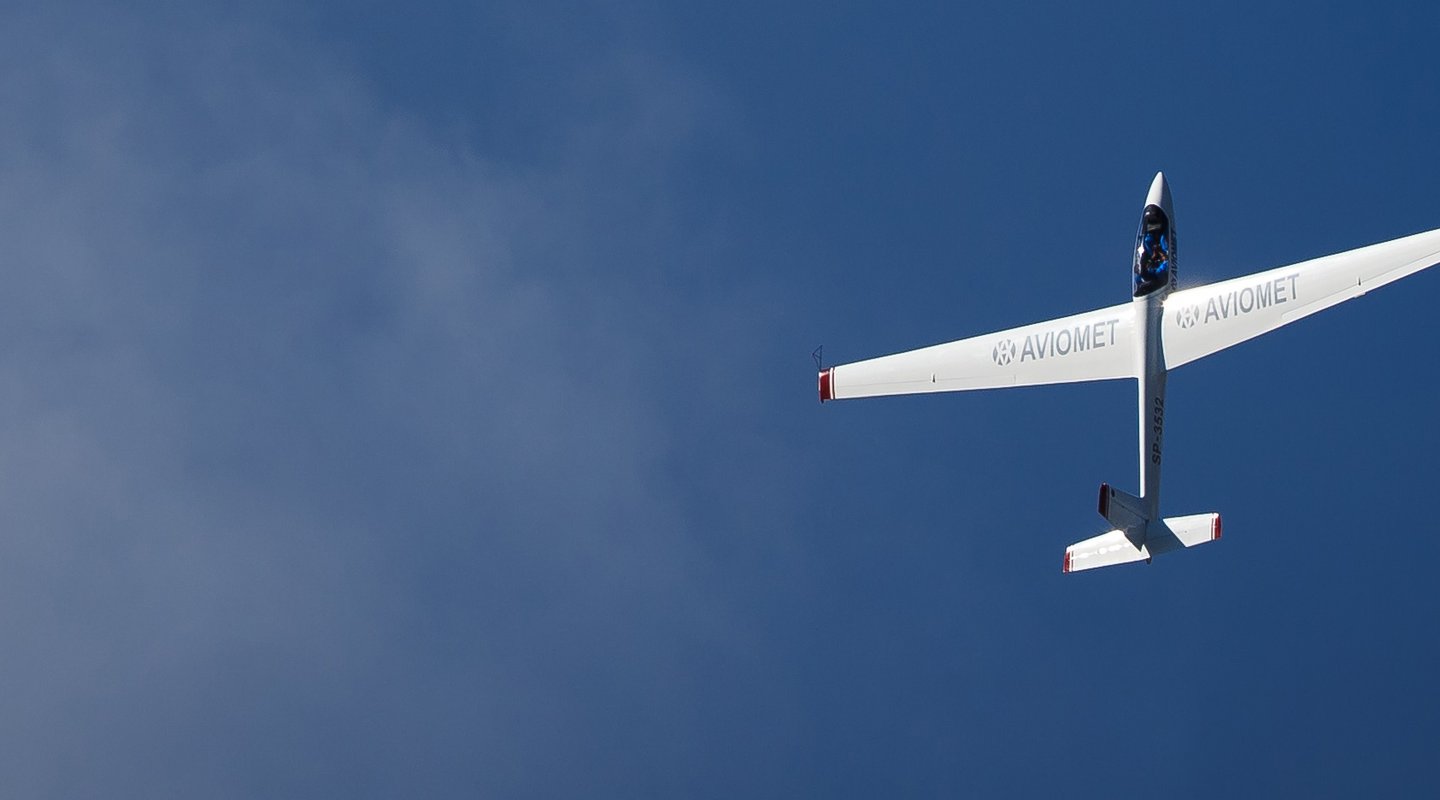 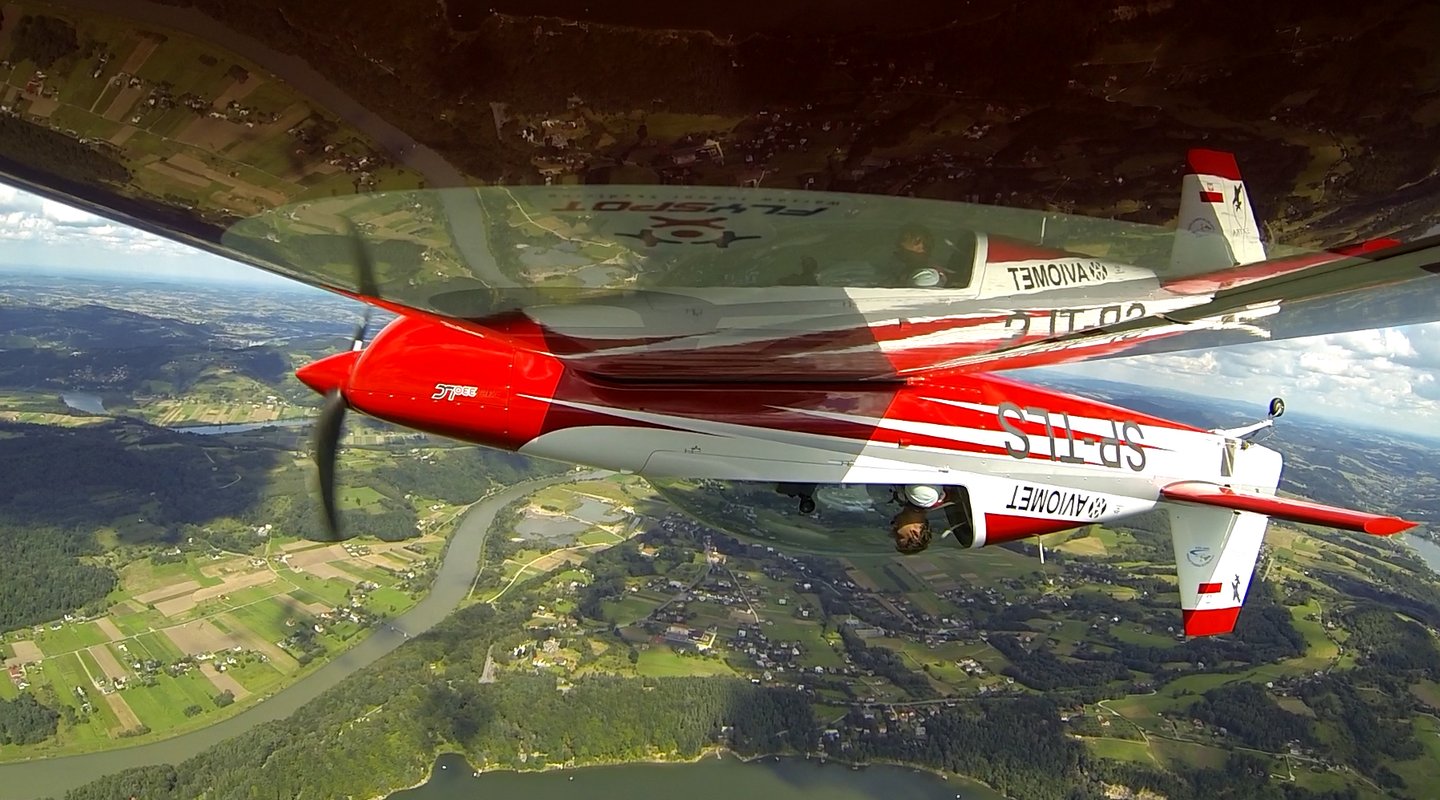