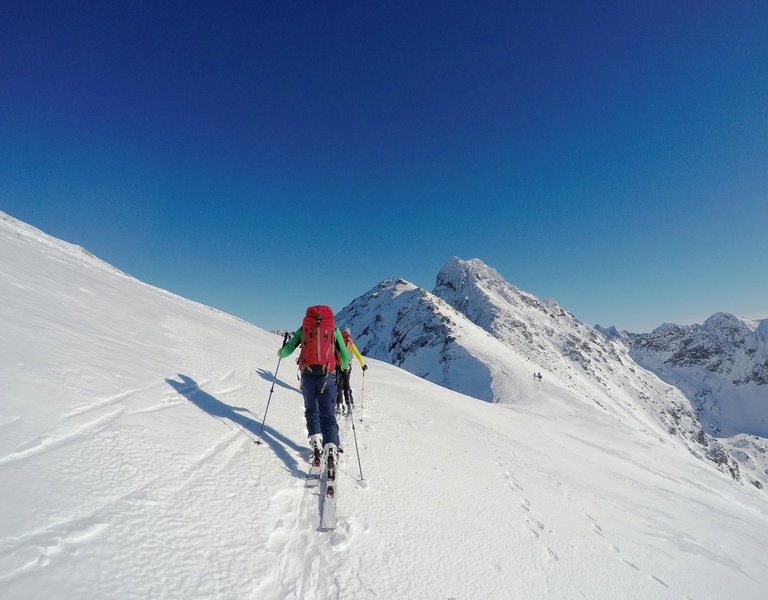 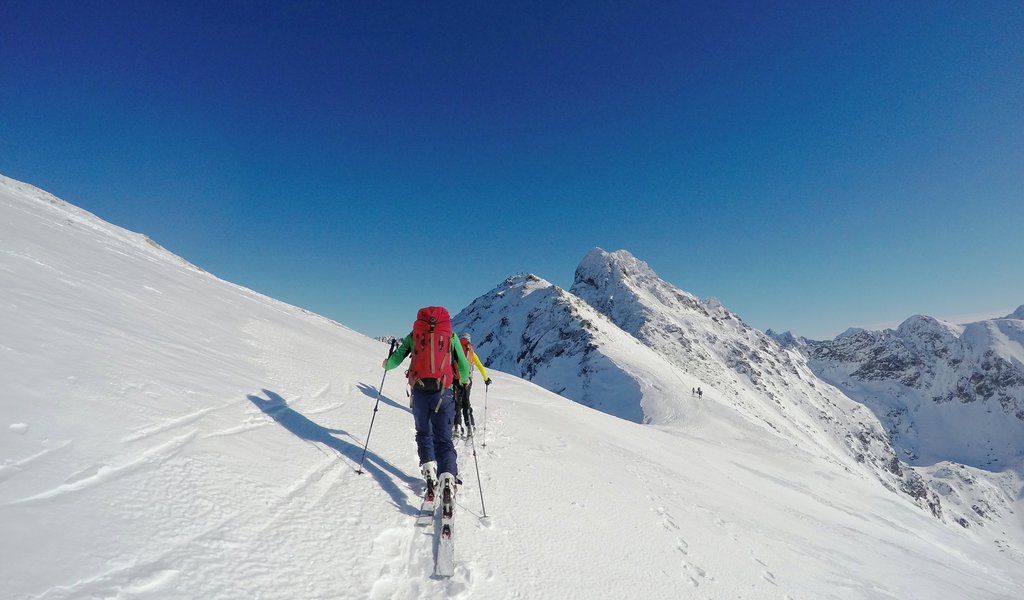 Ski touring around the Tatras

While some people prefer reaching the peaks of mountains in the comfort of ski-lifts, ski tourers choose to climb to the summit on their own accord, away from the commotion of crowded pistes

Although the Polish Tatras are not large, taking up an area of a mere 175 sq km, they nevertheless offer attractive ski touring and backcountry skiing opportunities. No wonder ski touring is becoming increasingly popular in Poland.

As in the old days

Piste skiing in the Polish part of the Tatras takes place largely in the region of Kasprowy Wierch (1987m), with the chair lifts in Gasienicowy and Goryczkowy cirques. The rest is mountain terrain unspoiled by ski infrastructure, so it takes just a minute to move away from the tourist-packed summit of Kasprowy to the pristine white surfaces of the wild and isolated Tatras. 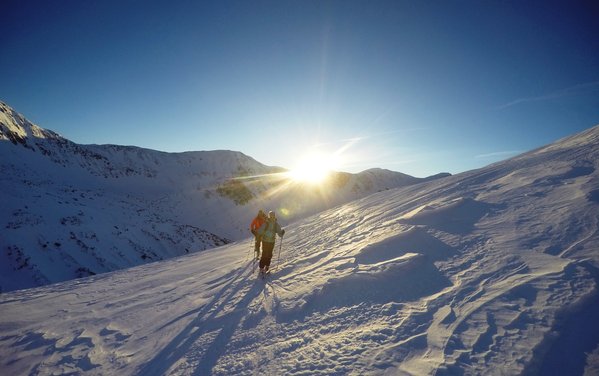 Until recently, most tourists would hike across Poland’s mountains on foot, and ski-borne people were a rare sight. Nowadays, parked ski touring equipment lines the walls of mountain huts during winter, and an increasing number of people are finding out that this way of getting around the mountains is more convenient and faster; and ascents are rewarded with downhill runs on untouched snow, to say nothing of the breathtaking scenery.

Ski touring skis and skins—strips of fabric with short hairs stuck to the skin bases during ascents that prevent the skis from sliding backwards—let you go both up and down the hill. This form of tourism goes back to the very first explorations of the Tatras in the early 20th century. With ski infrastructure not yet in existence at that time, the Polish pioneers of ski mountaineering— Mariusz Zaruski, Józef Oppenheim and Bronisław Czech—would hike in the Tatras in a similar fashion, doing first downhill runs from Tatra passes and summits. Many of those adventures could be deemed heroic today, considering the development of skiing equipment since then.

The region of Hala Gasienicowa, an alpine meadow and formerly one of the biggest sheep grazing grounds in the Polish Tatras, is among the most popular places to embark on your ski touring adventure. In good snow conditions it is accessible from Kuznice by the steadily inclined blue trail running mostly in the forest, or the yellow trail that leads through the picturesque Jaworzynka Valley and gets steeper beyond it. The Murowaniec hut, opened in 1925, and the Betlejemka alpinist camp are nearby, offering convenient accommodation. Hala Gasienicowa’s diversity is its greatest asset for ski tourers, hikers and climbers. From there, ski touring beginners can set off to Czarny Staw Gąsienicowy lake, surrounded by majestic ridges of the High Tatras, or try gentle skins up to the Karb or Liliowe Passes. Those who cannot handle powder snow yet but would still like to try their hand at ski touring can leave the Murowaniec hut, climb up Kasprowy Wierch and ski down the Kocioł Goryczkowy piste and all the way down to Kuznice. 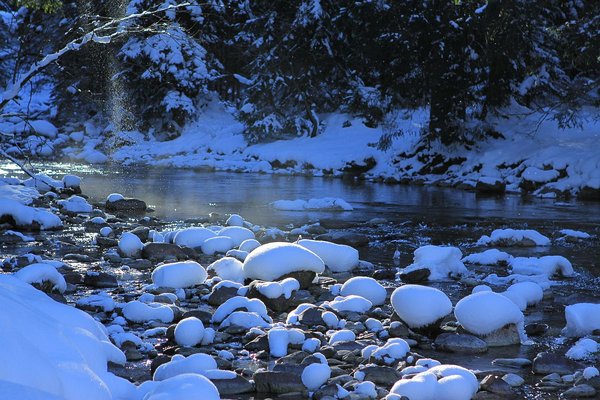 Hala Gasienicowa also offers an array of ambitious alpine tours and difficult runs down the steep ravines. From there, experienced ski tourers head to the Swinicka, Zawrat, and Kozia Passes or the Granaty ridge.

At its most beautiful in springtime

The West Tatras are also worth a ski touring visit. Their gentle slopes provide an interesting alternative to the granite mountainsides of the High Tatras. The region can be especially recommended when heavy snow falls and increased avalanche risks rule out going any higher. The West Tatras is a paradise for those who love forest downhill runs and beautiful spots for spring outings.

Many interesting ski touring routes start from the Chocholowska Valley, the largest and longest (10km) on the Polish side of the Tatras, which in springtime gets covered by a purple sea of crocuses. While winter still prevails higher up, the valley below beckons you to rest at the hut and enjoy the beautiful spring atmosphere. You cannot miss out on a trip along the West Tatras ridge, starting from Grzes (1653m), through Rakon (1879m) to Wolowiec (2064m). Another interesting trek leads through Trzydniowianski Wierch (1758m), from where you can continue along the ridgeline until Konczysty Wierch (2002m). The crowning point of a trip can be the ascent of Starorobocianski Wierch (2176m), the highest peak of the West Tatras and one of the favourite tongue twisters among the foreigners visiting the Tatras. You have got to admit the summit names on Poland’s map are anything but easy!

You will also find varied terrain around and above Hala Kondratowa—from a leisured stroll to Kalatowki and the classic assent of Kopa Kondradzka to an ambitious traverse of the Czerwone Wierchy hills. 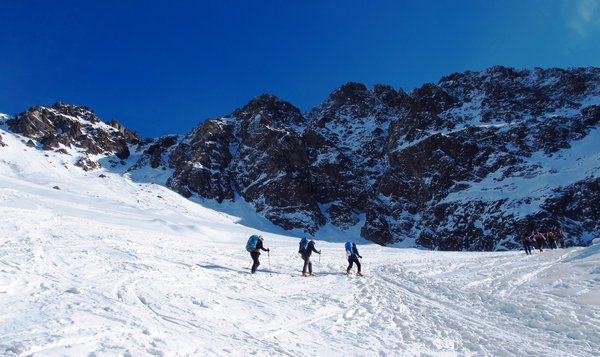 Before you go on a ski hike in the Tatras

The area of Morskie Oko lake is another beautiful ski touring region, albeit quite a demanding one. Unforgettable views reward the grueling effort; however, it is important to remember that it is one of the most dangerous places in the Polish Tatras in terms of avalanches. 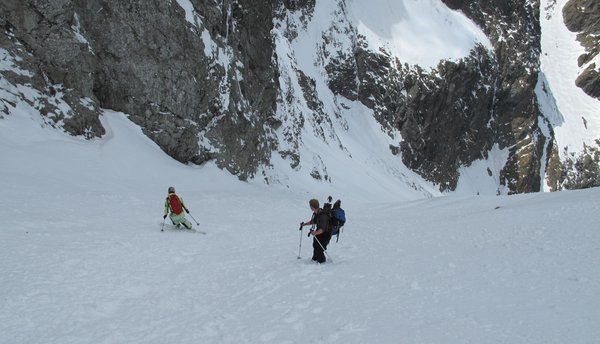 The hut at Morskie Oko offers a gorgeous vista of the towering peaks of Rysy (the highest mountain in the Polish Tatras, 2499m), Mieguszowiecki Szczyt (2438m), Cubryna (2376m) and the most distinctive one—the pointed top of Mnich (2068 m).

Late spring is the best season for skinning around this region. During this time, you will see downhill enthusiasts navigating their way around tourists sunbathing in front of the hut (easily accessible by an asphalt road from Palenica Białczanska), and heading for the snow-capped peaks.

Many alpine skiers think very highly of the Dolina Pieciu Stawow valley, with its hut being the highest-lying one in the Polish Tatras. The valley, the snow-covered frozen lakes and the mountainous serenity beckon, making you want to stay, even for a day; and the gullies above offer a multitude of skiing options.

Those not pressed for time might be tempted to set out on a trek that starts from the Dolina Chocholowska valley and ends at Morskie Oko. This almost week-long expedition, from one hut to another, across the mountain ridges, will be an unforgettable adventure for all who want to get to know Poland’s mountains better. Anyone who has been here, even once, will tell you that it is worth it!

Huts in the Polish Tatras recommended for a rest stop during ski touring expeditions: