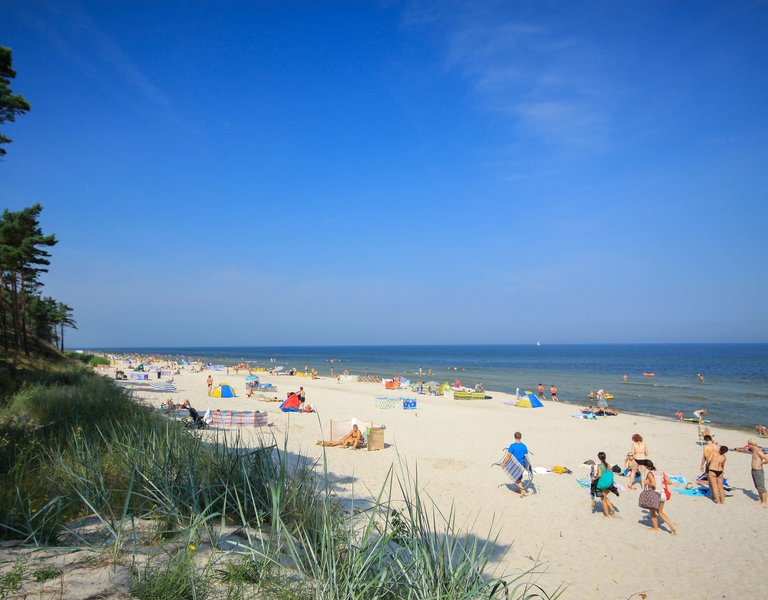 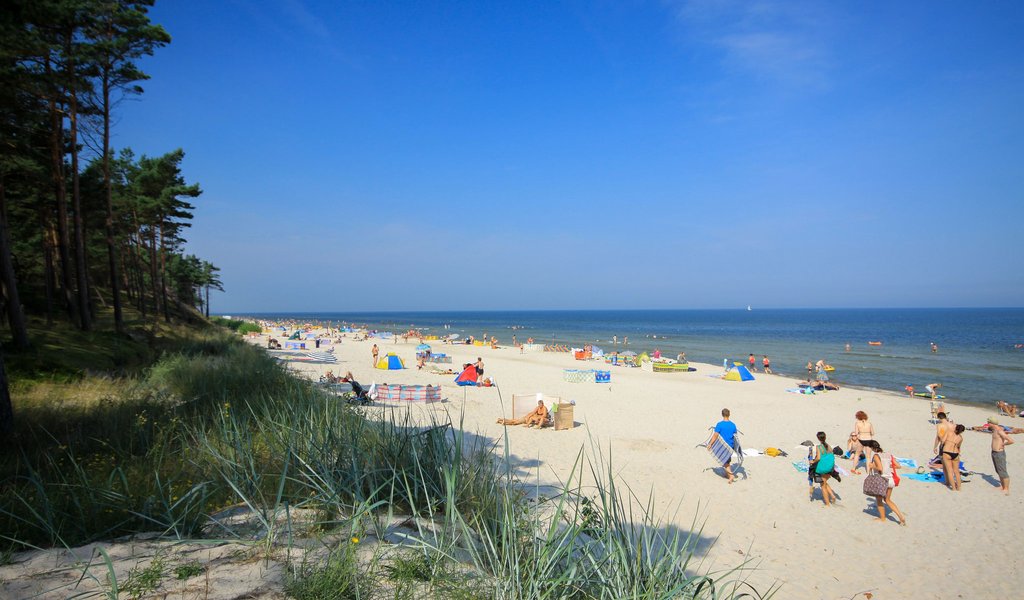 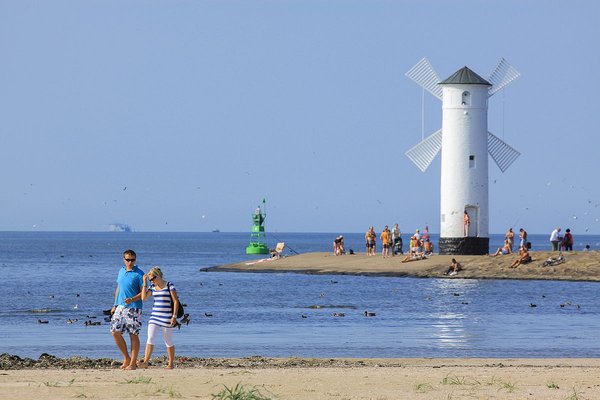 “Polish coastline is stunningly attractive because of its diverse landscape—dunes alternating with cliffs. Scenic beaches lie next to the Woliński and Słowiński National Parks, on the Hel Peninsula, and the Vistula Spit. The wild beach in Leba, on the outskirts of the Słowiński National Park, is my favourite, but I also like beaches on the Hel, especially along the seacoast between Jurata and the town of Hel,” says Marta Chełkowska, Director of the Department of Tourism and Promotion at the Pomerania Province Marshal’s Office and President of the Pomeranian Regional Tourist Organisation, whom I asked for advice when making a list of Poland’s loveliest beaches.

We set off on a tour of Polish beaches from the westernmost tip of the coastline, the isles of Uznam and Wolin. Here Swinoujscie reigns supreme, leading past and present rankings. Its beach stretches for almost 10 kilometres (3.7km on Uznam and 6km on Wolin Isles), and it’s also the widest natural Polish beach (over 200m in places). With water temperature reaching 25 degrees Celsius in summer—rare for the Baltic Sea—and its shallow seabed, the beach is a major tourist attraction. Its water cleanness and safety have been attested by the Blue Flag, an international certificate awarded for the tenth consecutive time in 2015. 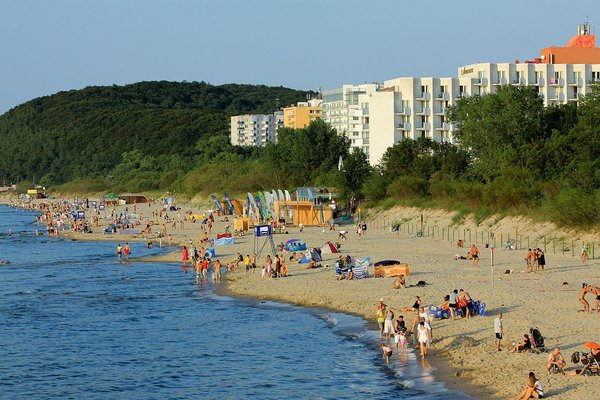 Miedzyzdroje on Wolin Isle, dubbed “Polish Cannes,” boasts its own Walk of Fame along the waterfront promenade, with handprints of Polish actors and filmmakers, in the fashion of its Hollywood original. The resort has a beautiful sandy beach divided by a 395-metre pier offering a view of the cliffs. Visitors to the nearby Woliński National Park are welcomed to take a walk along its routes, like the 19-km long “red” trail with a stop for a scenic view on Kawcza Gora, which runs along the seashore and cuts through the beach to Miedzyzdroje.

Going farther east, we reach Trzesacz, with its unique high cliffs changing into dunes and white sandy beaches. The village is famous for its Gothic church (turn of the 15th century) which used to stand in its centre, but now hangs ‘suspended’ on a high cliff that is being washed away by the sea. If you are looking for a ride in a historical carriage along the picturesque Gryfice – Pogorzelica route, you can hop on the train at the village station of the Gryfice Narrow Gauge Railway. 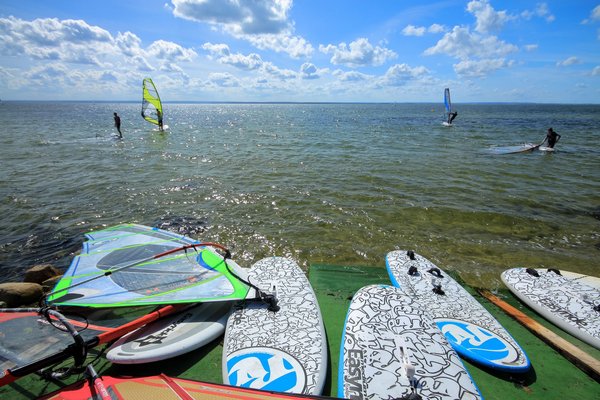 Next stops are Ustka and Leba, situated along the central coastline. Ustka is divided in half by a port canal; its eastern beach bustles with life along the promenade, while its western beach is more secluded. The sand here is fine, delicate and … there’s more of it every year because the town has been extending its beach by adding sand extracted from the port canal. Off season, Ustka draws many amber hunters.

In nearby Leba, the wide sandy beach is shielded by a strip of pine forest. The Słowiński National Park, a UNESCO biosphere reserve and one of Europe’s biggest clusters of mobile dunes, stretches westwards of the town’s outskirts.

Now we head for the Hel Peninsula, with such resorts as Chalupy (the capital of Polish naturists), Jastarnia, Jurata and Hel. The sand here is white and fine, and the beaches vast. With shallow waters and strong winds, the Hel Peninsula is Poland’s top windsurfing spot. There’s a railway line and a bike trail that run along the peninsula.

A long and wide beach in Jastarnia, separated from the town by a belt of dunes overgrown with pines, is another tourist attraction worthy of mention. 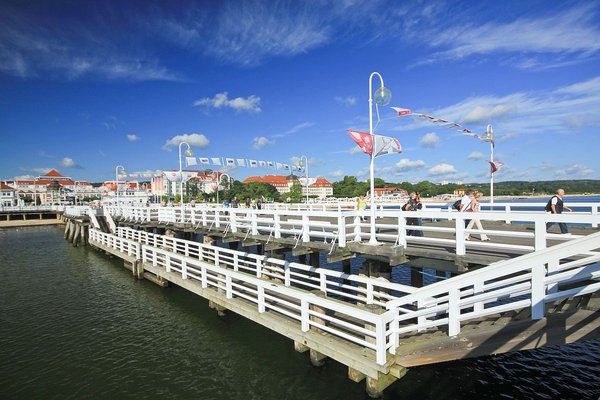 Hel, a former fishing settlement located on the tip of the peninsula, is surrounded by white sandy beaches on three sides. Beaches closer to Gdansk Bay have good facilities, while those lying north of the town of Hel, on the open sea, offer a more pristine landscape.

The 4.5 km long beach in Sopot, one of the best kept on Gdansk Bay, can be admired from Europe’s longest wooden pier (511.5 m).

Poland’s seacoast runs to the east as far as the Vistula Spit, a narrow strip of land separating Gdansk Bay and the Vistula Lagoon, overgrown with pine and beech wood. Its most scenic resort is Krynica Morska, with a promenade, a lighthouse, stylish guesthouses and a sandy beach.