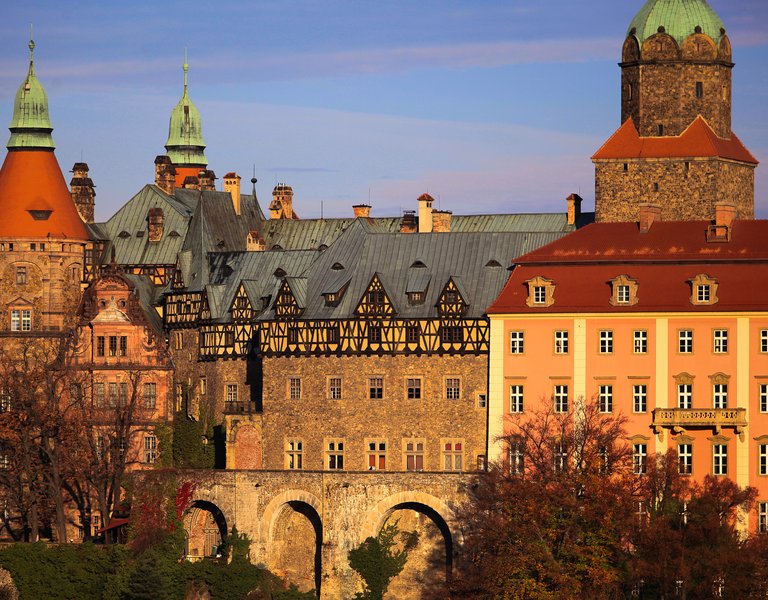 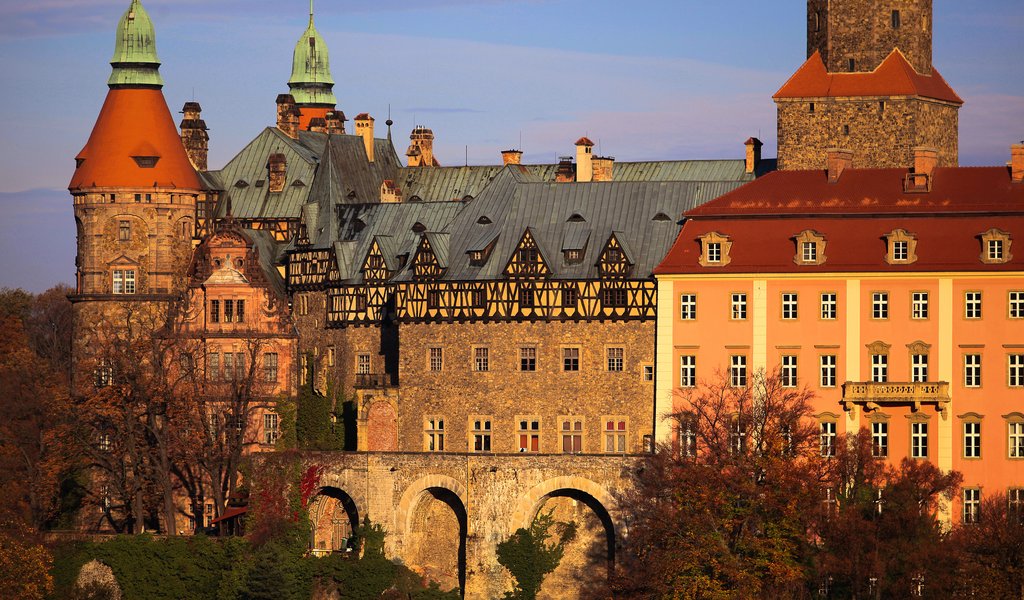 The Książ Castle is one of the largest castles in Europe, the third largest castle in Poland and the largest one in Lower Silesia. Visitors to Książ can wander around its beautiful terraces and listen to stories about Daisy von Pless, the beautiful yet unhappy owner of the Castle, who was given a six meter long string of pearls as a wedding gift from her husband.

Książ is a peripheral northern district of Wałbrzych (the Dolnośląskie Voivodeship) situated on the small Pełcznica River on a bend of the Pełczyna River, in the Książ Landscape Park. The location is famous for the late Gothic-Renaissance castle built in 1548-55 (from the remnants of the original castle of Bolko I the Strict, a Duke of Świdnica and Jawor, built in 1288-92), expanded in the 18th century and the first half of the 19th century. The Castle has over 400 rooms and its area exceeds 160,000 sq m. It was built on a steep rocky promontory, at an altitude of 395 m. The Castle is surrounded by a deep valley covered with forest. The Castle has a rough and varied history, just like its owners. 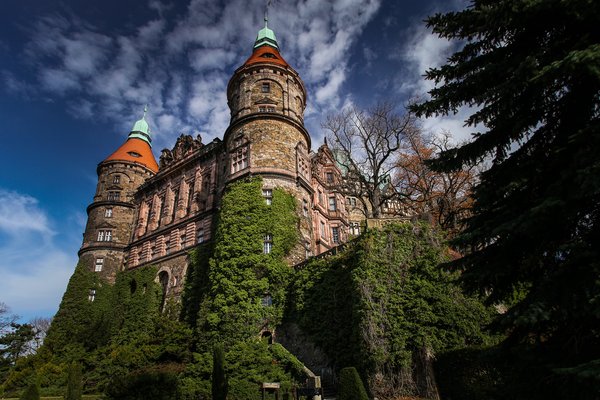 As one of many fortified castles belonging to the Duke of Świdnica and Jawor Bolko I the Strict, it was built in 1288-1292. It served an important strategic function and was considered “the key to Silesia”. The fortress was first known as the Duke’s Mountain and stood out from other buildings of its kind due to its location, which was not only convenient from a strategic point of view but also extremely picturesque as it was surrounded by forest. Bolko I called himself “the Master of Książ” and so did his successors.

The Castle was taken over from the Piast dukes by Czech monarchs to become - as a result of the Hussite wars - a hiding place of knights-robbers until King Władysław III of Poland (Władysław Jagiellończyk) became the overlord of Książ. Then the residence was pledged to the Hochberg family, who eventually bought out their feudal property, and the Castle became a hereditament of their family.

Thanks to this affluent Silesian family the Castle underwent numerous transformations. This process was launched by Hans Heinrich I who created the French gardens, while the dikes, ditches and moats and part of the walls were demolished. As far as the history of the Hochberg family is concerned, 1683 was a defining year as it was then that the family was granted the hereditary title of count (graf). In 1848 they were granted the hereditary title of duke.

In 1705-1742, Konrad Ernst Maximilian von Hochberg launched the so-called first major alteration of the Castle which involved building a representative Baroque wing, a Honorary Courtyard and outer castle facilities (outbuildings, a bathhouse, gate building, post and library). A summer pavilion was also built on Wzgórze Topolowe (Poplar Hill) to become – in the second half of the 19th century - a family mausoleum. In 1789- 1833, the immediate surroundings of the Castle began being developed on the initiative of Hans Heinrich VI. The so-called Old Książ, i.e. a fake ruin on the medieval foundations was also erected in the park. 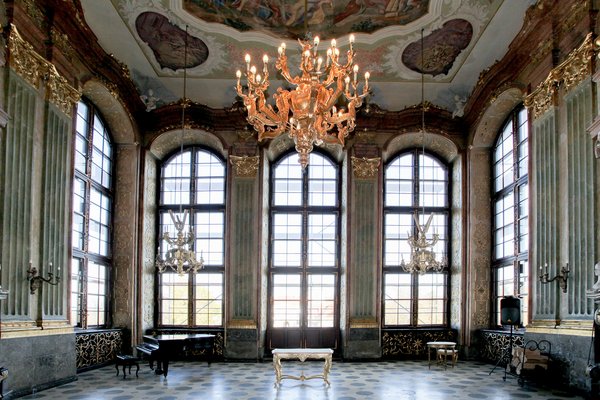 In 1856, Hans Heinrich XI – one of the most distinctive figures associated with the Castle – became the master of Książ. It is hard to list all the countless projects and alterations introduced by him but they include laying roads, arranging parks and forests, establishing a free culinary arts school for daughters of workers employed in the mines in Wałbrzych, providing evening education courses for young workers, supporting parishes irrespective of the religion and donating funds for funeral, hospital, widow, disability and retirement schemes. The Hochberg family was deeply involved in supporting those in dire poverty – at the end of the 19th century, the members of this family donated 60,000 marks a year for social causes! The reforms implemented by Hans Heinrich XI proved to be the foundation of the social reform pursued by Otto von Bismarck.

On 8 December 1891, Hans Heinrich XV, son of Hans Heinrich XI, got married in London to Mary Theresa Cornwallis West, known nowadays as Princess Daisy. The couple was blessed by Queen Victoria herself. Princess Daisy became one of the best known figures associated with the Książ Castle and still fascinates Castle visitors. In her memoir “Better Left Unsaid”, Princess Daisy described extraordinary relations prevailing in the Hochberg family and gave an account of the times she lived in.

In 1907-1938, the Castle belonged to Hans Heinrich XV, son of Hans Heinrich XI, who carried out the so-called major alteration of the Castle. In 1908-1923, two Neo-Renaissance wings – north and south – were constructed. The tower reached a height of 47 m and was topped with a spherical dome with a lantern. The Castle terraces were given their present form. In 1908, Hochberg also started building a Palm House as a gift for his wife, Princess Daisy.

In nearby Lubiechów, once part of the estate, tourists can visit the historic palm house built in 1911-1913 on the initiative of Hans Heinrich XV Hochberg, which was extremely costly at the time. The Duke ordered to lay the walls of the palm house with volcanic tuff brought in sixty wagons from Mt Etna. Nowadays, visitors to Lubiechów can admire over one hundred years old date palms, old cacti, banana, pomegranate, orange and tangerine trees, Coffea plants, myrtle and dracaena. According to the legend, instead of bringing his beautiful wife Daisy fresh flowers every day, the Duke decided to commission the building of this enormous glass-fronted building complex. This way the Princess could enjoy flowers any time she wanted. 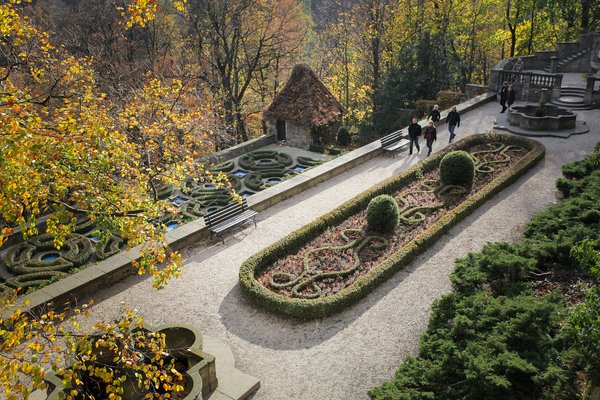 In 1941, the Castle was seized by the Nazis. During the war, Książ housed the collections of the Prussian Royal Library in Berlin. Notably, the sons of Daisy and Hans Heinrich XV fought against Hitler: Hans Heinrich XVII – in the British army, and Alexander – in the Polish ranks. In 1943, the Castle was taken over by “Todt” – a Nazi paramilitary organization. Intense works were carried out in the Castle at that time – it is presumed that plans had been made for one of Hitler’s main headquarters was to be set up there. Changes introduced by the Nazis are referred to as the third alteration of the Castle. At that time, tunnels under the Castle and the Honorary Courtyard were also made. Historians differ as regards to the purpose of the tunnels under the Castle and those made at that time in the Owl Mountains.

In 1945-1946, the Castle was occupied by Soviet soldiers who continued devastating the building. The collections of the Książ Majorat Library were seized (over 64,000 volumes). Most of them were probably taken to the then Soviet Union.

At present, the Castle houses a hotel, restaurants and shops with antiques. Visitors can choose from several guided sightseeing routes. The half-hour “Baroque Książ” route enables visitors to familiarise themselves with the history of the Castle and its residents. The route passes through the Green Salon, the representative Maximilian Hall, the White Salon, the Oriental Room, the Games Room and the Baroque Room to end at the Rock of Luck from which visitors can in summer – pass through through the Knights’ Inn – to the Castle terraces. 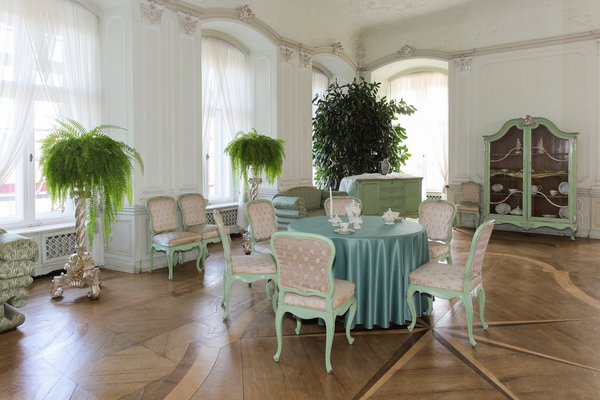 It takes one and a half hours to cover the guided route “From the Piasts to the mysteries of the Second World War”. Having seen the representative halls, tourists visit the oldest rooms redeveloped during the Second World War under the Riese project, namely to the underground tunnels dug when the Castle was being adapted to serve as one of Hitler’s headquarters. Then they are taken to rooms further afield: the Hunters’ Hall, the Ball Hall Complex, the Konrad’s Hall with the Black Courtyard. Visitors leave the terraces to enter the tunnel dug 15 meters under the Castle during the Second World War. Its 96-meter section available open to visitors ends with an unfinished staircase.

The over 2-hour “Daisy’s Route” includes visiting the Castle as in the “From the Piasts to the mysteries of the Second World War” option and is extended with the Castle terraces and the park. The old linden alley leads to the grave chapel of the Hochbergs, and then to the viewpoint from which visitors can admire the Castle and the Pełcznica River’s gorge.

Climbing up the Castle tower to see a beautiful view of the surroundings is another attraction for visitors. The Castle can be visited also without a guide, relying on information on tables instructing visitors which way to follow. However, this option does not include a visit to the third floor of the Castle and the tunnels underneath it.

Children will enjoy visiting the ghost room, while those keen on films can see the spots where films “Hrabina Cosel” (Countess Cosel) and “Trędowata” (The Leper) were shot. An interesting offer also been prepared by the Castle stables. Besides visiting the carriage house and the roofed riding arena built entirely from larch wood with no nails, visitors can also try horse riding or take a trip on a horse tram for twelve passengers, a hunting carriage, a vis a vis carriage intended for special occasions, a 5-passenger Victoria carriage and a smaller brake for seven passengers.