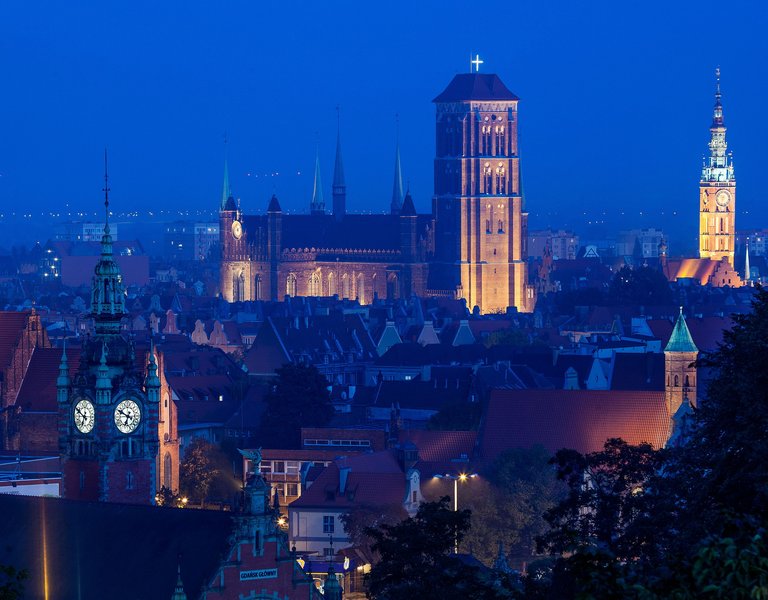 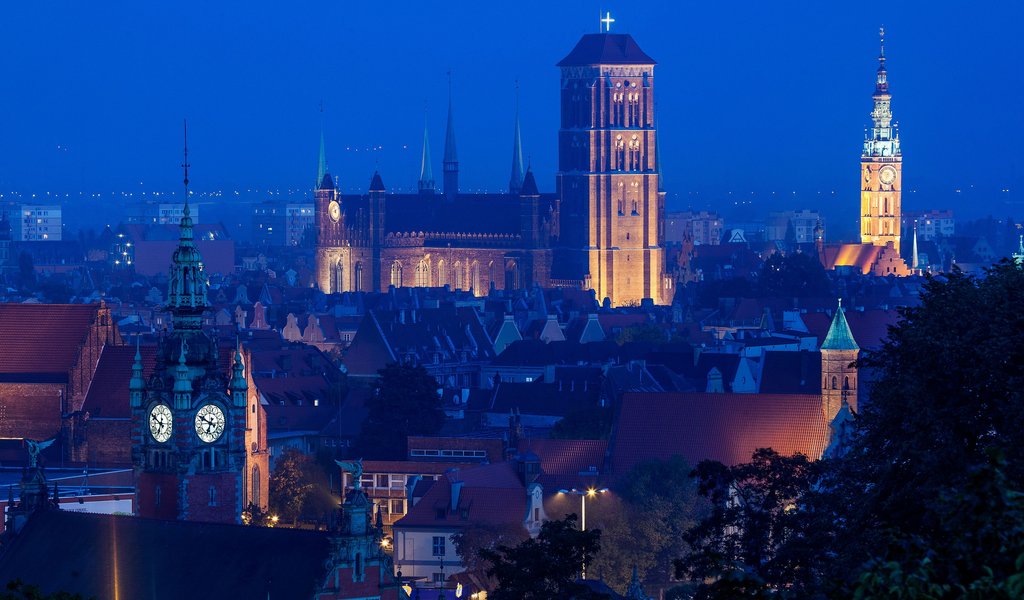 The gems of Gdansk

Gdansk’s Main and Old Town is one of the largest complexes of monuments in Poland. Most architecture and art treasures located in this area date back to the Gothic, late Renaissance and Mannerist periods.

A wooden frieze with gilded-winged cherubs, town councillors’ benches bedecked with intricate intarsia, a sandstone fireplace with polychrome bas-reliefs and, most notably, a timber ceiling whittled by woodcarver Szymon Herle and decorated with 25 allegoric paintings in gilded frames by Izaak van den Blocke. The Great Council Hall in Gdansk’s Main Town Hall, once the home of councillors’ debates, is a work of art and one of the most beautiful interiors in Gdansk. Its turn of the 16th century Mannerist décor was disassembled and taken out of the city in 1943, thanks to which it survived the war. The 14th-century Town Hall, bombed and burnt at the end of the war, was marked for demolition. Fortunately, it was possible to save it, and its reconstruction, which lasted over 20 years, is among the greatest achievements of Polish restorers. Today, the Town Hall is a very poignant testimony to the city’s past glory, which in the 15th-17th century was the most populous and wealthiest town in Poland. It was also the largest art, crafts and trade centre, as well as one of the main ports on the Baltic Sea. 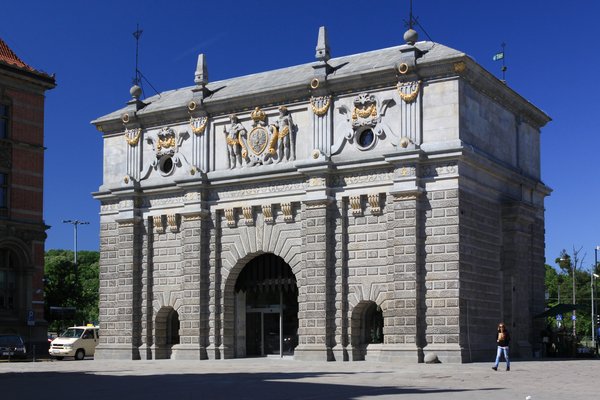 I start my visit of the Town Hall in the basement and finish it at the viewing gallery of its 50-metre high tower (it is worth coming here on the hour, when the tower’s carillon plays tunes on its 37 bells). In the sea of red roofs one can spot brick church towers. Intense midday sunlight brings out the decorative details of house facades from the shadows and amplifies the colours. In the maze of streets and houses one can catch a glimpse of blue meanders of the Motlawa River with boats moored to its banks. A navy blue streak of the Baltic Sea completes the horizon. The Town Hall is located at the junction of Dluga and Dlugi Targ Streets which form the so-called Trakt Krolewski (Royal Route), the most elegant route of the Main Town. Although it is only slightly longer than 500 m, I spend an entire day walking through it (and even then it turns out that is not enough). The Route starts with the Renaissance Brama Wyzynna (Highland Gate) which is the seat of the Pomeranian Tourist Information Centre. Right behind it is the Gothic-Renaissance complex of the second internal gate of Dluga Street. Originally part of fortifications and a prison, today the gate houses the Amber Museum, one of the most interesting in Gdansk. 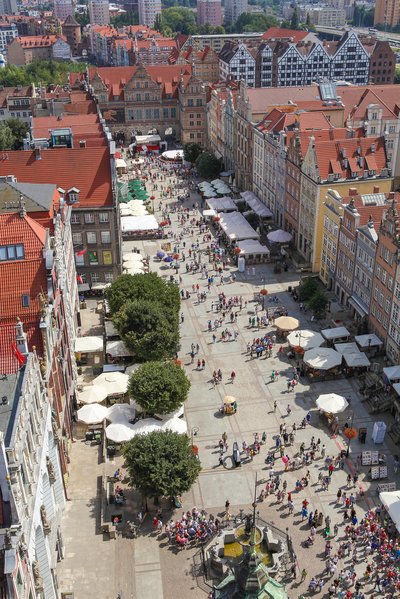 First I stop in front of the Uphagen House at 12 Dluga Street. Purchased in 1775 by the wealthy merchant and town councillor Johann Uphagen, the house remained in the hands of his descendants until the end of the 19th century. Today it hosts the Museum of Burgher Interiors. It looks the same as it did in the second half of the 18th century. “The objective of the museum is to recreate the essence of Gdansk, i.e. its bourgeois culture,” says Ewa Szymańska, custodian and director of the Uphagen House. “It is the only place where you can see how wealthy citizens of Gdansk once lived.”

In the carefully reconstructed entrance hall, living rooms, dining rooms and bedrooms I admire the stucco decorations on the ceiling, decorative panelling, faience stoves, furniture, ceramics and silverware. Each room has its own leitmotif, such as Ancient Greece and Rome, China, birds, insects, which testifies to Johann’s wide interests and erudition.

Another remarkable building is the Artus Court at 43-44 Dlugi Targ Street. Built in the 14th century, it was the meeting place of the Gdansk elite modelled on the legendary Round Table of King Arthur’s knights. Artus Courts were built throughout Europe, in particular in towns of the Hanseatic League. Gdansk’s court is one of the finest.

“The Artus Court is a place where generations of Gdansk’s inhabitants expressed their values through art: republican ideas, Lutheranism, links to the Republic of Poland, their relationship with the sea,” says Krzysztof Jachimowicz, adjunct of the Gdansk History Museum.

Most impressive is the Great Hall with its large-format paintings, a unique collection of tournament armour from the 15th century, ship models and panelling decorated with intarsia which reflects a wonderful golden glow in the afternoon sun. The most interesting exhibit is an 11-metre high furnace from 1545. Its 520 ceramic tiles feature European rulers and personifications of virtues. 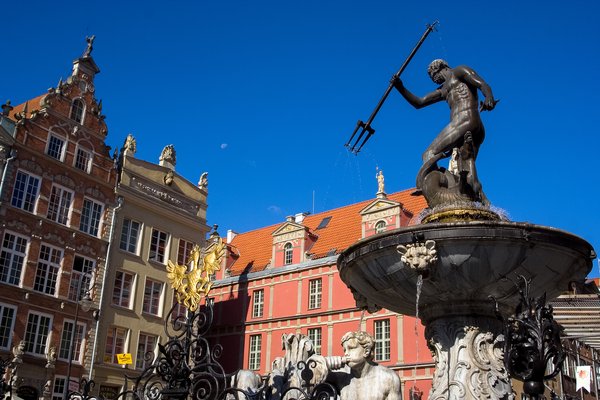 In 1633 a fountain of Neptune – the symbol of Gdansk – was placed in front of the Artus Court. Its replica, along with those of the court itself and the Monument of the Fallen Shipyard Workers represents Poland in the Mini-Europe Park in Brussels. Cast in bronze, the Roman god of the waters raises his trident, from which water spurts. A legend about the creation of Gdansk’s famous herbal liqueur Goldwasser is associated with the fountain. It was said that in the old days, rich citizens of Gdansk would throw gold coins into the stone basin of the fountain for fun. Since Neptune hit them with his trident and smashed them to smithereens, flakes of real gold have been added to the liquor.

From the east, the Royal Route is closed off by the mannerist Zielona Brama (Green Gate) with its four passages. Behind the gate I turn left to Dlugie Pobrzeze, a charming pedestrian street along the Motlawa River. It is dominated by a majestic port crane from the 15th century that was used to trans-ship goods and put up masts, and also served as a city gate. An interesting fact is that the driving mechanism made of immense wooden wheels, still in working condition, was originally propelled by men walking in it. 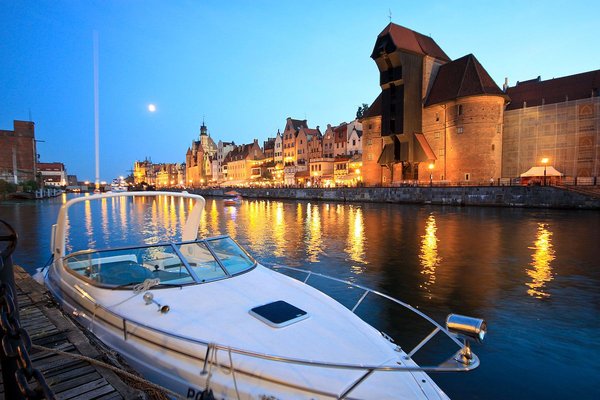 The crane is not far away from Mariacka Street. Almost all houses here have preserved porches in the form of terraces raised above the street level, typical for Gdansk’s architecture. The stairs that lead from the porches to the street are decorated on both sides with exquisitely carved stone banisters. Wrought iron railings connect them to posts or large granite balls at the base of the stairs. Dragon and fish-shaped stone gargoyles also form an integral part of the street’s architecture.

At the western end of Mariacka Street stands St. Mary's church. From the pavement it is hard to see how enormous this temple is, but from the Town Hall tower it can be admired in all its glory. Built over a period of more than 150 years (1343-1502), the Basilica of the Assumption of the Blessed Virgin Mary is the world's largest brick temple (105.5 m long, transept - 66 m wide, belfry tower - 82 m high). It is a gem of the so-called Brick Gothic, a variety of the Gothic style, popular in the Baltic countries. It is referred to as the crown of Gdansk. Its imposing, almost two metres thick walls and towers rise high above the rooftops. It is well worth climbing the 400 steps to get to the viewing platform on the tower.

27 massive pillars support the temple’s stellar and diamond vault, which is as high as 30 m. Over the centuries, the church received works of sacred art funded by wealthy families, fraternities and guilds. Despite the turbulent history many of them have survived to this day, e.g. an oak-carved high altar by master Michael from Augsburg with a scene of the coronation of the Virgin Mary in its central part (1517), a stone Pieta by an unknown sculptor (c. 1410), a two-metre high sculpture of the golden-haired Beautiful Madonna of Gdansk in a brocade gown (c. 1420), a fifteenth-century astronomical clock and a powerful pipe organ. 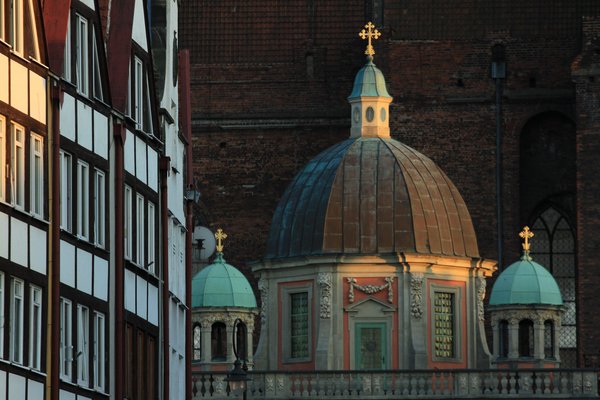 Of Gdansk’s countless churches, I am particularly fond of two. St. Catherine's Church from the first half of the thirteenth century stands out in the city’s panorama due to its 76-metre high tower, especially its magnificent Baroque cupola, with its 50-bell concert carillon. The church also houses the Museum of Tower Clocks, the only one of its kind in Poland. The tower was used by famous astronomer Johannes Hevelius (1611-1687) for his studies. Hevelius, commemorated by a marble and jade epitaph and a gravestone in the presbytery, was also a long time superior of the Protestant community at St. Catherine's Church. The vault hides an interesting crypt which contains bones discovered under the church. But most impressive is the Renaissance oak baptistery decorated with intarsia and numerous mosaics, bas-reliefs, herms, caryatids, putti, and mascarons.

My favourite one is St. John Church from the 14th-15th century. To this day it bears the tragic traces of 1945, when almost the entire city was reduced to rubble. Its monumental interior – desolate, burned, stripped of treasures – is a poignant sight. Of the countless works of art created by amber craftsmen, skippers, wood carvers, bakers and sailors, only some have survived. These include the main altar of sandstone and marble made by Abraham van den Blocke (1611), the gravestone of Nathaniel Schröder made of sandstone, marble and alabaster (1668), a carved, polychrome stall of the Church Council (1672), a brass baptismal font (1669), and epitaphs from the 16th and 17th centuries.

In 1995, the Baltic Sea Culture Centre opened the St. John’s Centre here. An area inside the church has been sectioned off to host concerts, plays and exhibitions. I arrive just in time to listen to rehearsals of The Magic Flute. Mozart’s masterpiece sounds so delightful here that I decide to abandon my sightseeing schedule. Without regrets, I sit in the audience and let myself get carried away by Mozart’s melodies.