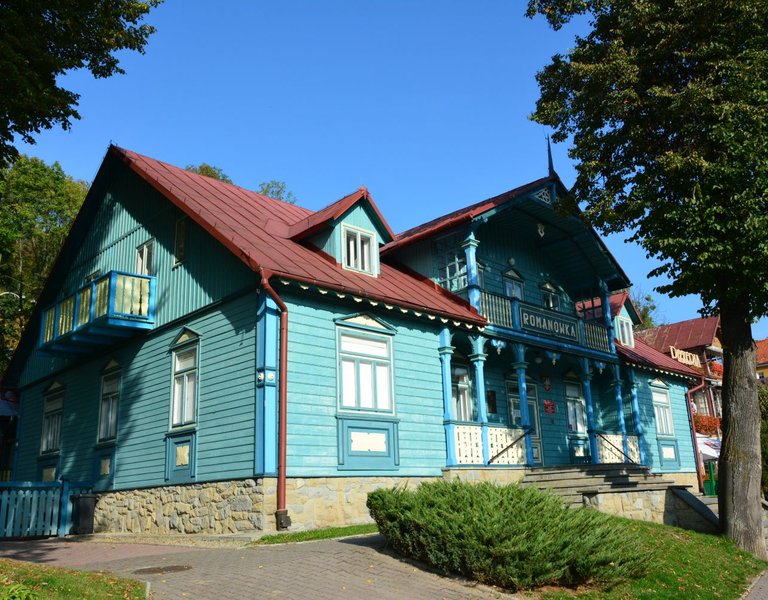 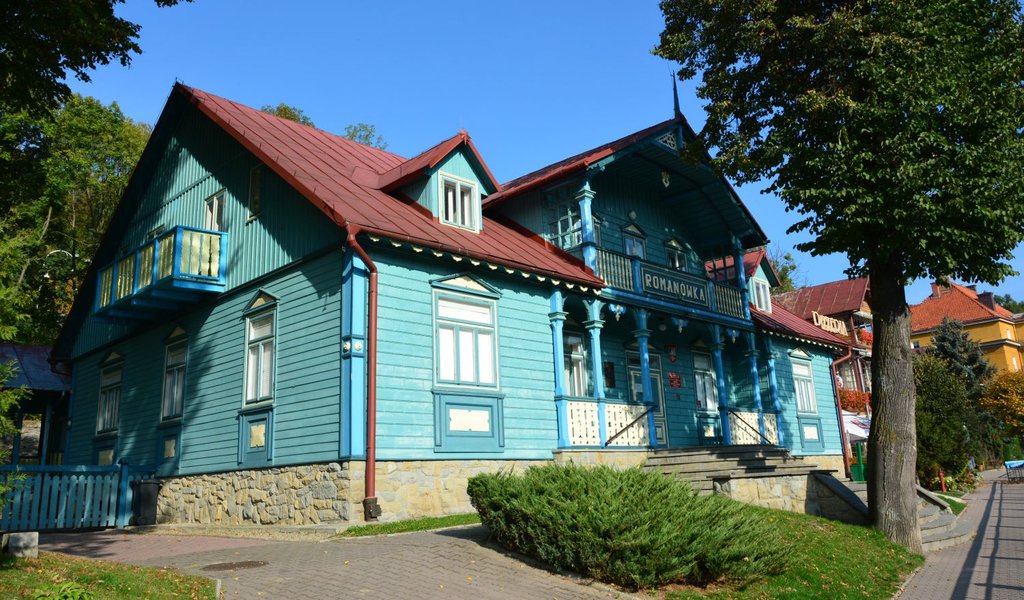 Krynica-Zdrój is the pearl of Polish health resorts, as well as the home of one of the greatest naïve artists in the world - Nikifor.

Wintertime in Krynica. You can hear snow squeaking under people’s shoes. A man appears, wearing a hat, with a cane and a wooden box full of painting tools, his gait unsteady. This is a scene from Krzysztof Krauze's film entitled "My Nikifor", with an outstanding performance by Krystyna Feldman, depicting the last years of the life of the "Matejko of Krynica". Nikifor (born Epifaniusz Drowniak in 1895) did not want to live anywhere apart from Krynica. Twice resettled to the Recovered Territories after World War II, he stubbornly kept returning to his hometown, making little of the official decrees. As portrayed in the movie, he walked through the town every day, holding his artist’s workshop in a box, in search of painting themes and fresh air. With a solicitation letter hanging around his neck, he accosted patients and tourists, trying to sell them his pictures. And although most of them did not see the artist in him, just a mentally handicapped beggar, it never discouraged him from painting - a passion to which he dedicated his entire life. 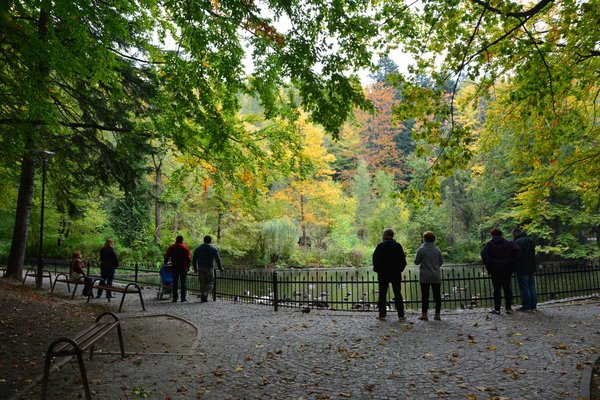 Krynica-Zdrój is located in the valley of the Kryniczanka stream, at the foot of the Parkowa mountain (741 m), between the Sądecki Beskids and the Lower Beskids. The area used to be the land of the Lemkos – an ethnic group created due to the mixing of the people of Polish, Ruthenian and Wallachian origin. Nikifor’s mother was a Lemko; his father was supposedly one of the artists visiting Krynica (rumour has it that it was Aleksander Gierymski).

Krynica has long been famous for its excellent medicinal waters - a variety of alkaline acidic waters (szczawy) with a high level of trace elements. The man behind the success of the spa in Krynica in the second half of the nineteenth century was Józef Dietl, a general practitioner, professor at the Jagiellonian University in Krakow and the father of Polish balneology. It was in this period that the most interesting health resort buildings in the centre were constructed, such as the Old Mineral Baths, where water and mud baths were offered, the neo-Renaissance Old Spa House with a beautiful ballroom – a health resort operating to date, as well as numerous pump rooms where patients could drink mineral waters, including Słotwinka, the oldest wooden building in the town, built in 1869. During the interwar period, Krynica became the largest Polish health resort and a favourite vacation spot for artists and politicians. Among them was the cinema star Eugeniusz Bodo, the pianist and composer Władysław Szpilman, and the opera singer Jan Kiepura, who built the still existing Patria boarding house, a true gem of modernism. 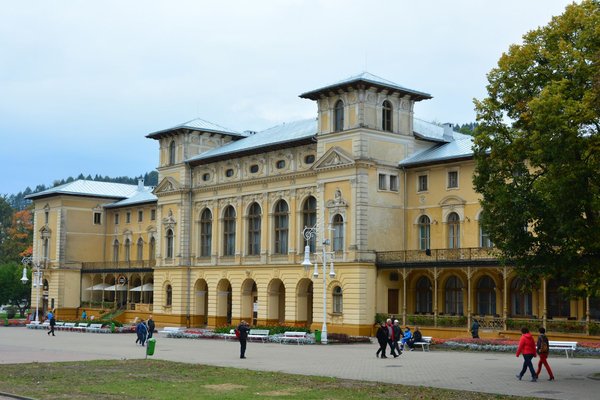 Krynica is also famous for its nineteenth-century wooden villas and boarding houses in the so-called Swiss style reminiscent of the architecture of Alpine spas. This was where Nikifor’s mother used to work as hired help, performing labour intensive tasks such as cleaning, stoking or carrying water. This architecture style is characterised by porches supported by pillars, verandas and arcades, balconies with carved ornamental railings, bay windows and turrets, decorative window and door frames, and formwork made of ornately cut boards. The most stylish villas can be seen in the town centre, at such streets as Bulwary Dietla (including the Węgierska Korona, Świteź, Kosynier, Willa Białej Róży, Witoldówka or Wisła, hidden behind the tall trees) and Kościuszki (including the Grażyna and Orlęta villas), as well as at Piłsudskiego and Pułaskiego streets.

You can walk (or ride the funicular) to the top of the Parkowa mountain, situated in the centre of Krynica. Along its wooded slopes, a network of gently bending alleys leads to the summit. As you walk to the top, you can see medicinal water boreholes and tanks, the forest shrine of Our Lady Queen of Krynica Springs, nineteenth-century wooden gazebos, waterholes and ponds - the habitat of numerous species of water birds, such as the mallard, teal, mute swan, Egyptian goose, Canada goose and shelduck. Particularly beautiful is Łabędzi Staw (Swan Pond), whose shores are surrounded by ancient trees that are rarely seen in Poland, such as the cryptomeria, red oak and Canadian hemlock. On a clear day, from the top you can see the beautiful panorama of the Sądecki and the Lower Beskids, the Great Fatra and the Tatra Mountains. 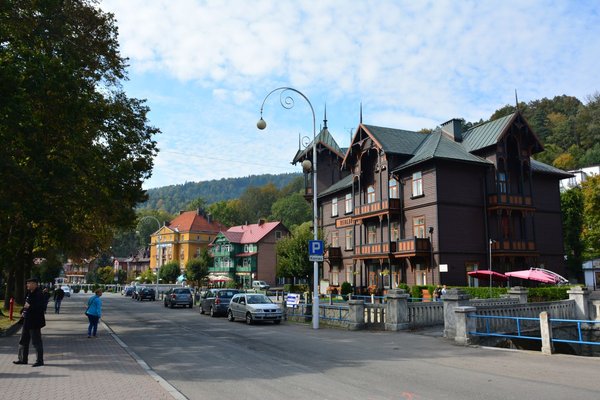 It is impossible to truly discover Krynica without looking at it through the eyes of its most famous admirer. Nikifor immortalised his town in countless pictures. He took particular pleasure in painting villas and boarding houses, Orthodox and Roman Catholic churches, health resorts and pump rooms. Some buildings have only survived in his pictures. While following the traces of Nikifor, I find the home of Stefania Krynicka in Krynica Wieś, where the artist lived in the 1950s, and his subsequent addresses, including the Szwarcówka villa on Kraszewskiego street and the Orlęta villa on Kościuszki street. You can still visit the wooden house of the Ferk family at Zieleniewskiego street where Nikifor had his painting table under the kitchen window, as well as the wooden hut at Puławskiego street, which used to be his summer studio. Nikifor himself, cast in bronze, is sitting on a wall in the town centre, with a brush in his hand, his characteristic suitcase, and a dog.

In 1995, in the nineteenth-century Romanówka villa at Bulwary Dietla, Nikifor's Museum was opened as a branch of the Regional Museum in Nowy Sącz. It boasts the world's largest collection of paintings and memorabilia of the artist, with over 1,000 exhibits. Nikifor’s talent was discovered by the Ukrainian painter Roman Turyn, who often visited Krynica. He discovered that Nikifor-the-autodidact had artistic intuition and great sensitivity to colouration, and he was impressed by the masterful colours of his works. It is thanks to him that Nikifor’s works were presented in Paris in 1932 as part of a collective exhibition. It did not, however, improve the overall situation of the artist, who still lived in solitude and severe poverty. His slurred, inarticulate speech (a defect he inherited from his mother), active tuberculosis, eccentricity and illiteracy prevented him from normal contacts with other people and consigned him to the margins of society.

It was only in the 1950s that Krakow art patrons Ella and Andrzej Banach took Nikifor under their wing. The first solo exhibition organised by them in Paris in 1959 marked the beginning of Nikifor’s international career. His works were presented, among others, in Germany, Austria, Belgium, the Netherlands, Sweden, Italy, the United States and Israel. Art experts analysed his paintings (over one thousand studies in many languages were dedicated to Nikifor’s art), and poets wrote sonnets about him. His life also became more tolerable due to the efforts of a Krynica-based artist Marian Włosiński, who became his legal guardian, providing him with his own workshop, shelter and health care.

The peak of Nikifor’s career was a large exhibition in Zachęta gallery in Warsaw in 1967. Nikifor died a year later in a health resort in Folusz near Jasło. He worked until the end. He was buried at the Krynica cemetery.

Nikifor was an admirer not only of Krynica, but of the whole Lemkivshchyna region. He depicted the beauty of his small homeland in a very suggestive manner. He was a hardworking man, and he treated his work as if it were a mission. He had no other occupation. He painted tens of thousands of paintings, mostly watercolours, the majority of which, unfortunately, were lost. Among them, experts have identified several thematic cycles. The most valuable in terms of art are the Beskid landscapes from the 1920s and the 1930s, with provincial railway stations and tracks and chequer patterns of fields and hills. They were the result of his countless train trips (usually without a ticket), which Nikifor loved.

His best works also include the so-called "fantastic architectures" presenting buildings of monumental dimensions and extraordinary richness of forms. As a lover of architecture, Nikifor painted offices, stations, factories, churches, synagogues, and especially Orthodox churches, where he had seen paintings for the first time as a child. Other central themes include the interior of a kitchen and the images of saints and bishops. 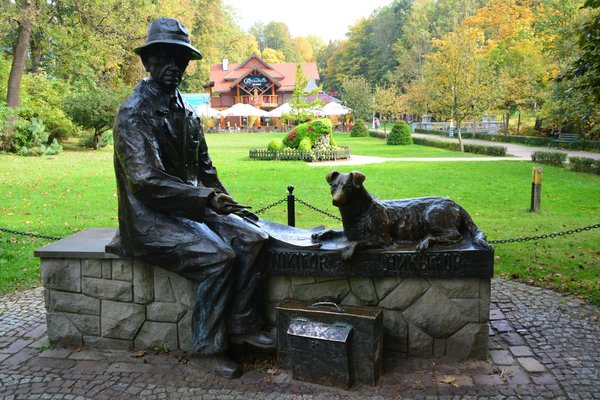 Nikifor felt that as an artist he was someone extraordinary, more important than others, who deserved a special place in society. Thus he presented himself as an elegant man in a hat, suit and tie, in a uniform or wearing liturgical vestments, with a halo, surrounded by hosts of saints. These self-portraits were a way for him to compensate for what he had never experienced.

The earliest photographs of Nikifor presented at the exhibition are from the 1920s and the 1930s. They depict a man of small stature, with a Chaplin-like moustache and round glasses, usually at work or with paintings in his hands, and near the end of his life - surrounded by patients and important visitors. One picture of Nikifor’s mother has also survived – a face without a smile, a scarf on the head, shoulders covered with a tartan shawl. The artist’s memorabilia include caps and hats, a transistor radio, a watch, glasses, a walking stick, and a sketchbook. And something very special - his workshop: brushes and paints, wooden boxes where he kept his tools, as well as solicitation letters and stamps of his own device, with which he signed his paintings. Nikifor could not afford any decent materials. He painted with children’s watercolours and crayons, often using both sides of virtually anything he could find: old school notebooks, official forms, cardboard, wrapping paper, old posters, and even cigarette packs.

"Dear guests. I, the undersigned naïve artist known as the Matejko of Krynica, in other words, Nikifor, ask you to buy my pictures or to offer me your help. I am a globally recognised artist; I had exhibitions in Paris and Amsterdam. One of my pictures would be the best possible souvenir from Krynica anyone can get", I read in one of his solicitation letters, through which Nikifor communicated with people (his friends wrote them for him).

In his poem entitled "Nikifor", Zbigniew Herbert wrote that "crumbs of rainbow live" in this unusual house with squeaky floors. I can almost see the artist sitting at the window over a piece of paper with a brush in his hand, staring at the rooftops of Krynica.