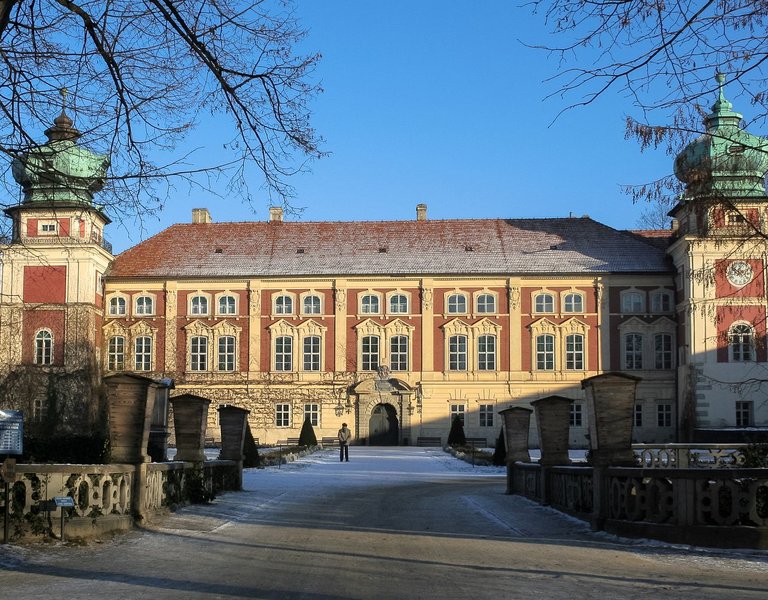 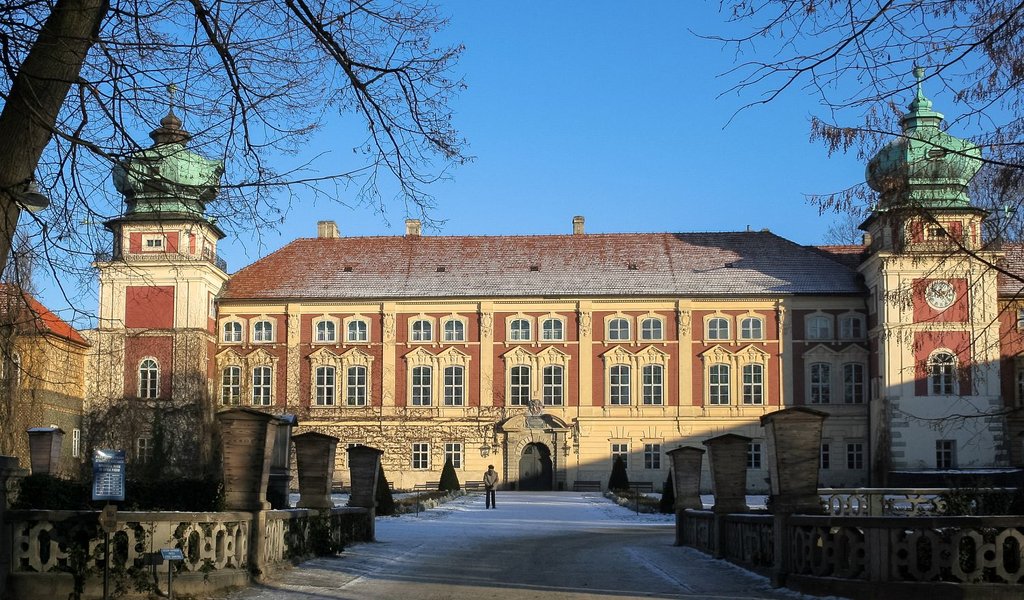 It is one of the most magnificent aristocratic residences in Poland. In the interwar period, it hosted the likes of Ferdinand I, King of Romania, Prince George, Duke of Kent, Ignacy Mościcki, President of Poland, as well as Mary Pickford, an American silent film star. 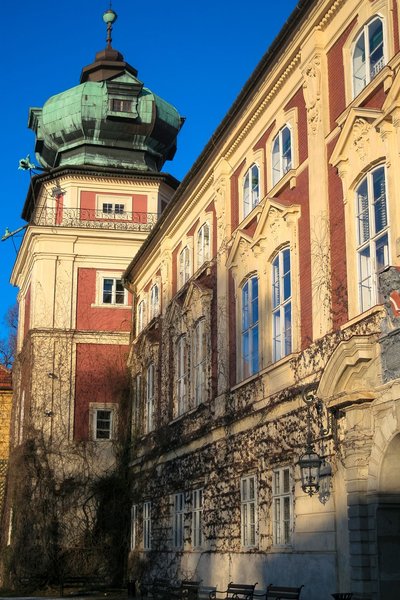 We were given felt slippers to move around the palace chambers. The inlaid floors, made skilfully by carpenters from Kolbuszowa, are almost 200 years old and the residential interiors are one of the most beautiful in Poland. An early Baroque palazzo in fortezza – serving both residential and defensive purposes – was built in the first half of the 17th century by Stanisław Lubomirski, the Krakow province and district governor. He hired, among others, Tylman van Gameren, a Dutch architect who designed numerous palaces, manor houses and churches as well as Giovanni Battista Falconi, an Italian stucco decorator and the most prominent interior decorator in Poland in the 17th century. Considered very modern at the time, the fortification of the castle was one of the strongest links in the defence system of the Commonwealth.

“The Lubomirski family lived in Łańcut for around 200 years. At the beginning of the 19th century, the residence was taken over by the Potocki family,” says Daniel Reniszewski, the head of the Library and Archives of the Castle Museum in Łańcut. Repeatedly rebuilt, the residence has retained a variety of styles and original interiors. The Castle comprises over 200 rooms. The decors of most of them date back to the 18th and 19th centuries, although the Great Vestibule, the Room under the Wooden Ceiling and the Zodiac Room can be traced back to the 1740s. The Lady’s and Man’s Apartments, consisting of living rooms, bedrooms, dressing rooms and bathrooms, served as a private area for the hosts, who lived quite a comfortable life. In winter they would sit at warm earthenware stoves whereas after the general renovation at the turn of the 19th and 20th centuries, they could would use bathtubs with running water. 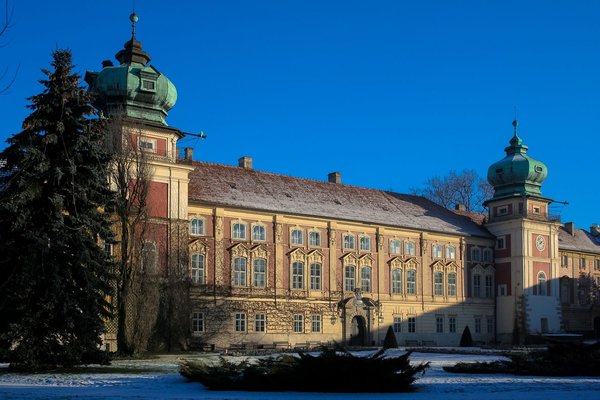 The classical Ball Room, whose ceiling is decorated with giant crystal chandeliers, is the biggest and the most representative room in the castle. In the evening, light emitted by the chandeliers falls on a plafond painted in clouds, creating an illusion of sunlight. The room has great acoustics which is the reason why it was used for holding concerts and staging performances, including even amateur opera pieces, as early as the 18th century. These traditions are continued to this day by means of the Musical Festival in Łańcut which has been held since 1961. “Moreover, every year, in late June and early July, we are visited by violinists from around the world, who come to us to master their skills by participating in special courses,” adds Daniel Reniszewski.

The Ball Room is adjacent to the only palace theatre in Poland, in which the premiere of Jan Potocki’s “Parades and Proverbs” was held. Potocki, the husband of Łańcut heiress Julia Lubomirska, was an extraordinary figure –  a writer, journalist, traveller, he was also a pioneer of historical and archaeological research in the Slavic language as well as Poland’s first aeronaut. Nowadays, he is mainly remembered as the author of “The Manuscript Found in Saragossa”, a frame-tale novel consisting of philosophical and fiction stories told within other stories. Its 1964 film adaptation by Wojciech Has is one of Polish cinema’s greatest masterpieces. Martin Scorsese incorporated it into his original review of “Masterpieces of Polish Cinema”, which was shown last year on tour around the United States and Canada. 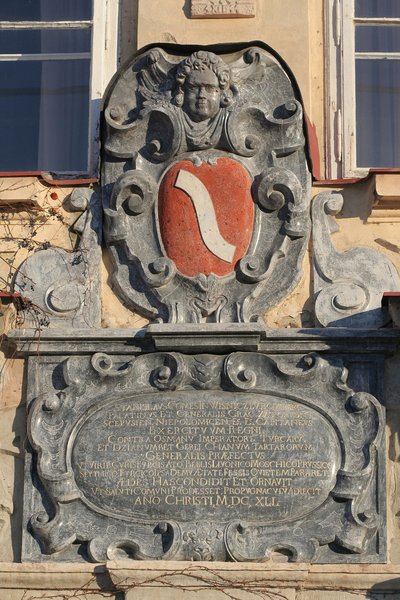 Most of the works of art, furniture, musical instruments, weapons, clocks and silverware gathered here over the ages have been preserved until the present day. The furniture is exquisite not only with regards to its appearance but also in terms of its practical nature – examples include an 18th century inlaid bureau containing lots of drawers which can all be locked using one key, a table for playing cards with retractable ashtrays as well as garden stools heated with charcoal.

In the corridors, there is an impressive collection of sculptures and paintings by both Polish and European artists. Looking at the portraits, one can see almost all generations of the Lubomirski and Potocki families. The noble man with a bristling moustache, full beard and a long lock of hair on the top of his shaved hair (a hairstyle resembling that of the Zaporozhian Cossacks, popular among Polish noble men) is Stanisław Lubomirski, the founder of the Łańcut Castle.

The castle’s book collection, which has been preserved almost in its entirety, consists of 22,000 volumes, including manuscripts, prints, periodicals, graphics, maps and music materials. “Formulae epistolarum”, i.e. “The art of writing letters” by Karol Manneken from 1491 is the oldest incunable,” says Daniel Reniszewski.  Other cimelia include the Basel edition of “Chronicles” by Marcin Kromer from 1555 and Dutch atlases from the 17th century.

Other places worth seeing include the stables and the carriage house which have a unique collection of more than 130 horse-driven vehicles and harnesses, some of them made for the Potocki family by the French firm Hermès. Also on offer are travel accessories and Jan Potocki’s hunting trophies. 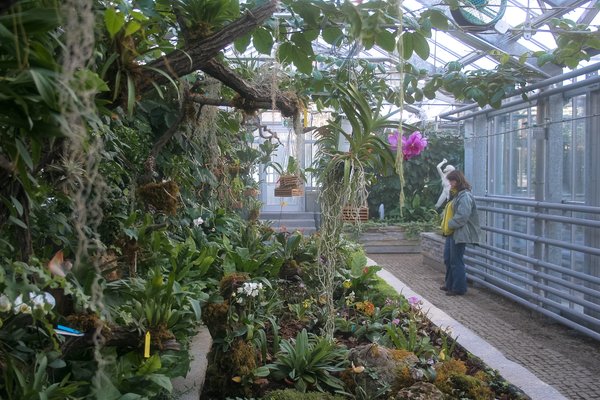 To keep up with the European trend of growing orchids, the Potockis had a greenhouse erected in 1904, in which they grew approximately 200 species of the plant.

Nowadays, visitors can admire around 900 species of them. Just like many years ago, the most impressive orchids adorn the interiors of the castle and please the eyes of visitors. “Flowers in the rooms used to be changed at least twice a day so that they matched the tableware,” says Danuta Pelc who looks after the orchids.

The castle is surrounded by a dry moat along which there is an alley lined with linden trees. Within the fortifications, a French garden with flowerbeds and fountains has been created, behind which there is a 30-hectare landscape park.