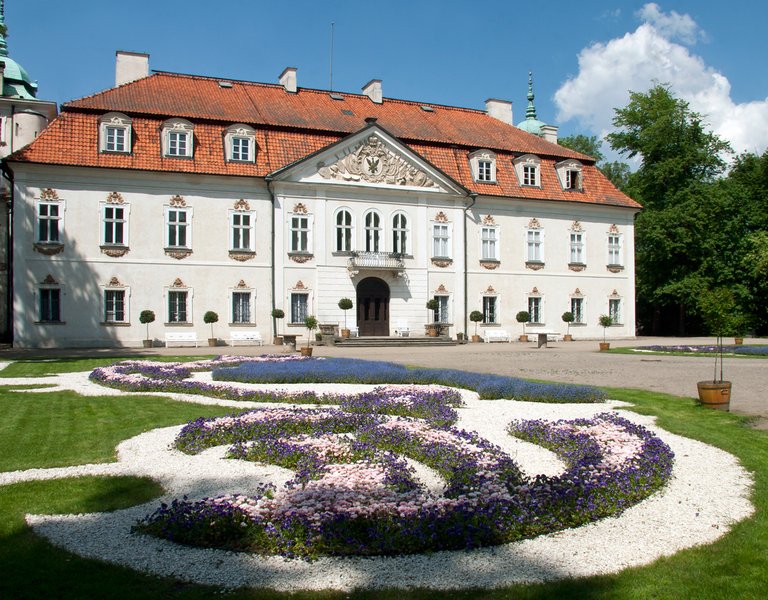 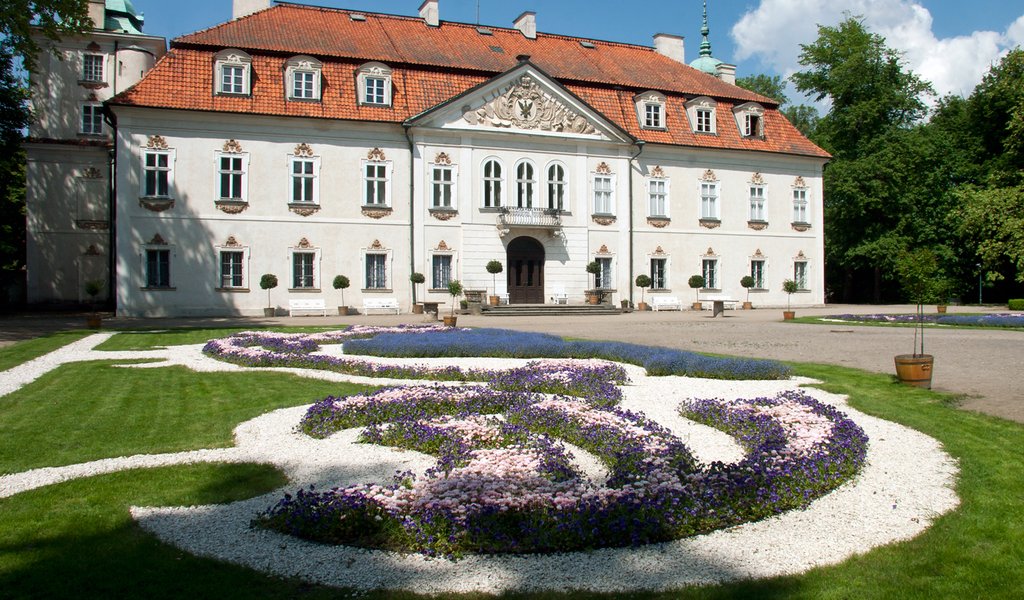 The baroque palace in Nieborow is not a typical museum. Its door is wide open to scholars and artists, offering them a friendly place to work. The 18th-century palace garden invites you to have a picnic, lie on a deckchair and walk your dog.

Trees are what’s most beautiful here: lindens, chestnuts and London planes. Some are so high that their tips seem to vanish in the clouds. Their shadows fall on parterres, boxwood mazes and manicured lawns. The regular landscape of a French garden is dotted with scenes of Mazovian countryside, such as a cart track crossing golden fields of corn. 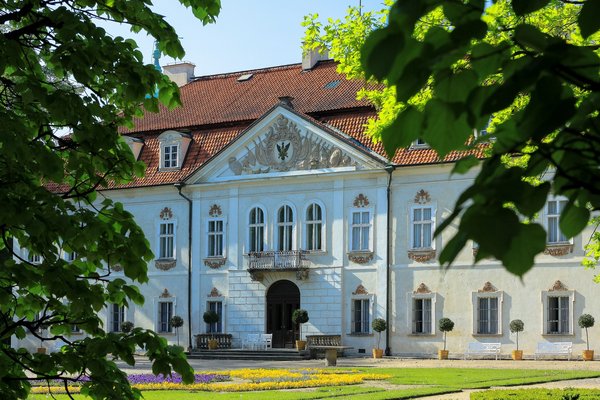 Bright walls, red mansard roof and two mellow towers stand out against the lush greenery. Designed by Tylman van Gameren, the architect of numerous churches and palaces across Poland, the baroque residence was built at the end of the 17th century. It would change hands many times until 1774, when it became property of the Radziwiłłs, a powerful Polish-Lithuanian aristocratic family, who owned Nieborow for nearly 200 years. “The palace with its surroundings and interiors is one of few in Poland to have survived the maelstrom of the last war,” says Anna Ewa Czerwińska, curator of the Museum in Nieborow and Arkadia, which was set up here in 1945 as a branch of the National Museum in Warsaw, together with the Romantic Park in Arkadia.

“Our most valuable treasure is Helena Radziwiłł’s collection of sculptures, including the head of Niobe dating to the 2nd century AD,” adds Monika Antczak, head of the Arts Department in Nieborow. In 2008, Niobe’s head was displayed at an exhibition in Rome, where the original torso had been found several years before.

Today, Niobe is on view in the palace’s vestibule. The main staircase, whose walls are covered with 18th-century cobalt tiles, leads to the first floor with its drawing rooms, studies, bedrooms and library. Previous owners left behind their furniture, clocks, silverware, porcelain and paintings. Two masterpieces stand out among the latter: a romantic and delicate portrait of Aniela Czartoryska née Radziwiłł painted by Elisabeth Vigée-Lebrun, the court painter of Queen Marie Antoinette of France (in the Voivode’s Bedroom), and a full-length portrait of Anna Orzelska, an illegitimate child of Augustus the Strong, painted by Antoine Pesne (in the Red Drawing Room). “Rumour has it that the king had as many children as are days in the year, but he would only own up to few,” says Monika Antczak. “He loved Anna very much. Famous for scandals and partial to drugs, she was one of the most beautiful women of her times. In the evenings, she is said to descend from the portrait and take a walk around the palace.” 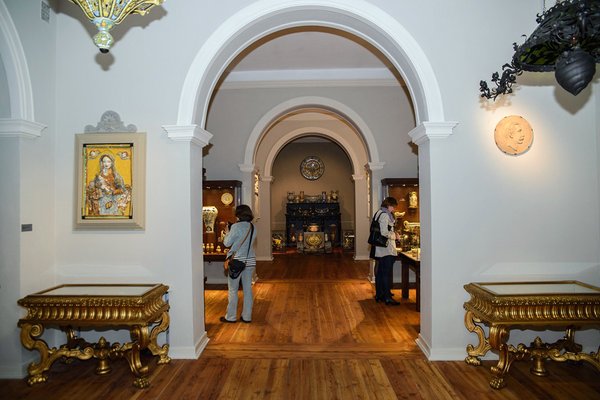 In 1881, Michał Piotr Radziwiłł established a workshop of artistic majolica at Nieborow, which created decorative stoves, fireplaces, vases, amphorae, plates and bibelots. At first, the artists and craftsmen working here followed Italian, French and Dutch examples, but soon they introduced some national motifs, drawing on Polish landscape and history (e.g. the collection of plates depicting Polish kings). Today these traditions are cultivated by a contemporary workshop of artistic majolica, which produces signed copies of 19th-century majolica from Nieborow, and a range of affordable souvenirs. Visitors can fathom the secrets of this craft during ceramics-making workshops. The majolica exhibition was opened in 2015, marking the museum’s seventieth anniversary. Unique majolica decorations, comprising the chapel, the floor, candlesticks, the rail and stoups, have also been preserved at the Saint Mary of Sorrows Church in Nieborow.

Mahogany cabinets in the library contain some unique old prints (about 12,000 volumes). The oldest one, called Łaski’s Statutes, dates from 1506 and includes Bogurodzica, the oldest text printed in Polish. You mustn’t miss out either on two huge globes from the 17th century, created by the Italian geographer Vincenzo Maria Coronelli. 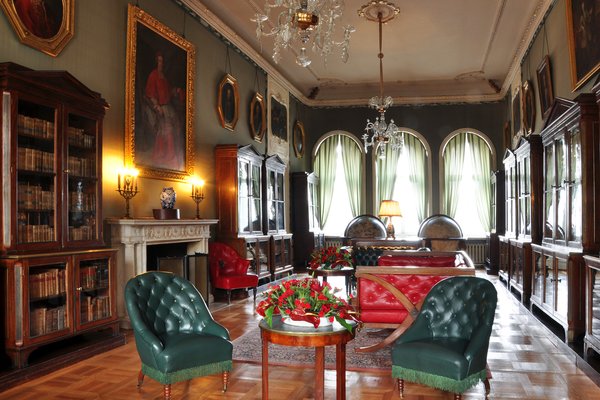 The Radziwiłł family was renowned for hospitality. In 1944, they took in refugees from ruined Warsaw, most of whom where members of the intelligentsia, and helped them to continue their work in the difficult post-war reality. This beautiful tradition survives to this day. Among the creators Nieborow has hosted are the writers Ryszard Kapuściński and Sławomir Mrożek, the sculptor and painter Xawery Dunikowski, the poet, playwright, filmmaker and screenwriter Jean Cocteau, the poet Paul Éluard and the pianist Artur Rubinstein.

The Palace kitchen specialises in traditional meals prepared in a woodfired oven. Guests sit down together at a table in the Venice Hall. “Nieborow is not just a museum, it is primarily a family estate, full of priceless collections,” underlines Anna Ewa Czerwińska. “We would like our guests to enjoy the atmosphere of a residence that’s alive.”