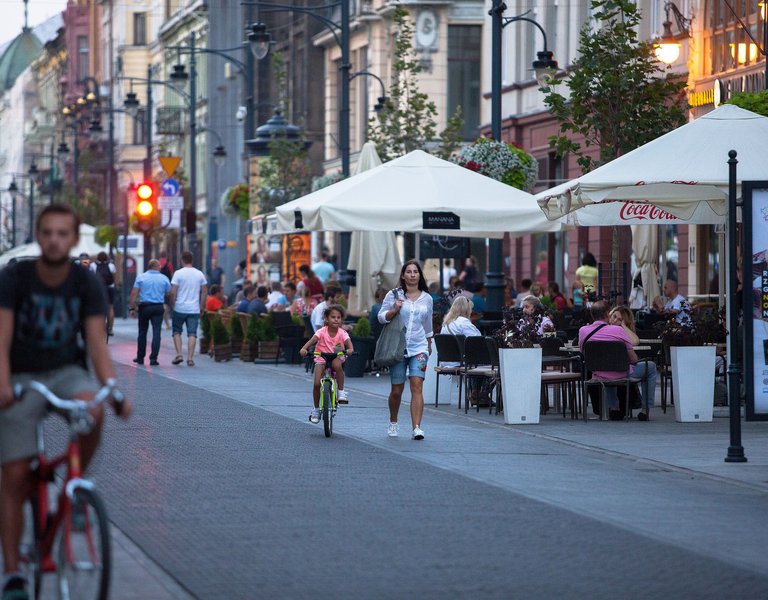 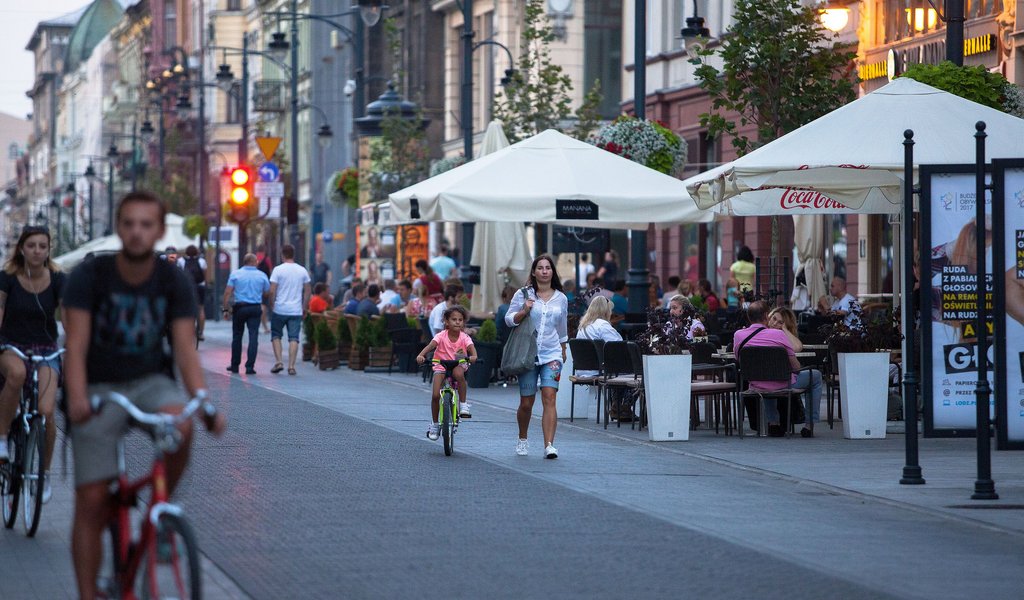 Piotrkowska Street – the heart of Łódź

Piotrkowska Street, also called Bigel or Pietryna, is the longest street in Poland – it is 4.2 kilometres long. Historic residential and industrial buildings of the nineteenth and early twentieth century are clustered around it.

Initially, Piotrkowska Street was a standard tract leading from Łódź to Piotrków Trybunalski in the south and to Zgierz and Łęczyca in the north. The classic city centre with a market, shops and the amenities of public life focused around it never took shape in Łódź. Piotrkowska Street has assumed this role with time. 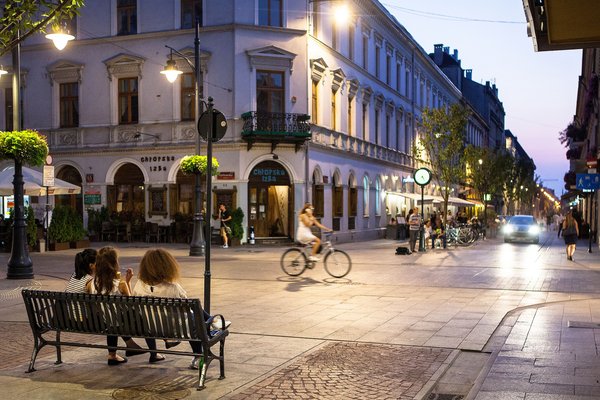 Today, the street running meridionally from the Liberty Square (Plac Wolności) to the Independence Square (Plac Niepodległości) is the commercial and cultural heart of the city, a favourite meeting place for the residents of Łódź and tourists. Festivals, concerts, sporting events, happenings, fests and fairs are held here.

The northern part of the tract between the Old and the New Town Square (today's Nowomiejska Street) began to be called Piotrkowska Street around 1815. The first plaque with its name was nailed up in 1823. Five years later the name was officially confirmed and marked on the map.

Łódź was granted city rights as early as 1423. Over the centuries, however, it was a predominantly agricultural city In the nineteenth century, it became one of the largest centres of the textile industry in Europe (it has maintained this status to this day – plants producing silk, cotton, wool, felt, knitting and hosiery, decorative fabrics industry, as well as numerous scientific research institutes, among others, of textile industry and synthetic fibres, all operate here).

The first drapers and weavers settled in Piotrowska in 1923. Numerous manufactures of cotton, wool and linen fabrics, which exported their commodities to Russia and China, were created here. Among others, in 1837, the cotton weaving plant of Ludwig Geyer called the White Factory started under No. 282 – it is one of the greatest monuments of industrial architecture in Poland, now the headquarters of the Central Museum of Textiles.

In the second half of the nineteenth century, large modern enterprises began to emerge, including the plants of Karol Scheibler, Izrael Poznanski or Ludwik Grohman. At the turn of the century, Łódź became the largest industrial centre of the Polish Kingdom. And Piotrkowska Street flourished along with it. In 1887, the Grand Hotel, designed by Hilary Majewski, opened at No. 72 (originally, a factory of wool and cotton products owned by Ludwik Meyer). In 1888, Victoria theatre, later transformed into the Polonia cinema after World War II, began functioning at No. 67, and in 1899, the first permanent cinema in the Polish land started at No. 120. In 1912, at Skorupki Street No. 9 near Piotrkowska Street, a neo-Gothic Church named after Stanislaus Kostka, the highest in Łódź, was erected and, in 1920, raised to the rank of cathedral, and in 1992 – the Archcathedral.

Many pioneering actions in the history of the city are connected with Piotrkowska Street. It was here that the first brick house was raised at No. 243 in 1835. In 1869, the Łódź Society of Gas installed gas lighting for the first time. In 1876, the first stone pavement, the so-called cobblestones, was laid along the entire length of the street, and in 1898 the first electric tram trundled down this stretch. 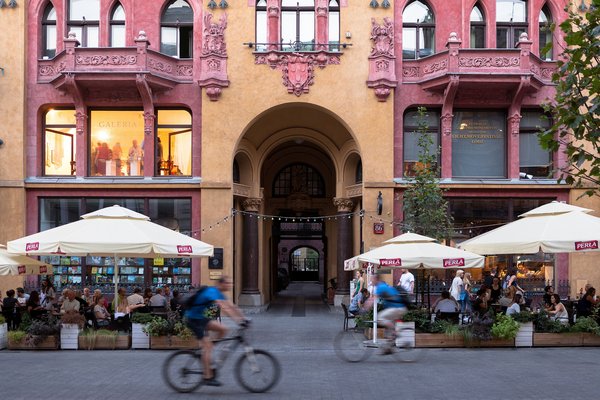 Piotrkowska Street was a prestigious address, plots were much more expensive here than in the outskirts. This resulted in the the great density of villas and palaces of city entrepreneurs, tenement houses and public buildings in various architectural styles. They include: the neo-Renaissance palace of factory owner, Juliusz Heinzel, at No. 104, the tenement of printer and founder of the first newspaper in Łódź, Johann Petersilge, with a rich eclectic façade at No. 86, the palace of one of the greatest industrialists in Łódź, Karol Scheibler, with a neoclassical façade at No. 266, or the palace of industrialist Juliusz Kindermann in the Italian Renaissance style with a unique mosaic frieze made by the Venetian stucco workshop at No. 137/139. When, in around 1900, Art Nouveau began to dominate art and architecture, Poland's largest complex of Art Nouveau architecture was formed in Łódź.

The post-war years were not favourable for Piotrkowska Street. Many nineteenth-century tenement houses were demolished, and crumbling decorative elements on facades were removed. The situation changed after 1990, when at the initiative of the city architect, Marek Janik, a member of the artistic group Łódź Kaliska, the Foundation of Piotrkowska Street was established. Its main objective was to revitalise Piotrkowska Street, preserving its historical and cultural heritage and transforming it into a pedestrian precinct. The revitalisation was carried out in 1990-1997 and 2012-2014.

As a result, decorative sets and street lamps in the modernist style appeared in a few sections of the street. Tenements and palaces, in which restaurants, cafés, pubs and shops opened, came back to life. Initially, mainly façades were renovated, but with time the restoration work began to reach the backyards and annexes. The foundation also came up with the idea of a unique Monument of Citizens of Łódź at the Turn of the Millennium – created by the residents of Łódź as an expression of devotion to the city and involvement in its matters. It consists of nearly 17,000 paving stones with cast-iron plates on which the names of the founders are engraved. They are mounted on the pavement of Piotrkowska Street between Tuwim Street and Nawrot Street.

Street springs with drinking water in the form of granite columns with sculptures of children and fish also appeared at Piotrkowska Street – this was the idea of the Water and Sewage Company in Łódź. The instigators behind this initiative are the Łódź artists, Magdalena Walczak and Marcin Mielczarek.

Since the late 1990s, on the initiative of cultural animator Marcel Szytenchelm, Piotrkowska Street has been decorated with open-air bronze sculptures commemorating famous personalities associated with the city. They form the so-called Gallery of Great People of Łódź, and include Tuwim's Bench, Rubinstein's Piano, Reymont's Chest and the Creators of Industrial Łódź.

The Stars Avenue was modeled on Hollywood's Walk of Fame and stretches from August 6th Street and the Rubinstein Passage, and is dedicated to actors, directors, set designers and cameramen (Łódź is home to the famous film school). Its originator was director Jan Machulski. There are stars of, among others, Andrzej Seweryn (his star was built in in 1998 as the first one), Agnieszka Holland, Krzysztof Kieślowski and Roman Polański.

Walking down Piotrkowska Street, it is worth visiting several museums. The Museum of the Sewer “Tube” is a perfectly preserved oval rainwater tank under the Freedom Square – a part of the sewerage system designed by British engineer, William Lindley. The exhibition presents objects, documents and archival photos documenting the formation of the Łódź sewage and water supply systems in the 1920s and 1930s. The Museum of Archaeology and Ethnography (Plac Wolności 14) collects exhibits related to folk culture and ethnography of the Łódź land amongst other things.

In the Museum of Pharmacy (Plan Wolności 2), the interior of a pharmacy from the late nineteenth and early twentieth century was recreated along with the recipe, herbs room, library and lounge. It includes antique apothecary furniture, instruments for the production of medicines and vessels for storing them, as well as pharmacy and laboratory scales, cast-iron and porcelain mortars.

The Central Museum of Textiles (Piotrkowska Street 282) in the White Factory of Ludwik Geyer presents raw materials, textile techniques and technologies and finished fabrics, and much more. It also organises the International Triennial of Tapestry – the oldest and the largest exhibition of contemporary artistic textile in the world.

Piotrkowska Street is not a pedestrian precinct, but a street with limited traffic. The most pleasant way to travel down it is in a rickshaw. Rickshaws appeared on Pietryna in 1999. They are not only a tourist attraction, but also serve a practical role as a means of public transport. Provided with roofs and wind covers, they ride along Piotrkowska Street throughout the year. In 2015, Piotrkowska Street was declared a historical monument.