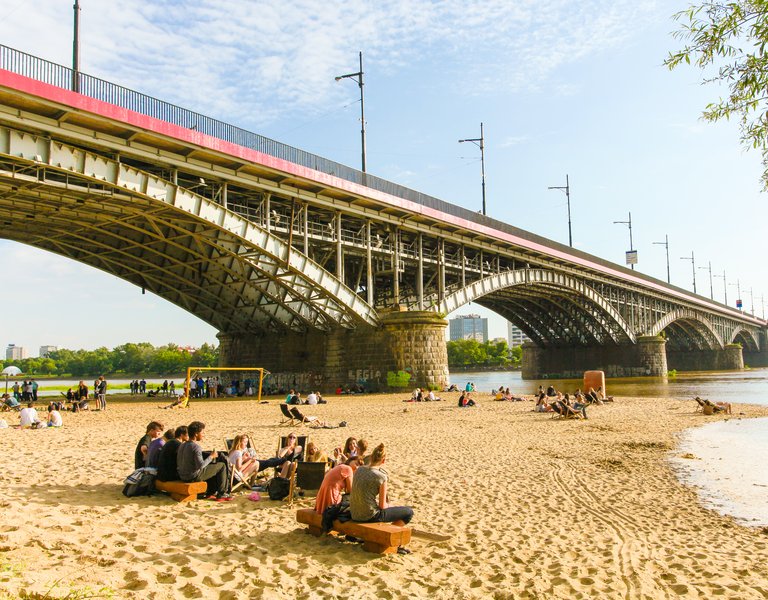 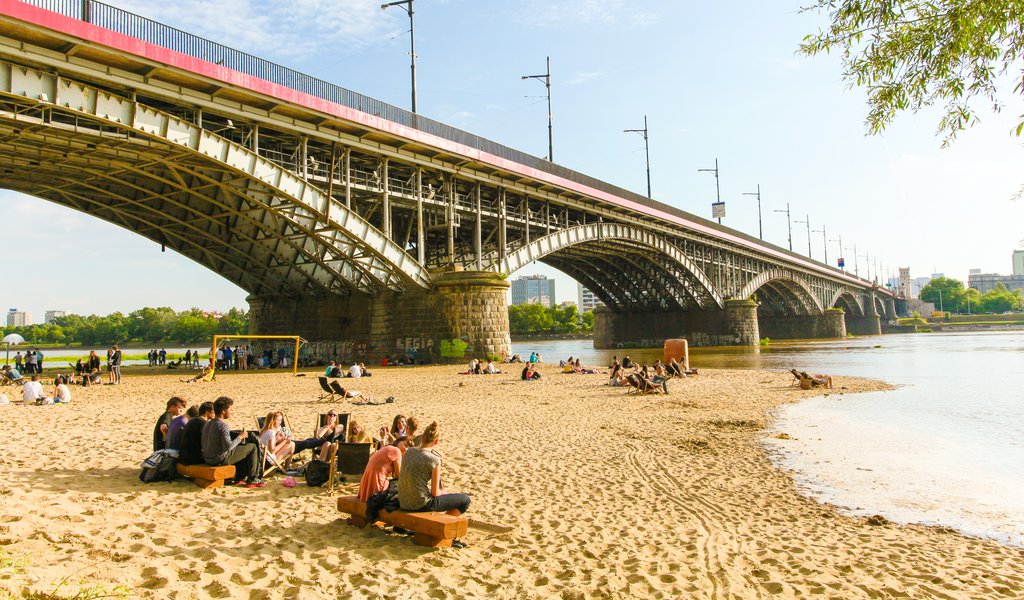 Residents of big cities are returning to the riverside. In the spring and summer season, cultural and social life is shifting to the waterfronts.

Only a few years ago, Polish tourists travelling abroad would have been taken aback at the sight of a city beach, such as those seen in Berlin. Today, sandy riversides in Warsaw, Poznan, Torun and Krakow are dotted with deckchairs. For many years, flood banks have crammed up waterside boulevards. This is now changing, with residents finally returning to the riverside.

After the war, the capital turned its back on the river. The Vistula’s regulated left bank was covered with concrete embankments, and the right bank was left to overgrow with wicker and became a deserted place, frequented only by the homeless and anglers who would fish there in spite of a ban. Those taking a stroll on the left bank would tread on sturdy asphalt and the only place to sit was on the hard steps leading to the water. The situation started to change in the early 21st century. Barges moored to the left bank became a familiar sight, with restaurants offering a view of the river. Alternative clubs popping up in the Powisle district began inching closer towards the waterside. Despite attracting enthusiastic crowds they had to make way for luxury apartment blocks a few years ago. Social life then moved to the immediate waterfront, taking shape in new, often outdoor, cafés such as La Playa and Temat Rzeka where regulars lounge in deckchairs while sipping their drinks, playing scrabble and watching water trams cruise by. 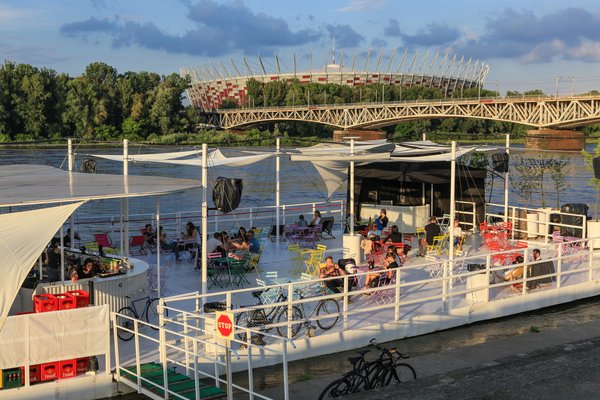 Reclaiming the areas adjoining the Vistula banks has also received the backing of city authorities. “The plan to expand the Vistula Embankments is a huge long-term project. But we’d like to have its first stage ready in mid-2015 and commission the section from Boleść Street set back from the Old Town to the Śląsko-Dąbrowski Bridge,” Bartosz Milczarczyk, a press spokesman for the Warsaw City Hall, tells Polska.pl. He adds that the project’s next stage will involve renovating the section from the Śląsko-Dąbrowski Bridge to the Świętokrzyski Bridge, planned for completion in late 2016. “We’re aware residents are increasingly spending their leisure time by the riverside, that’s why we’re pushing on with the works. So far we’ve built the Vistula Bicycle Trail, a 30km pedestrian and bike path leading along the river from Lomianki in the north to Konstancin in the south. We want to turn Warsaw towards the Vistula and its bank, which is among Europe’s most beautiful,” adds the spokesman.

Warsaw is edging closer to the Vistula, but not without occasional setbacks. These have included the width reduction of the Wisłostrada Route, which runs along the embankments. City authorities have urged patience, promising that the end-result will be well worth the wait.

The river is making a comeback in Poznan, too. “For years, areas along the Warta River were desolate. We couldn’t develop them because of legal reasons—city authorities were afraid of the flood risk,” Paweł Marciniak, a spokesman for the Poznan City Hall, explains in an interview with Polska.pl. 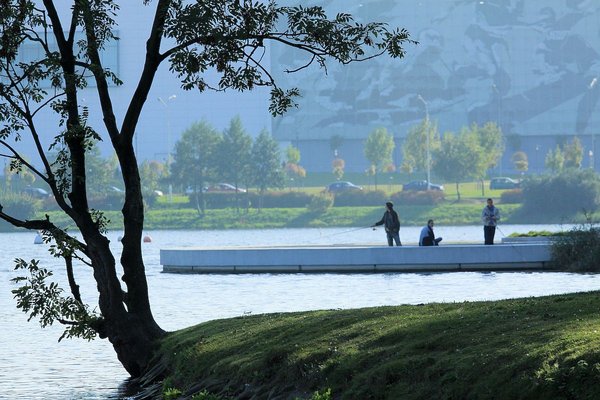 Art circles also played a role in helping open up the riverside to Poznan residents. KotenterART, a mobile centre of culture and art, was set up on the waterfront by artist couple Ewa and Zbigniew Łowżył. Faced with a lack of space for artistic endeavours, they started the project as a means to create additional creative space in the form of containers. Since 2008, containers have been installed throughout Poznan, predominantly on the Warta riverbank.

A few years ago local councillors started to push for riverside areas to be restored. They decided to stay true to the Warta theme. This is why although Poznan, unlike Gorzow Wielkopolski, does not have embankments, the city has nevertheless been able to offer a beach in Chwaliszewo for three consecutive years. “And three or four new ones will come this year. They will open in June. Right now we’re about to complete a park leading to the Chwaliszewo beach and to KontenerART from the Old Town. We’re also planning to launch a river tram, or a small ship that would stop over at city beaches and at the harbour we’re building near Poznan Cathedral for those who cruise the Warta. They will surely want to moor at such a distinguished location,” adds Mr Marciniak.

The Vistula riverside vista of Torun is considered to be among Poland’s most beautiful. In a 2007 poll by the Rzeczpospolita daily titled “Seven wonders of Poland” it was second only to the Wieliczka salt mine. Old Town buildings with a Teutonic castle that descend onto embankments have long been Torun’s cultural and social heart. Once a popular place to welcome the spring sunshine, embankment stairs are now one of the town’s most attractive sites. You can take a stroll here, relax in an outdoor bar and watch the river. 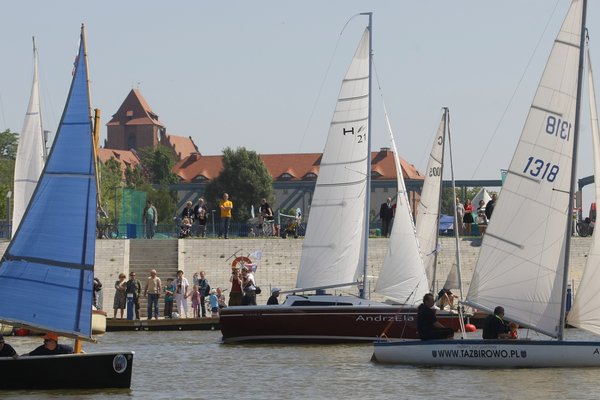 That is why the Torun municipality is investing in the riverside. “Last year, we completed the overhaul of the harbour owned by the Academic Sports Association of the Nicolaus Copernicus University. We converted it into a small marina for the residents and tourists alike. An international architectural competition for the urban and architectural design of Philadelphia Boulevard is due to be decided by the end of year. We want the development plan proposal to be consistent and carefully tailored to the needs of the residents who expressed their views in public consultations,” says Aleksandra Iżycka, the municipality spokeswoman. She adds that back in 2014 the town built a leisure area there for families with kids—a mini beach filled with sand. “You can recline in a deck chair here and watch the water or the kids playing in a new playground,” adds the spokeswoman.

But that is not all. In late 2014, a tower with 24 breeding boxes for swifts was erected at Philadelphia Boulevard. It is hoped the birds will help the town combat insects, especially mosquitoes,a major source of discomfort in the summer. Ornithologists from the ALAUDA Nature Society, who proposed the idea to the authorities, claim that a single bird feeds on around 500 insects a day, that figure rising into the thousands during the breeding season. Swifts, which leave Torun in winter, come back to the Vistula banks in April and May.