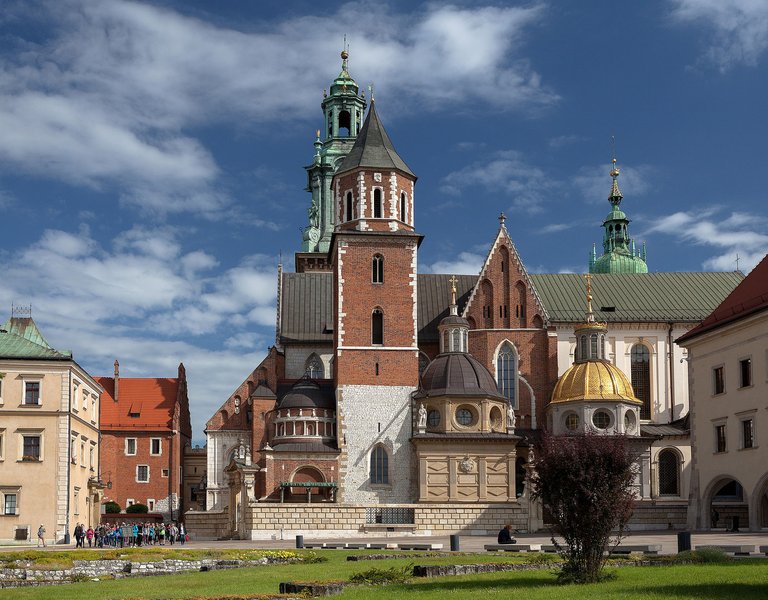 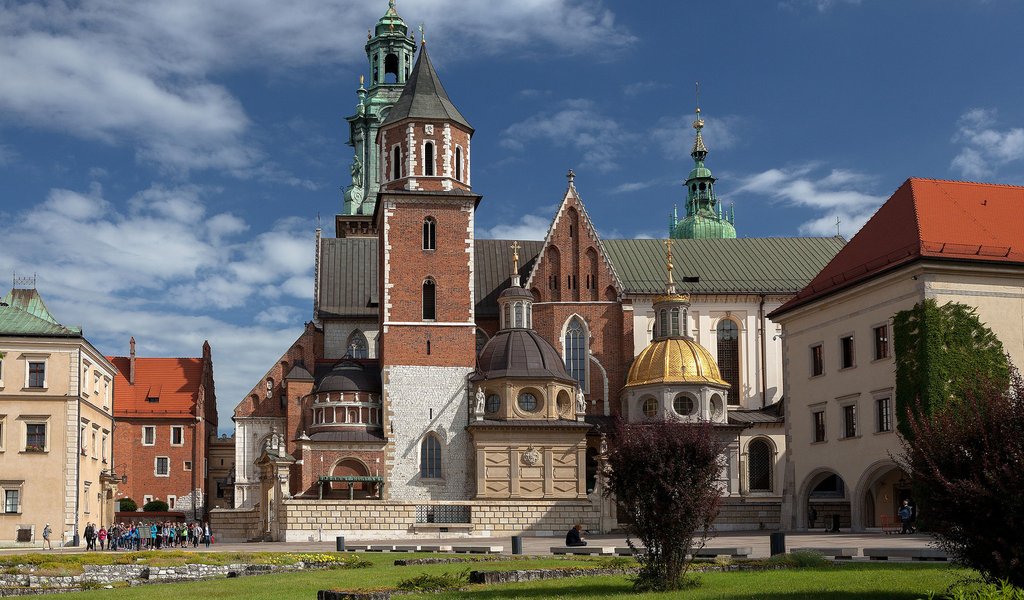 The Wawel Cathedral in Krakow is Poland’s most important sanctuary. Starting with Władysław the Short, it hosted the coronation of almost all Polish kings and it is the burial place of many distinguished Poles.

The first church – pre-Romanesque rotunda – was erected on Wawel Hill after the establishment of the diocese in Krakow in l000 AD. Little is known about its appearance. The subsequent building, a Romanesque building from the turn of the 11th and 12th century, was a three-aisled basilica of limestone and sandstone with two towers. Its fragments, including St. Leonard's Crypt and lower part of the south tower, are still intact today.

The Krakow cathedral became the centre of worship for Saint Stanislaus, Bishop of Krakow canonised in 1253 and later patron of Poland who died a martyr in 1079 by order of King Bolesław the Bold. Pilgrims from both Poland and adjacent countries would visit his grave. The cult of this saint began to be linked with the idea of unification of the Kingdom of Poland fragmented into provinces. On 20 January 1320, Władysław the Short – the ruler who would unite the Polish lands – was crowned king next to his relic. Since then, all kings except for Stanisław Leszczyński and Stanisław August Poniatowski were crowned in it. Also other important state ceremonies, such as weddings, baptisms and royal funerals, took place in front of the main altar. The first king laid to rest at the Wawel was Władysław the Short. Initially, kings were buried in the burial chambers beneath the floor (many of the coffins and sarcophagi are masterpieces of casting art). Starting from with Casimir Jagiellon, rulers were buried in separate chapels built on to the temple. 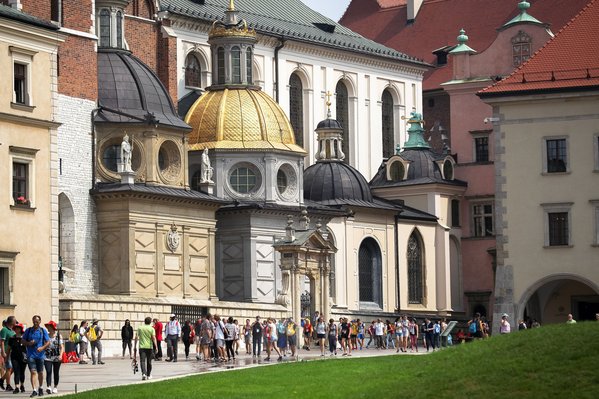 The Romanesque cathedral, weakened by time and a fire in 1305, could no longer serve as the main church of the diocese of Krakow. New Gothic three-aisle basilica with a transept (preserved almost unchanged until today) was built in stages between 1320 and 1364. Already during its construction , bishops and magnates founded first chapels by its external walls. The process of their foundation lasted throughout the fourteenth and fifteenth century. Noteworthy is the oldest Holy Cross Chapel with painted ornaments made by Russian painters, with King Casimir Jagiellon’s magnificent tombstone by Veit Stoss – a masterpiece of late Gothic art.

The 16th century brought further changes to the interior of the cathedral. Some of the medieval altars, including the main altar, were replaced with new Renaissance ones. A number of tombstones for kings and bishops and epitaphs were also created. The Renaissance style was initiated in the temple by Italian sculptor, Francesco Fiorentino, the mastermind behind the tombstone of King John Albert which took the form of an ancient triumphal arch. Renaissance and manneristic equipment was also the work of other prominent artists (who had) settled in Krakow, such as Bartolomeo Berrecci, Giovanni Maria Padovano, Santi Gucci and Jan Michałowicz of Urzędów. One of the greatest works of the Renaissance, not only in Poland but also in the whole of Central Europe, is Sigismund's Chapel founded by King Sigismund I the Old, designed by Bartolomeo Berrecci and made by Italian artists between 1519 and 1533, with the tombstones of the founder, his children Sigismund II Augustus and Anna Jagiellonka as well as a silver altar.

The Wawel cathedral has nine bells. Four smaller bells are hang from the Tower of Silver Bells, and five larger ones – on the Sigismund Tower. The most famous of them is Sigismund. The founder of the bronze colossus was King Sigismund I the Old, and it was cast in 1520 in Krakow by the bell-founder from Nuremberg, Hans Behem. The residents of Krakow heard the wonderful sound of Sigismund for the first time on 13 July 1521 and since then it has been beating in the most important church, on national holidays. Over the centuries, it has become one of the most important national symbols for Poles.

Inside the richly ornamented body, there is the Gothic clapper on a thick cowhide belt consisting of an ear, a core and a ball which hits the flange, i.e. the thickest place of the body. From its first ringing to this day the bell has been moved by hand by a team of bell-ringers, and this honourable function usually passes from father to son. Ringing the bell is treated as a liturgical service. It requires enormous effort and skill. 12 bell-ringers are needed to ensure the proper swing of the over 12-ton colossus.

In the seventeenth and eighteenth century the cathedral changed its décor again. Generous foundations by kings, bishops and magnates allowed replacing equipment from earlier periods with new altars, tombstones, stalls and paintings. The interior, organised, unified and subject to the principles of symmetry, gained a baroque character. Black and pink marble became the characteristic material for the new era. The baroque interior of the cathedral was mainly the work of Italian artists, such as Giovanni Trevano, Giovanni Battista Gisleni and Francesco Placidi, or those trained in Italy, such as Kacper Bażanka.

After Poland lost its independence at the end of the 18th century, the cathedral became impoverished materially, but its status as a national sanctuary grew. In the nineteenth century it became a destination of patriotic pilgrimage and a place of celebrations commemorating important events in Polish history, such as the relief of Vienna or the Battle of Grunwald. For Poles living on the annexed territories it was a symbol of Poland’s former glory. Burying national heroes who had fought Polish independence – such as Tadeusz Kościuszko and Józef Poniatowski, as well as the romantic poet and spiritual leader of the nation, Adam Mickiewicz, in the vaults was of special significance. These burials elevated the cathedral to the status of the national pantheon. Already in the 20th century, the remains of another poet-bard of the days of romanticism, Juliusz Słowacki, were placed in the vault, as was the first Marshal of Poland, Józef Piłsudski, and the commander-in-chief of the Polish Armed Forces and Prime Minister of the Government in Exile during the Second World War, Władysław Sikorski. In 2010 President Lech Kaczynski and his wife Maria, who died in the Smoleńsk plane crash, were buried in the vestibule of the Cathedral's Pilsudski crypt.

The present appearance of the cathedral is the result of the great restoration of 1895-1910. Historical stratifications of successive eras of art were respected, however, part of the baroque décor was removed. New works of art were added, some of which are outstanding examples of Art Nouveau, e.g. stained glass windows and murals in the Szafraniec Chapel and the vault by Józef Mehoffer. The twentieth century was a period of continuous conservation of the cathedral. Before 2000, all façades and some of the chapels were renovated for the celebration of the millennium of the diocese of Krakow and the Great Jubilee of Christianity.

John Paul II had a special connection to Wawel cathedral. On 2 November 1946, still as priest Karol Wojtyła, he celebrated his first mass here, next to the neo-Romanesque altar in St. Leonard's Crypt. On 28 September 1958 he was consecrated bishop, on 8 March 1964 his archiepiscopal inauguration to the cathedral took place, and 9 July 1967 marked his cardinal inauguration. After the election as Pope John Paul II, he described the temple in a letter to the cathedral chapter using the following words: “The heart of Poland beats there and there beats my heart.” The Pope visited the cathedral during his apostolic visits in 1979, 1983, 1987, 1991, 1997, 1999 and 2002. In 2008, his monument was placed in front of the entrance.

In 1906 the Diocesan Museum was created next to the cathedral and transformed by Cardinal Karol Wojtyła into the Cathedral Museum in the 1970s. It exhibits regalia and religious artefacts of exceptional artistic and historical value: handicraft, fabrics, paintings and sculptures gifted by kings, bishops and magnates, which have been kept in the cathedral vault since the eleventh century. The exhibits include the spear of St. Maurice presented in 1000 AD during the Congress of Gniezno to Bolesław the Brave by Emperor Otto III (the first historic insignia of power used by the Polish rulers from the Piast dynasty), as well as a crown, sceptre and orb of Casimir Jagiellon from 1492, a velvety coronation coat of the last king of Poland, Stanisław August Poniatowski, from the second half of the eighteenth century, fourteenth-century rationale of bishops of Krakow – a rare element of liturgical vestments given with a special papal decree (John Paul II granted it during the liturgy in the cathedral), made of precious fabrics, decorated with elaborate embroidery as well as precious and semi-precious stones, mitres and vestments, in addition to reliquaries, chalices and monstrance.

The Papal Hall presents John Paul II memorabilia, including a cassock, biretta, calotte and belt, mitre – a gift from Italian goldsmiths, a chair used during his last pilgrimage to Poland and exotic souvenirs from apostolic journeys.