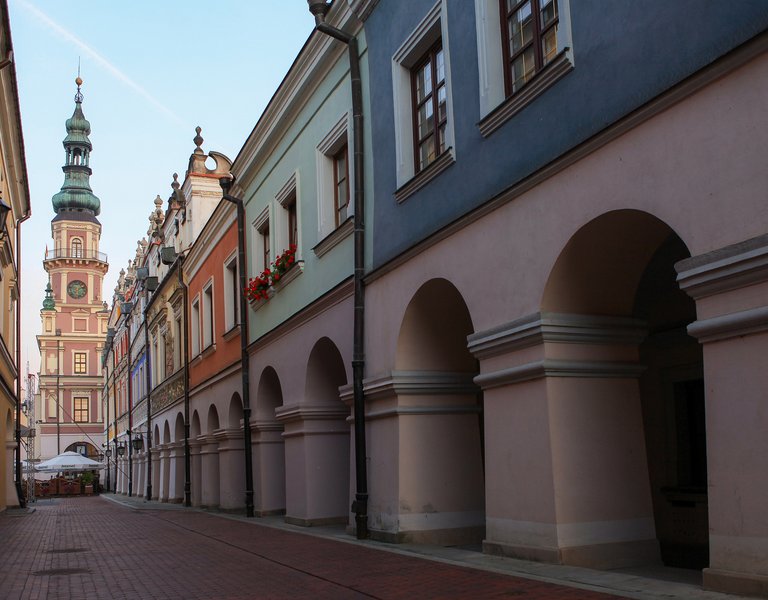 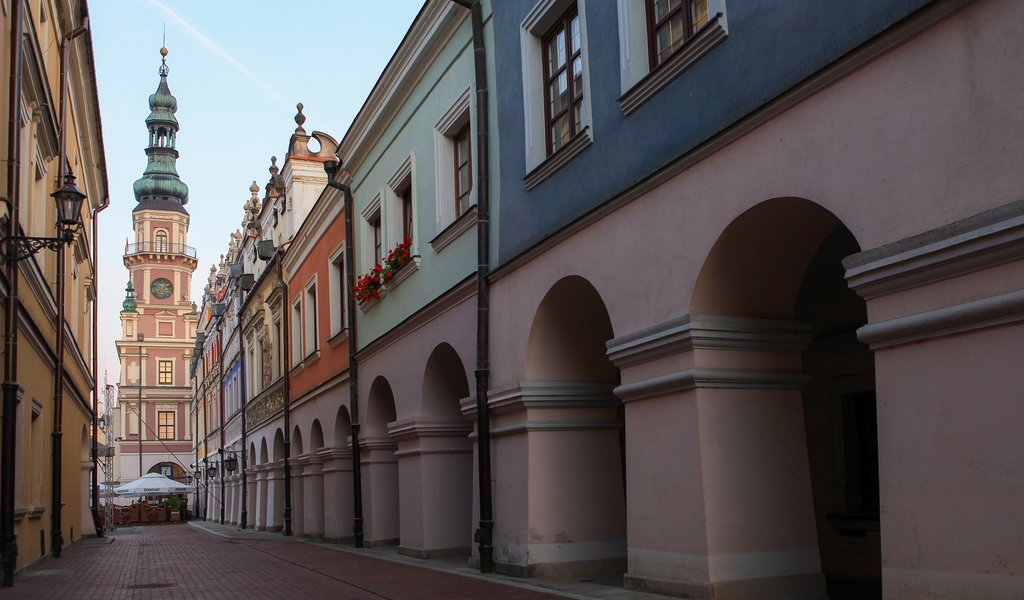 Zamosc is a Renaissance town with a well-preserved urban plan, unique in Europe.

Zamosc lies in a wide valley of the Labunka river amid gently rolling hills. Settled in 1580 by Jan Zamoyski, the Great Hetman of the Crown, it became a fortified residence of the Zamoyski Family Entail (established in 1589). Designed as an ideal town, it combined beautiful architecture with the requirements of a commercial and political centre. The Old Town with its three market squares, a checkboard street layout, and many historical buildings has remained almost intact to this day.

Situated along a trade route connecting Wolyn and Lwow with Lublin and Warsaw, Zamosc enjoyed many privileges, such as the right to run warehouses, fairs, and duty-free trade with the rest of Poland. Crafts such as furriery, cloth manufacturing, tanning, shoemaking and trade flourished. Poland’s first manufactures of Morocco leather, cordovans, and carpets were set up in 1585. In less than a century, their number grew to over 200. 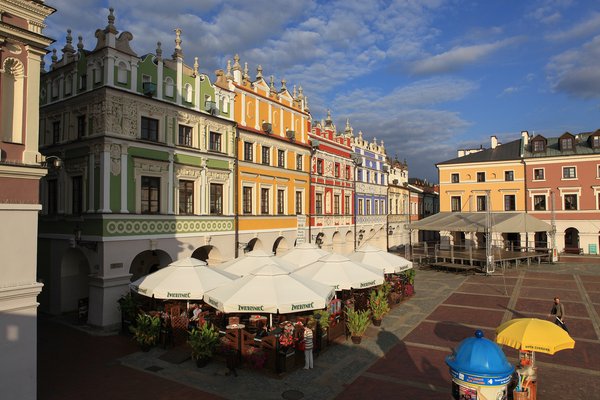 Armenians (in 1585), followed by Jews (in 1586), who formed one of the largest Jewish communities in Poland, and Greeks (in 1589) were granted the right to settle in Zamosc. The town became a unique cultural melting pot.

The town became an academic and cultural centre when the Zamojski Academy, the third university in Poland, and a printing press were founded in 1595. Jan Zamoyski’s famous quote, “republics are as good as the education of their youth,” was written in to the Academy’s founding act.

Zamosc was designed by the Italian architect Bernardo Morando between 1579 and 1600. He built the palace of the town’s founders, the town hall, the Zamojski Academy, the Collegiate Church (now Cathedral), the Synagogue, the arcaded houses around the Great Market Square and the Salt Market Square, as well as the bastion fortifications which form a ring around the town.

The Salt Market Square was used as a marketplace until 1942. In the town’s early years, salt from the Wieliczka Mine was stored there. The square’s eastern and northern frontages are ringed with arcaded houses without attics and face decorations, which were destroyed in the 19th century. Only the Rabbi’s House on the corner is decorated with a beautiful frieze featuring a vine jar motif.

The Water Market Square takes its name from the nearby Zalewa Wielka, or floodplains, which made it difficult to access the town’s fortifications. The square had probably never seen any commercial activity. Some of Zamosc’s most prominent burghers lived there. Today, there is a fountain in the middle of the Water Market Square and the buildings around it are from the turn of the 20th century. 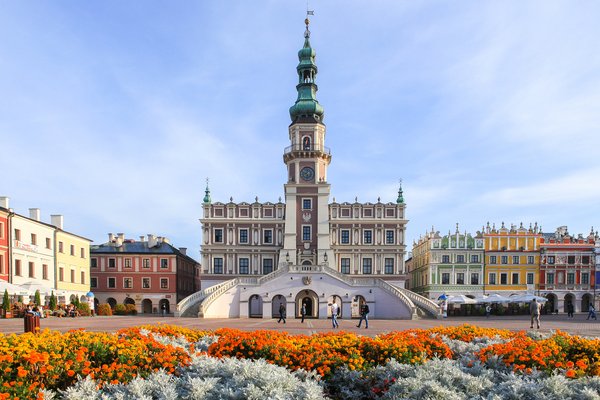 The town’s heart is the Great Market Square, one of Europe’s most splendid 16th century plazas. The two main axes intersect here: the fashionable Grodzka Street which connects Zamoyski Palace with Bastion no. 7, and the commercial Ratuszowa and Moranda Streets which link all three Old Town market squares. The Great Market Square is surrounded on four sides by arcaded houses whose former inhabitants were merchants, Academy professors, and courtiers. The houses all had attics: small decorative walls, balustrades or pinnacles that protected the roofs, now gone. They only remained in the Town Hall and the adjoining Armenian buildings.

The Town Hall, Zamosc’s hallmark, looms large over the Market Square. Its 52 metre-high tower and monumental curved stairway were rebuilt in the second half of the 18th century. In the summer, a bugle is played at noon from the clock tower in three directions only. Legend has it that Jan Zamoyski disliked Krakow and forbade his trumpeters to play in the direction of that city.

The attic-crowned Armenian houses are among the most splendid and best preserved burger houses in Zamosc. The Wilczek House, named after its former owner Jan Wilczek, a town councillor, is located nearest the town hall. The bas-reliefs decorating its corner show the owner’s patron saints: John the Baptist, John the Evangelist, and St. Thomas the Apostle holding three spears (Zamosc’s coat-of-arms), the Immaculate Conception of the Blessed Virgin Mary, as well as a cartouche initialled with the letters JWRZ which stand for Jan Wilczek Councillor Zamosc.

The second building, the Rudomicz House, belonged to Bazyli Rudomicz, a lawyer, physician, writer, professor and rector of the Zamojski Academy. He kept a diary documenting the colourful life of 17th-century Zamosc.

The House Under the Angel is decorated with a bas-relief of Archangel Gabriel. Among the grapevines above, is an image of a dragon, the symbol of evil, and two lions, whose role it is to protect the house against it.

The House Under the Marriage features a bas-relief of a woman and a man on the façade. Legend has it that the house’s owner wanted to get rid of his quarrelsome wife and accused her of witchcraft, for which she was burned at the stake.

The façade of the last of the five Armenian houses, Under the Madonna, is decorated with an image of the Virgin and Child Trampling on a Dragon. Our attention is drawn to richly sculptured lintels on the first-floor windows and to the marks and initials “SS” belonging to Sołtan Sachwelowicz, an Armenian merchant and founder of the house.

In the eastern frontage is the noteworthy house of St. Casimir with stonemasonry decorations – fragments of attics crowning the houses and a sculpture of the saint around the second-floor windows.

At the western frontage stands the Link House with its red brick elevation. It was rebuilt in the baroque style at the end of the 17th century by its owner, Jan Michał Link, an artillery major and architect. He left his architect’s imprint on the frieze below the window featuring armour and weaponry elements. The façade is decorated with the helmeted head of the Roman goddess Minerva and the bust of Hercules in lion’s skin. Legend has it that they were supposed to protect the inhabitants against the ghost of Morando, who haunted them, unhappy about the disruption caused to the market square’s Renaissance harmony.

The Morando House in the southern frontage belonged to Bernardo Morando, the town’s architect and builder of its most important buildings. It was intended as a pattern for other Zamosc houses and it features bas-relief strapwork frieze, chamfered stone over the arcades and a decorative portal.

The magnificent cathedral (formerly a collegiate church) close to the Great Market Square was a votive offering from Jan Zamoyski for his many victories. It also served as a Zamoyski family mausoleum. Successive ordynats would swear to uphold the statute of the ordynacja (Family Entail) there. The collegiate church was built between 1587 and 1598, but work on its decoration was completed as late as 1630. It was rebuilt in the first half of the 19th century in the classicistic style.

The church’s high main nave has a sculptured entablature. Eighty-five oculi were placed between ancones – no two alike. The painting in the baroque main altar shows the patron saint of the Cathedral, Saint Thomas the Apostle kneeling before the Risen Christ. The rococo silver tabernacle on the altarpiece, one of the most precious tabernacles in Poland, was created by goldsmiths from Breslau (Wroclaw).

Four large 17th century canvasses on side walls of the presbytery depict scenes from the patron’s life and his martyr’s death. Szymon Szymonowicz’s gravestone is on a pillar next to the pulpit. He was a humanist, Renaissance poet and one of founders of the Zamojski Academy. An organ for 25 voices founded by Maurycy Zamoyski, the 15th ordynat, is situated above a sculptured choir screen.

The Zamoyski chapel, to the right of the presbytery, is the most interesting of the eight chapels. Jan Zamoyski’s gravestone is placed in its floor, and next to it a tombstone of the 14th Ordynat Tomasz Stanisław Zamoyski. On the chapel wall are portraits of the grey haired Jan Zamoyski and his son Tomasz painted by Wojciech Gerson. The chapel vault is decorated with magnificent baroque stuccos made by Jean Baptiste Falconi in 1635. Metal doors in the floor lead to crypts where ordynats and their family members were buried. The 47-meter high baroque bell tower has three bells named Wawrzyniec, Tomasz and Jan. The last one weighs 4.3 tons and is one of the biggest in Poland.

At the exit from Grodzki Street near the Cathedral is the Zamoyski Palace, rebuilt in the 18th century in the baroque style. A statue of Jan Zamoyski stands in front of the palace, and a former armoury, coach houses and stables are located nearby.

A baroque Franciscan Church, one of the most magnificent 17th century churches in Poland, can be found on Staszica Street. It was founded in 1637 by Tomasz Zamoyski, Hetman of the Zamoyski Family Entail. Much of its splendour was lost during reconstructions. Only a few of its stonemasonry gems – Corinthian pilasters and a baroque portal – have remained intact on its western wall.

The early 17th century synagogue located at Zamenhof Street is one of the most beautiful and best preserved late Renaissance Jewish temples in Poland. A unique stone portal leads to the great prayer hall. The Torah Ark, an ornamental closet containing Torah scrolls, has also remained intact. The walls and vaults of the synagogue are richly decorated with stucco and marbling featuring oculi and mural paintings with inscriptions in Hebrew and the tree of life. An 18th-century mikveh containing a basin for ritual cleansing inside is situated near the synagogue.

Fortifications with gates, some of which are called Lublin, Lwow, Stara and Szczerbska, were built in early 17th century. Thanks to the fortifications, the Zamosc fortress was unconquerable for two successive centuries. Zamosc fought off a siege by Tatar and Cossack armies in 1648, the Swedish army in 1656, and György Rákóczi II’s army in 1657. The painstakingly reconstructed complex of bastions, curtains and moats with water has not changed in appearance since the day it was built by Bernard Morando and Angelo dell’ Aqua.

Zamosc was added to the UNESCO World Heritage List in 1992.