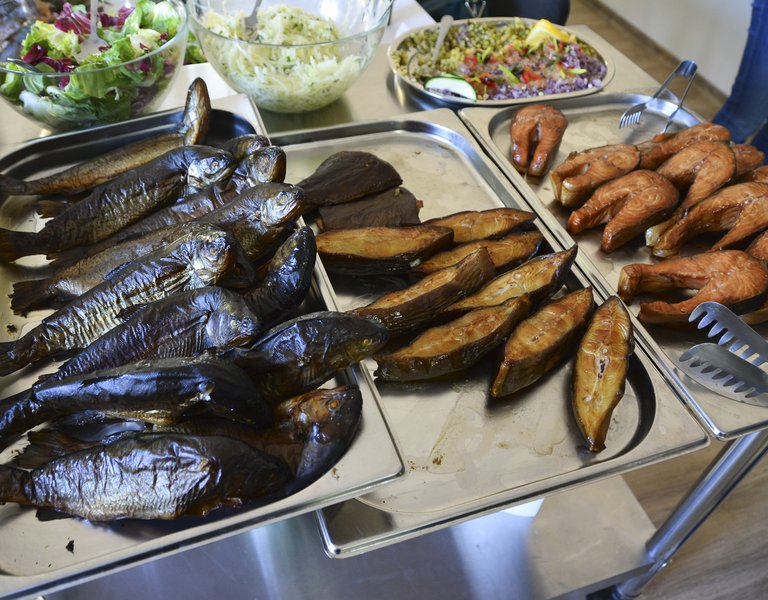 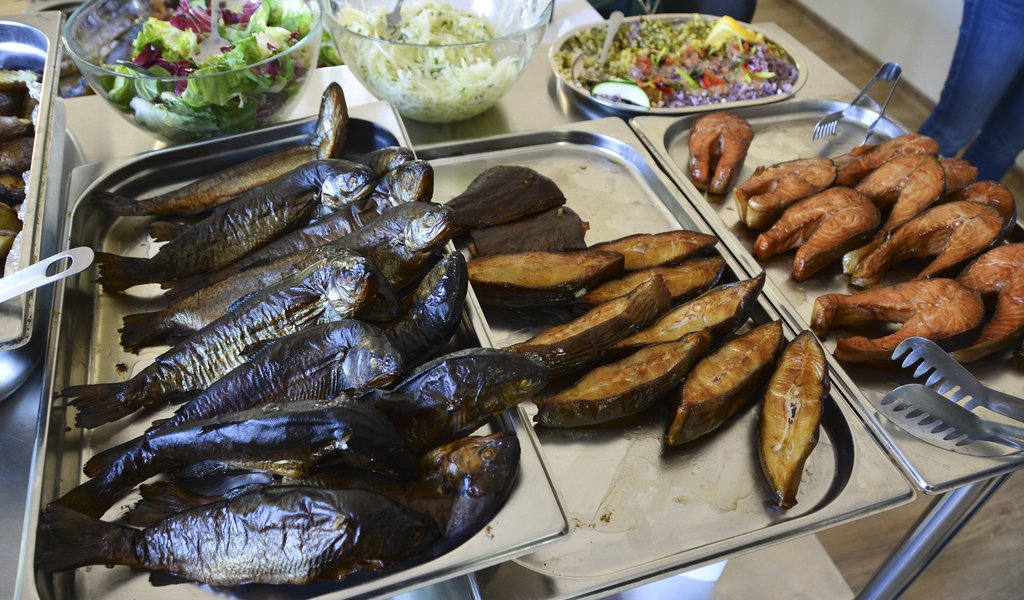 The Slowinski Fishery Trail welcomes you not only to savour fish in various forms on your way from one table to another, but also to make bike trips along a route linking fishing harbours. 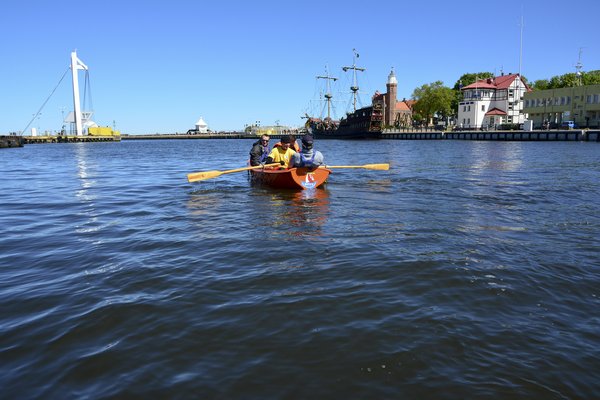 The wild and meandering Slupia River widens into a large estuary, with green reeds almost imperceptibly giving way to concrete wharves, where fishermen moor their boats. Herring gulls are circling over our heads and the boats are starting to sway on the sea waves. We are passing a railway bridge, a shipyard hall, an unused ice factory, then a former granary, a crane, and a lighthouse.

A canoeing trip down the Slupia River leading to the harbour in Ustka is one of the tourist attractions of the Slowinski Fishery Trail in the middle of the Baltic Sea coast. It was created to promote the ethos and traditions of fishermen. “It enables tourists to get some information about Pomeranians’ traditional profession not only in a museum, but also from the fishermen themselves,” said Milena Ugorska-Knapczyk from the Slowinska Fishery Group, which came up with the idea of creating the trail.

However, our trip was all about excellent cuisine, which commands serious respect at the Slowinski Fishery Trail. Obviously, fish are most important. In the words of Marcin Barnowski, a historian and our guide, “the Slupia River is, or at least until recently has been, rich in the Salmonidae.” He continues: “According to historical accounts, the inhabitants of Ustka in the 19th century convinced the Prussian authorities that they needed to invest in the extension of the harbour by ‘bribing’ them with smoked salmon.”

Złota Podkowa is one of the oldest smokehouses in Ustka. Its owner, Henryk Podkowa, used to be a filmmaker, but decided to give up his career to smoke fish. “Thanks to him, after so many years I could once again relish the taste of the best smoked salmon in the world,” wrote the well-known Polish restaurateur Magda Gessler.

The restaurant Syrenka in Ustka also serves delicious smoked salmon, trout, halibut, cod and mackerel. Its owner and chef, Adam Wasylew, reveals some secrets of traditional smoking: “We do everything from A to Z – get fish directly from fishermen, then salt them in brine, smoke and serve them to our guests within less than 24 hours. We prepare hot- and cold-smoked fish using alder wood. It is a craft, our grandfathers and great-grandfathers used to do it the same way. My stuff has nothing to do with fish from a supermarket, prepared on an industrial scale using artificial smoke or soaked in a smoked fish-flavoured marinade. 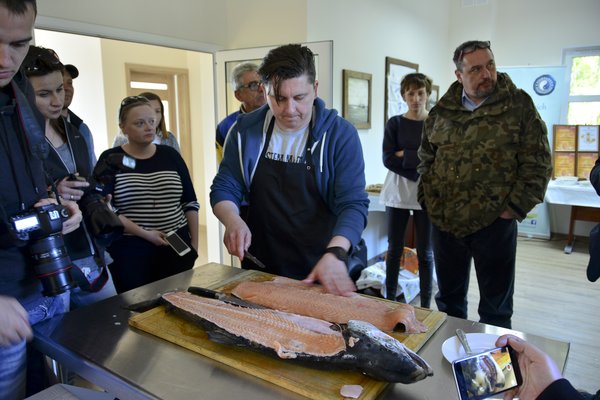 One of the trendiest restaurants in Ustka is Dym na Wodzie run by Rafał Niewiarowski, a Top Chef TV show contestant. His philosophy is quite simple: “We smoke, cut, roast and stew. We use no Maggi sauce or stock cube.” There are such treats on the menu as cod liver foie gras or smoked turbot roe as well as traditional dishes – herring in cream sauce, kefir, rhubarb and young beet soup – all served in a new and elaborate way. The feast ends with a filleting show by Mr Niewiarowski. “To me, the turbot is the king of the Baltic Sea,” he says. However, for many people it will be the herring. Marcin Barnowski says: “I visited many fish markets in Germany and I must say that Europe lags behind Poland, when it comes to ways of preparing herring,” adding, “No one serves them as we do: in oil, in cream, with honey or plums. Yummy!” Kazimiera Świątek from Niestkowo, a small village on the Slupia River, knows everything about herring. She has been running a business called Fishparty Manufaktura with her daughter-in-law for two years. Rollmops in four flavours – with onions, almonds, tomatoes or cranberries – are its speciality. “My husband, who is a fisherman, supplies us with herring,” she explains, “We roll them by hand, a vacuum packing machine is the only one we have. When we do our tasting events in Pomerania, German tourists are eating our herring voraciously!”

In order to taste another herring dish, we get in Marcin Barnowski’s Time Machine (a red 1963 Volkswagen convertible) and slowly head through bright yellow rapeseed fields for Gospoda pod Wesołym Pomorzaninem in Swolowo. It is a medieval oval village with an intact layout, wattle and daub houses as well as a church dating back to the turn of 15th century (a part of the village is occupied by the Museum of the Pomeranian Folk Culture). We get to the inn on a two-horse wagon.

We sit down at a heavy wooden table and are served: cod liver in oil with pickled cucumber and mushrooms, aromatic borscht, sauerkraut and mushroom pasties, crepes with chanterelles, and finally herring sautéed in clarified butter with onions and horseradish. For dessert we try the hostess Tamara Izdebska’s speciality – dark ruby syrup-like chokeberry liqueur. 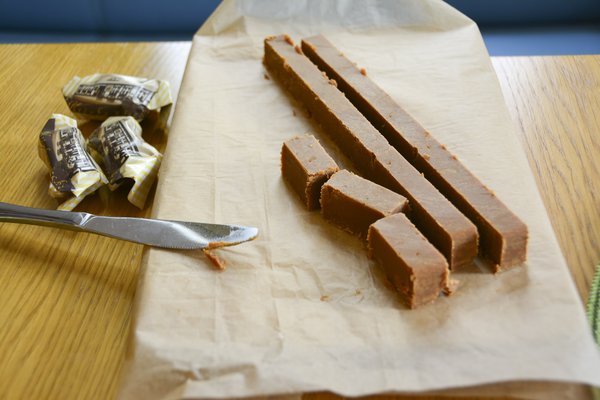 The food trip would not be complete without delicacies prepared by women from the agritourism farms of the Slowiniec Association for the Development of Rural Tourism. Refreshing beverages from young nettle and dandelion are my biggest discovery. And nothing can beat blackcurrant, blueberry, rowanberry, quince and elderflower liqueurs made by Renata Knitter.

Classes in packing Polish fudges called krowki and produced in Ustka will be a sweet culmination. Beata and Adam Jakubiak, the owners of Dom Wakacyjny Mistral, a hotel in Ustka, came up with the idea of producing them three years ago. The candies are prepared at the back of a hotel café. “We make them using natural ingredients: milk, cream, butter and sugar. We cook the mixture for two hours, let it cool for another two, then cut it by hand and pack. Our fudge has become famous, people come here just to taste it. Traditional milk candies are best sellers. Foodies can choose between chocolate, coffee, sesame, coconut and poppy flavoured ones. All of them contain… odourless fish oil with omega-3 fatty acids, as befits seaside candies.” 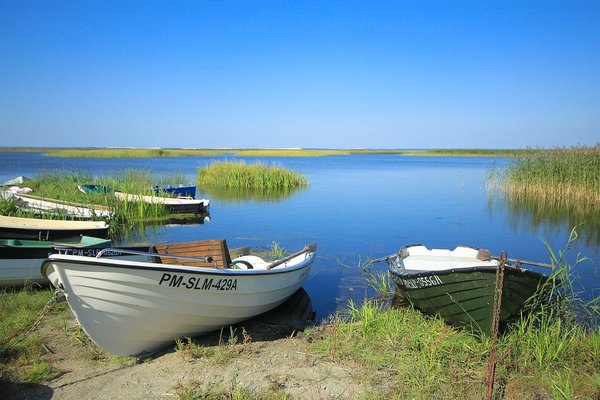 The Slowinski Fishery Trail is part of the Northern Fishery Trail created by nine fishery groups to promote tourist values of fishery and mobilise fishing communities.