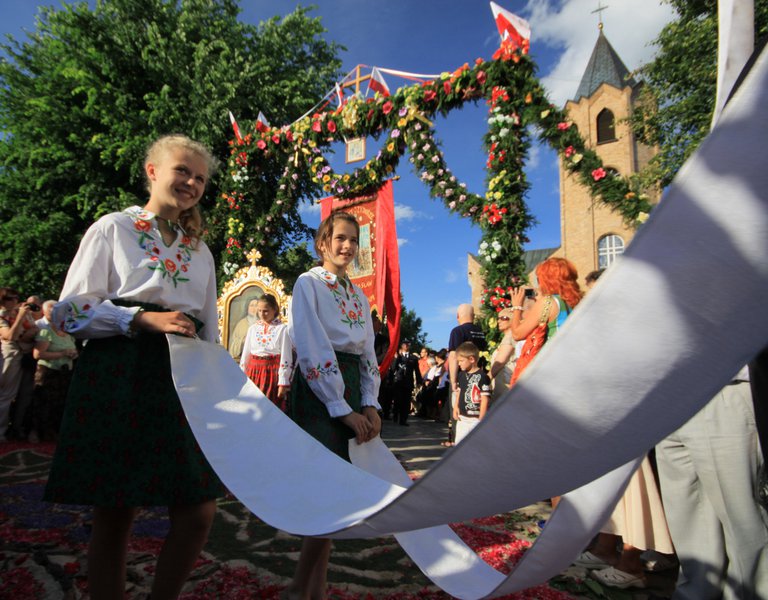 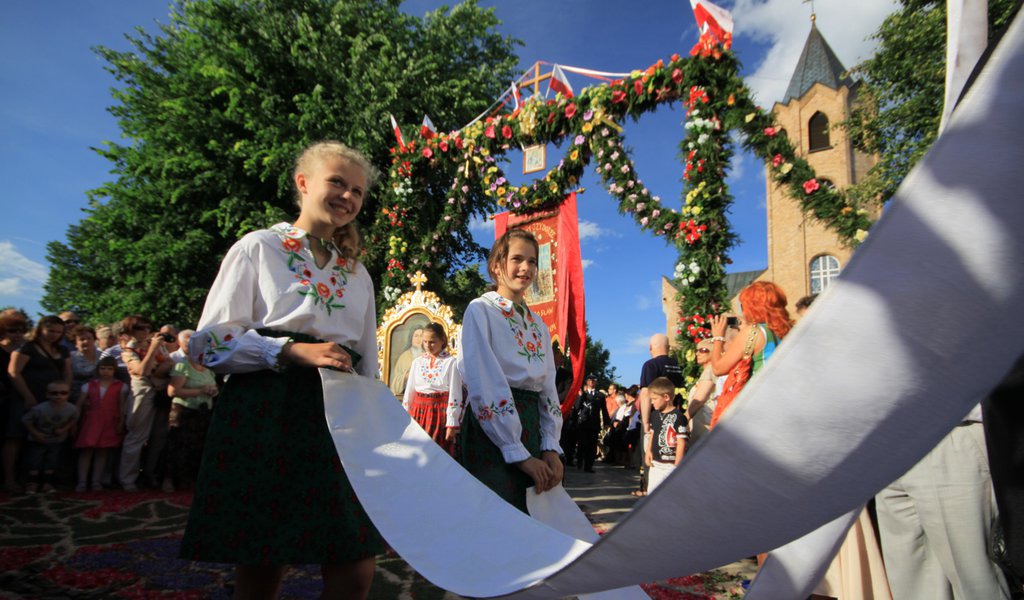 The dance of sacred pictures in Kashubia, floral carpets in Spycimierz and colourful folk dress at a procession in Łowicz are among the sights and sounds to be admired during the holiday of Corpus Christi.

On the eighth Thursday after Easter, a public holiday, richly adorned altars appear around midday at the head of grand processions down the central streets of Poland’s cities and villages. The Solemn Holiday of the Body and Blood of Christ – Corpus Christi – has been celebrated by the Catholic Church in Poland since 1247, and the first mentions of a procession come from records in the Diocese of Kraków from 1320. Associated with the adoration of Christ in the form of the Host, in the 15th century it evolved into a folk holiday – prayers for good weather, abundant harvest and protection from natural disasters. It comes after the Celebration of the Descent of the Holy Spirit, known as Pentecost, during which, in times long past, wreaths of herbs were woven and then blessed in the church. 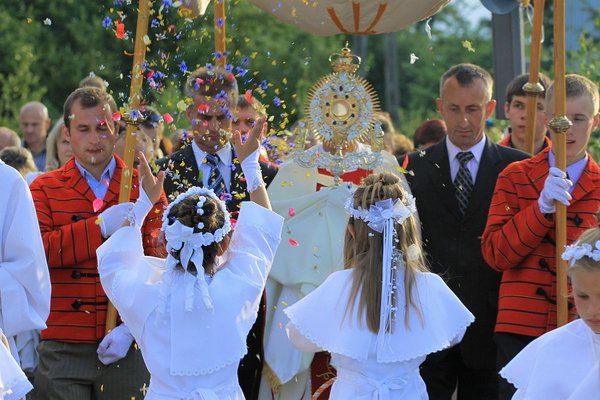 “Both of these holidays are heralds of the summer, and include elements which stem from pre-Christian traditions,” says Robert Piotrowski, ethnologist and director of the Ethnography Department of the Museum of the Mazovian Countryside in Sierpc. “They also made excellent use of the symbolism of pagan holidays, which were celebrations of the spring rebirth of the whole world. The four altars in the Corpus Christi procession symbolize the four gospels, four elements and four sides of the earth, and the processions wind around the altars in the shape of a circle or a square; these figures symbolize a perfect creation, in which nothing can be changed or improved,” the ethnologist adds. In Mazovia, Podlasie and many other regions of Poland the tradition continues of decorating the route of the procession with green branches and cut calamus shoots, filling the air with the beautiful aroma of freshness while also warding off evil spirits. The windows of houses display crosses, candles and sacred pictures.

The essence of these two holidays can be experienced during day-long thematic exhibitions at the Museum of the Mazovian Countryside, which consists of an open-air museum composed of cottages. One of the cottages will be decorated in the traditional manner befitting each holiday. The one dedicated to Pentecost will display wreaths made of herbs with explanations provided to help understand their symbolism, while sacred pictures in the cottage dedicated to Corpus Christi will include branches that residents of some regions gather to this day along the path of the procession to stick inside the frames. “Farmers also place them along the edges of their fields, to ensure a good harvest, and above the doors of their houses to protect them from fire and other disasters,” adds Robert Piotrowski.

Carpets in Spycimierz and a blaze of colour in Łowicz

The largest number of spectators traditionally gathers at the Corpus Christi celebrations in the Łódź region. Every year, thousands of tourists flock to the village of Spycimierz with its 400 inhabitants, 75 km north-west of Łódź. They are drawn by the carpets of flowers which the people of Spycimierz use to decorate the Corpus Christi procession route in observance of a 200-year-old tradition. Visitors will be able to view floral depictions of Bible scenes accompanied by geometric and floral images along a two-kilometre stretch of road, which are first prepared using sand that is then filled with leaves, grass and flowers gathered for days. The carpets are so splendid that local authorities decided to establish a Corpus Christi Trail to attract tourists throughout the entire year. 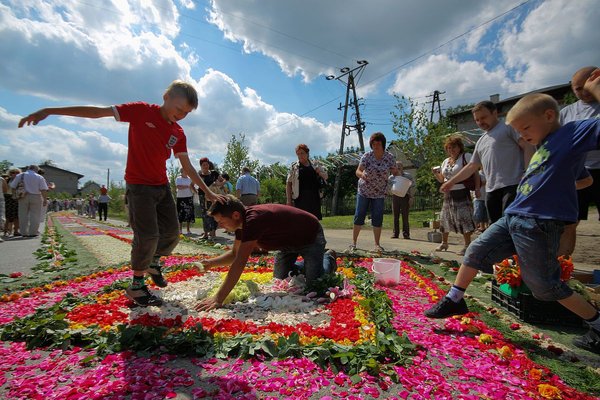 The Corpus Christi procession in Łowicz is an equally popular attraction. It is one of few opportunities to see traditional Łowicz folk costumes being worn, featuring flamboyant colours not found in other regions. The sight of beautifully embroidered rainbow clothes combined with parish flags and living rosaries parading along a path covered in rose petals draws tourists from around the world.

"The Łowicz procession is such a marvel that it began drawing tourists during the inter-war period, when the Łowicz folk dress style that survives to this day was established. Earlier, both the women’s and men’s dress worn by residents of Łowicz-area villages was dominated by orange, which has been replaced in women’s dress by colder hues – blues, greens, purples, sometimes pink,” says Magdalena Bartosiewicz, ethnologist and curator of the Museum in Łowicz, to Polska.pl. She adds that the orange which makes the male Łowicz dress similar in appearance to the uniform of the Papal Guard has nothing in common with it. “In the 1920s, the Łowicz folk dress was enriched by the addition of embroidery – the men on their shirts, cuffs and collars as well as hats, while the women on the bodice of their frocks, aprons, collars, shoulders and cuffs,” adds curator Bartosiewicz. 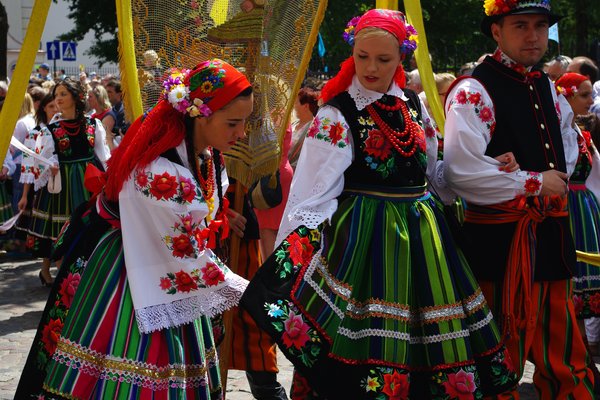 The procession, which leaves the Łowicz Cathedral following the 10:30 Mass, is led by residents of Łowicz and the surrounding villages, and people of all generations sport the traditional folk costumes whose prices begin at PLN 1,500. A particularly numerous group is that of 9-year-olds, who will take Holy Communion for the first time this year. Łowicz and its surrounding region is one of few places in Poland where white surplices and dresses have failed to supplant folk traditions.  The linen shirts and colourful decorations from wool and linen continue to be made according to the traditional tailoring and embroidery designs from the region. They can sometimes be purchased at special booths where folk art from the region is also on display. There are fragments of Łowicz "kodra" with floral themes as well as images of joyful village scenes, which are hung on ceiling beams, over entrance doors or on walls between windows, coupled with other beautiful folk creations.

Bamberka hats and the dance of the pictures

Lovers of folk costumes also gather in Poznań, where in places like the Jeżyce borough they can observe members of processions in folk clothing and characteristic Bamberka coifs on the heads of descendants of settlers from the German city of Bamberg. It is believed that one in four Poznań residents is of Bambergian heritage, with ancestors from among those invited to settle around Poznań at the beginning of the 18th century by local authorities seeking to repopulate villages which had been emptied by epidemics and war. In spite of the heat that often accompanies the Corpus Christi procession, these Bamberkas put on warm costumes composed of a dress, bodice and broad pants with tulle ornaments. Yet the coifs, also called ‘cornets’, are the most spectacular element – they reach a length of around 23 cm, and are made of cloth, wire and artificial flowers, bulbs, ribbons and tissue paper, with copious bows adorning the rear.

Those interested in folk traditions also enjoy attending the Corpus Christi procession in Kalwaria Wejherowska, near Gdańsk, where for over 350 years the locals have cultivated the tradition of the bowing feretory – two-sided sacral images in decorative framing. The "dance" developed by Kashubians consists of a series of gestures performed by those carrying the images in praise of God. In full dress, they remove the picture from the frame and begin to wave it around. The most important movements, however, are the sign of the cross and bowing of the picture, which resemble dances. This is one of the world’s most unique and beautiful ways of honouring the Lord. Not only is the bow a means of showing praise to the holy place, but also to other groups of pilgrims from Kashubia.

Other interesting processions are held in Małopolska and Podlasie, where folk traditions are still practiced. The most splendorous of them in Kraków is the procession from the Wawel Cathedral to the Mariacki Church, with the participation of members of parishes from the city as well as surrounding villages and towns in folk costumes, carrying flags and feretories, authorities of Catholic universities and guild members. In times gone by, the procession hosted kings and their royal courts. 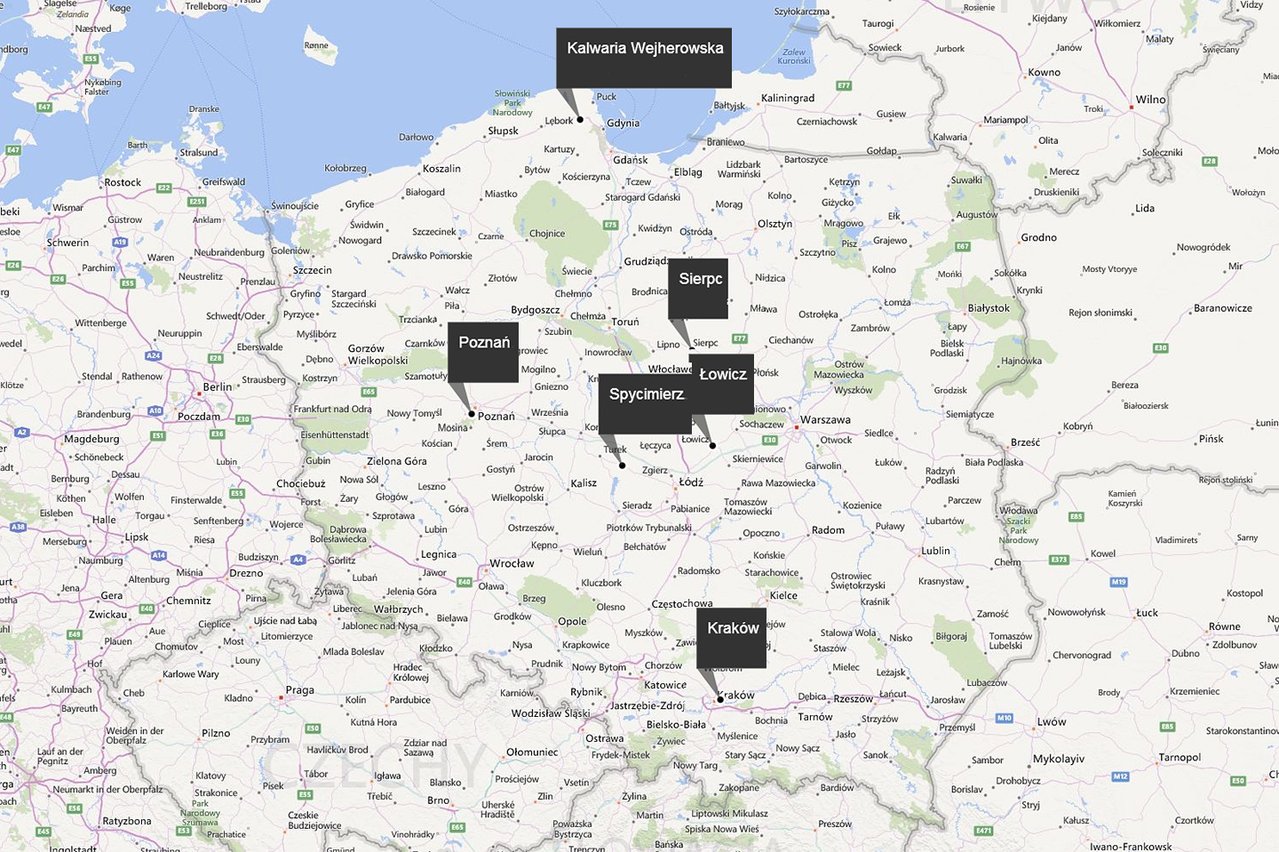