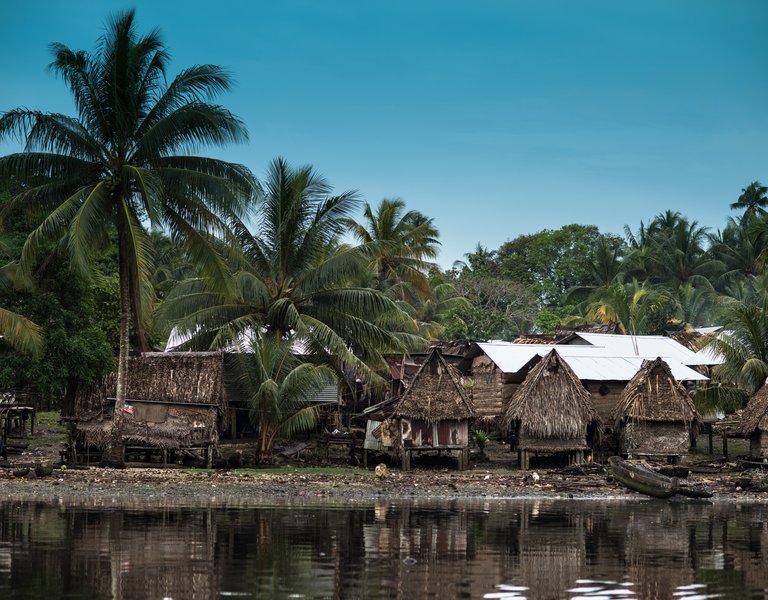 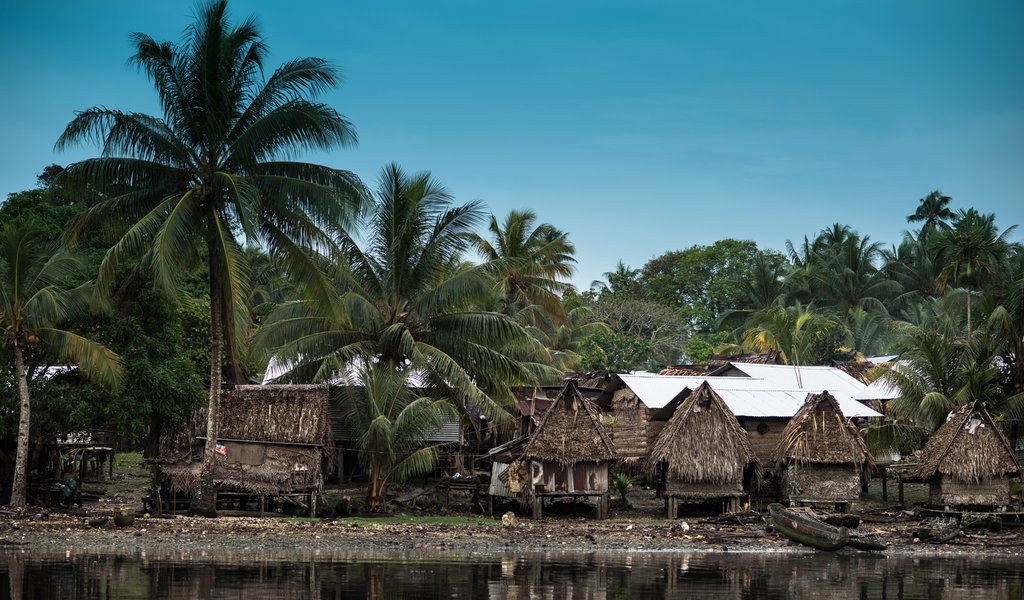 Following in the footsteps of Bronisław Malinowski

100 years after the world-famous anthropologist Bronisław Malinowski, she settled among Trobrianders and followed their customs under the nickname Kadamwasila. Aleksandra Gumowska tells Polska.pl how the Trobriand Islands have changed since the father of British social anthropology carried out his research there in 1915. Her reflections can also be found in a book called Sex, Betel and Magic.

Karolina Kowalska, Polska.pl: Why did you go to the Trobriand Islands 100 years after  Malinowski? Was it that you wanted to bring his work up to date?

Aleksandra Gumowska: I definitely didn’t want to repeat his work. I would never be able to do that. I’m an anthropologist by education only. Professionally, I’m a journalist. And I wanted to see the mythical Trobriand Islands through the eyes of a journalist, a place which Malinowski described and recorded on black-and-white photos, and whose description gave rise to present-day anthropology. I was curious to know what life was like there today. There might be many anthropological books on this topic but they didn’t give clear answers to my questions.

I wanted to know simple things: how do Trobrianders live today, do they have electricity and gas, what shape are their houses, are they made of stone or thatched? I went there for several days in 2009 and felt like in one of Malinowski’s pictures. The only difference was the colours – huge green trees, sandy thatched roofs, walls made of leaves, streets among sand-coloured houses that turn dark-brown when it rains, and colourful clothes instead of grass skirts. On the one hand, nothing has changed; on the other hand, everything has changed. I wanted to check why. In 2012, I spent over a month in Papua New Guinea. 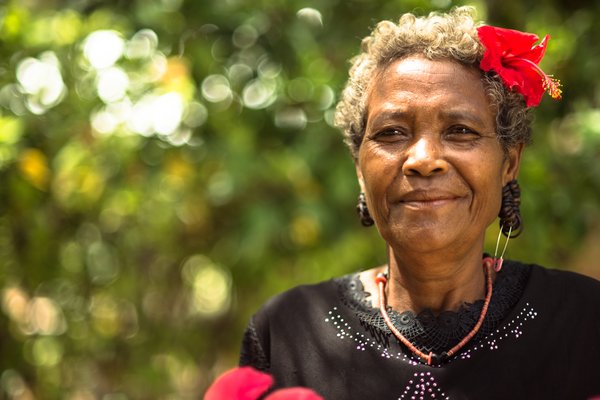 The book is illustrated with contemporary versions of historical pictures. The only person missing among the islanders is you posing as Malinowski.

A family photo was supposed to be the icing on the cake but I was taken ill with malaria and was too weak to even think about taking photos. In addition, I was alone, and Malinowski had his pictures taken by a local merchant, his friend.

The family missing in the picture are relatives of chief Pulayasi who “adopted” you and gave you your island name.

When I came there for the second time, I was named Kadamwasila, Kada for short, by the chief’s wife after her first daughter. The chief’s wife said I would dine with her family, and spend time with them, so I would be just like a family member. This way I joined her clan. This also explains why a pastor’s wife who had never seen me before shared her crab with me as her relative in another village. I was no stranger for her.

I suppose people often ask if you weren’t afraid of going alone into the wild.

Except it’s not wild at all! If I’d been afraid, I probably wouldn’t have gone there. But when I visited the islands for the first time in 2009, I felt quite safe and people would assure me that the Trobriand Islands had a good reputation, that they were safe. Back then I arranged my next longer stay with chief Pulayashi, and his brother kept assuring me: “Remember, next time you come, you’ll have friends”. He made a point of mentioning that once you have friends, you bring them presents.

And so you didn’t come empty-handed.

Apart from betel, a stimulating substance made of chewable pepper leaves I bought right after landing at the airport, I brought T-shirts from the Euro 2012 tournament that was taking place in Poland at the time. The Trobrianders were very grateful for my gift but made it clear that Poland was a country of poor football players. They had satellite TV, so they knew how fast our team was eliminated from the championship. 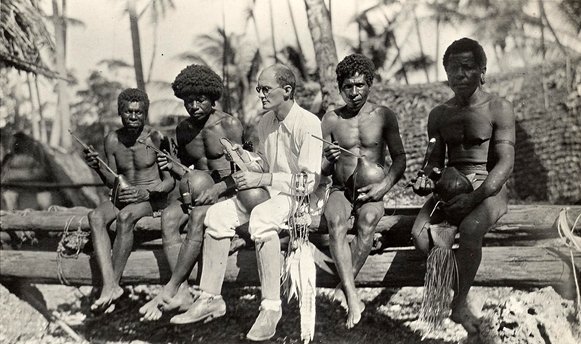 A legendary Polish anthropologist, founder of British social anthropology, was born on 7 April 1884 on Krakow. He introduced a new method of field study based on long-term, comprehensive contacts with the community under examination. An originator of the functional theory, which posits that every cultural phenomenon, even the smallest one, has a social function that’s important to the entire social system.

Graduate of the Faculty of Philosophy of the Jagiellonian University, where in 1908 he obtained his PhD for a thesis titled On the Rule of the Economy of Thinking.

Malinowski also studied at Leipzig University, and from 1910 to 1913 at the London School of Economics, University of London. In 1914-20 he conducted field research in Australia and Oceania. The writer and painter Stanisław Ignacy Witkiewicz (Witkacy) accompanied him on the first leg of his journey.

Altogether, Malinowski spent one and a half years on the Trobriand Islands, with a break in Australia for “summing up the material, receiving his doctorate in natural science, flirting(.), recuperating and matching his false teeth,” according to Aleksandra Gumowska,

The fruits of his journeys include books which form a foundation of modern anthropology: The Sexual Life of Savages in North-Western Melanesia (published in 1929), Argonauts of the Western Pacific (published in 1922), and Coral Gardens and their Magic (published in 1935). In 1927, he was appointed to the first Chair of Anthropology at the University of London. In 1936, he received an honorary degree at Harvard University, and from 1939 onwards worked as professor at Yale University in New Haven, Connecticut.

However, not everybody was so friendly. Chief Kwaiwaya, famous for his black magic, would talk at length about how he would take care of you after your husband’s death. And pastor Rex, who accompanied you to the village of Vakuta, confessed that he would “sometimes visit the village and pick up a girl for company”. And if she informed the police, he would kidnap her and let his mates rape her. It makes your hair curl!

Frankly speaking, chief Kwaiwaya really pissed me off. He seemed to manipulate me, to make me think what a great magician he was. But fairly soon we reached a quiet compromise not to carry on with this issue. I was later told that he had often played this trick before. As for pastor Rex, he would talk about the past using the present tense. I realized that when, after enumerating some cruelties, he said: “But at some point I confided my life to God”. He had been a rapist and thief before he became a pastor. 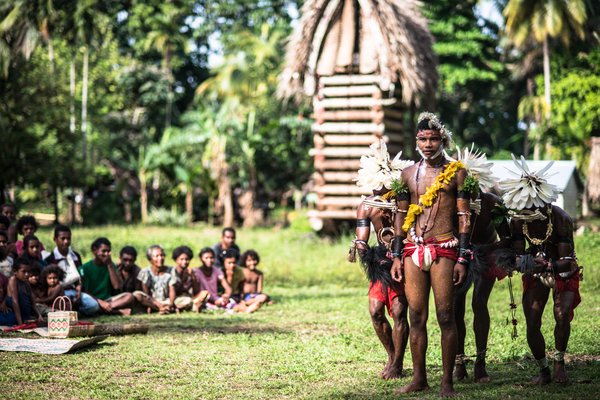 Malinowski was scared of the mulukwausi witches. Strolling at night, he used to sing “kiss me in the ...” to the tune of The Ride of the Valkyries by Wagner. Were you also afraid of witches?

Unlike Malinowski, I only saw mulukwausi in the stories of others, but I must admit that ghosts come into their own in the evening on the Trobriand Islands, where moonless nights are truly pitch-dark. Mulukwausi were supposedly messing around when a boat I was sailing across the Solomon Sea in bumped into the reef and almost capsized. At least that’s what a minister of the United Church in Papua New Guinea told me. He said he saw mulukwausi in action, women who leave their bodies behind somewhere on land, and then attack sailors, overturn ships, devour crews and passengers. The minister studied the way witches behave.

And how about some more tangible threats – poisonous spiders, insects?

There are no tarantulas, or hairy spiders on the Trobriand Islands. The biggest specimens are the size of large spiders that live in Poland. There are some venomous snakes but the most serious threat comes from tiny mosquitos that spread malaria. There are also some big downy millipedes that spit up caustic venom. I once saw a teacher who accidentally pressed against such creature at night. She had a hole in her neck! That has certainly taught me to respect woodlice!

And sexual threats? Based on your book, it seems that a century on, The Sexual Life of Savages is no longer as scandalous, and the Trobrianders are in many ways more prudish than Europeans or Americans.

Married couples still show no public signs of affection towards each other. They cannot even hold their hands. Sex of teenagers, especially with many partners, is accepted and even desired. Teenagers have sex, or, translating from the Kilivila language, “they make friends”. After the wedding, however, promiscuity comes to an end. Husband and wife must be faithful to each other. Malinowski’s book was scandalous in the 1930s on account of its depictions of sexual positions, even though they took up only a fraction of a huge work dealing with social and family structures. Sex is a buzzword that lets you describe society.

It became a buzzword also for you in your brand new book about sex life of big cities.

I’m currently working on true stories about love and sexual relations in 11 world metropolises that are located along the route Jules Verne described in his novel Around the World in Eighty Days, including Hong Kong, Singapore, Mumbai, Cairo, New York and San Francisco. Those relations run into troubles everywhere you turn to. In the Trobriand Islands it’s a cultural norm prohibiting relationships within the same clan; in big cities it’s the rush, the fact that people have no time for each other, and keep chasing an ideal. And the more they look for it, the more unattainable it becomes. 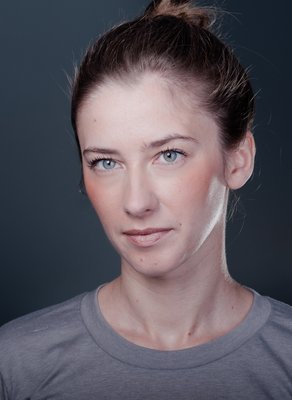 A journalist, reporter, born in 1979, currently working for Newsweek Polska, and previously for Gazeta Wyborcza and its magazines – Duży Fomat and WysokieObcasy. An anthropologist by education. She is working on a book that will describe sexual habits in the 11 biggest cities of the world, and chronicle her journey in the footsteps of Phileas Fogg, a hero of Jules Verne’s book Around the World in Eighty Days.

Sex, Belet and Magic. The Sexual Life of Savages 100 Years Later – a book published in 2014 by the Znak Publishing House is an account of Aleksandra Gumowska’s over a month stay in Papua New Guinea, and the Trobriand Islands, which the famous Polish anthropologist Bronisław Malinowski visited back in 1915. Nominated for the Beata Pawlak Award in 2014, and National Geographic’s Traveller Award in 2015. 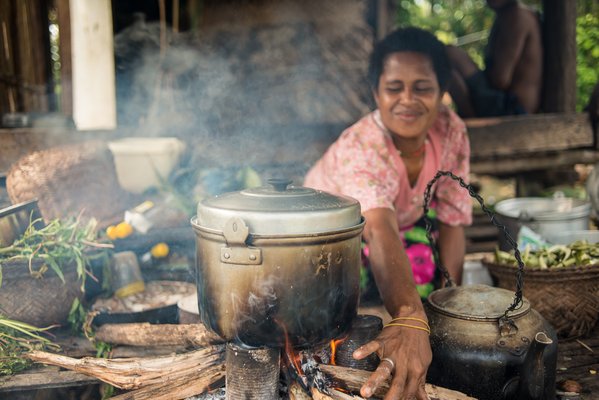 Situated in the Solomon Sea, east of New Guinea, an archipelago of over a dozen coral islands and islets, the most important and biggest of which are Kiriwina, Kaileuna, Vakuta, Kitawa and Tuma. They occupy an area of 440.3 sq. km and belong to Papua New Guinea.

Discovered for Europe in 1793 by Antoine Bruny d'Entrecasteaux, who named them in honour of his first officer Denis de Trobriand.