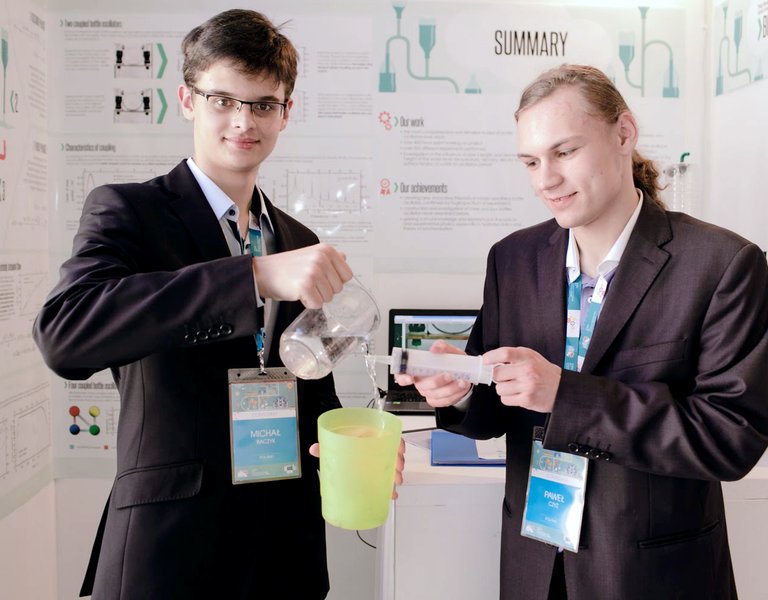 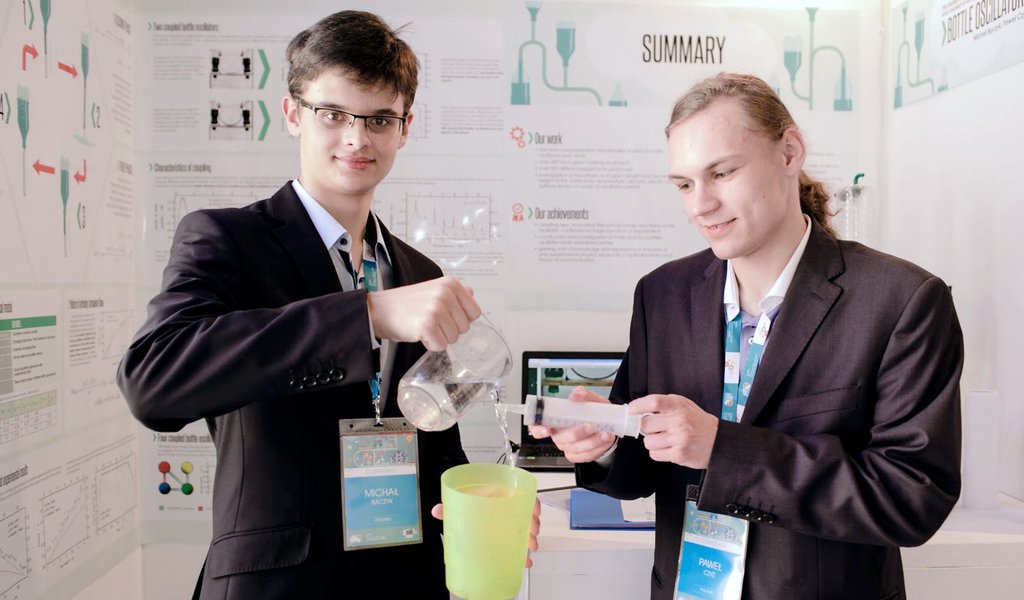 Polish students claimed the top awards at the 2015 European Union Contest for Young Scientists (EUCYS) held in Milan. Michał Bączyk from Ostrów Mazowiecka, the winner of the contest’s first prize, tells Polska.pl about the research he is undertaking.

All of the Polish students who showcased their research projects at the EUCYS in September returned to Poland with awards, including first and second place as well as several special distinctions. The competition was fierce: over 100 projects were submitted, from a couple dozen countries. In the 26-year history of the EUCYS, Poland has claimed 50 awards, the second highest number after Germany. 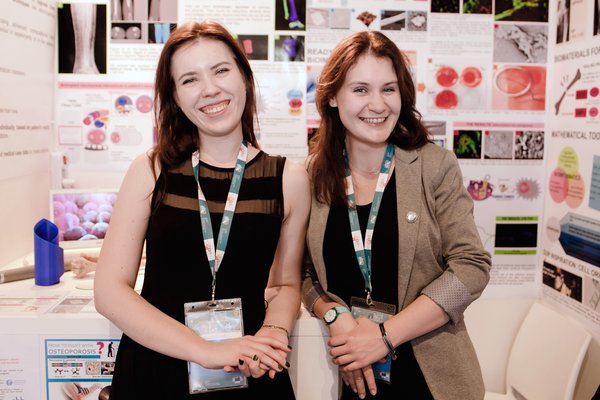 The European Union Contest for Young Scientists is a prestigious competition organised by the European Commission to recognize the best projects developed by young scientists. In 2015, Polish experts within the fields of bio-technology, astronomy, biology and physics reached the finals of the contest. One of the three main awards (with a prize money 7,000 euros) was awarded to Michał Bączyk i Paweł Czyż – physicists in their final year at the Stanisław Staszica high-school in Warsaw whose research project focused on a carton of milk. The Poles set out to find out why milk poured out of a carton sometimes comes out more forcefully and sometimes less, often leading to it being spilled. The same thing happens when water is poured from a full plastic bottle into a glass. Until now, no one had looked into this occurrence, which is termed oscillation. Michał and Paweł were the first – and they created their own bottled oscillator, for which they received the EUCYS award.

Also recognised by the EUCYS jury were teenage scientists Dominika Bakalarz (18) from Opole and Joanna Jurek (19) from Piotrkow Trybunalski, who were given one of the top three awards alongside a special distinction in the form of a work placement at Bocconi University in Milan. Specialising in bio-technology, they created a project called Origami BioBandage, a mathematical model for bio-implants: a surface is coated with stem cells and used for the treatment of osteoporosis-related bone defects. These stem cells are able to adapt their shape, much like origami, in order to adapt to areas of concern, which they cover with new tissue. 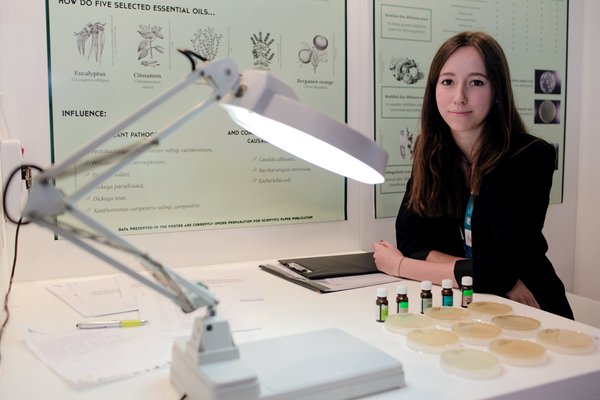 “This project has allowed us to combine my passion for origami and mathematical modelling with Asia’s interest in biology,” says Dominika Bakalarz. “At first, we found it difficult to believe that cells could take on origami-type shapes. However, after creating mathematic models it turned out that it is indeed possible and that they in fact adapt to the shape of the bone. Our design also allows us to use the patient’s details in order to tailor our models to each individual case.

Paulina Drożak from Lublin received a special distinction: a visit to the European Southern Observatory (ESO). The 18 year-old has been carrying out advanced research in the field of astronomy, comparing temperature anomalies on the Earth to selective characteristics of the sun.

The 19 year-old Sara Berent from Gdynia, a biology expert, was awarded the Expo 2015 Prize in addition to a visit to the Joint Research Centre (JRC) in Italy. Berent has done research on the effect of essential oils on mushrooms and bacteria, with the purpose of finding out if the oils could play a useful role in the protection of plants.

The organiser of the Polish edition of EUCYS within the European Commission framework is the Polish Children’s Fund.

Why does water bubble when poured out of a bottle? Ostrów Mazowiecka’s Michał Bączyk, the winner of the first prize at EUCYC 2015, talks to Polska.pl.

Aleksandra Stanisławska, Polska.pl: What exactly is oscillation, the process you studied together with Paweł Czyż?

Michał Bączyk: Oscillation is an amazing process that often happens in nature. It could be the rhythmic beating of our heart or a pendulum. For our project we concentrated on the less common until now bottled oscillator.

Its design is incredibly simple. It consists of an empty bottle, a straw and a piece of plasticine. After inserting the straw into the bottle and sealing the system one fills the bottle with water. Then, it is enough to turn the bottle upside down – this creates oscillation.

What happens during this process?

When the bottle is turned upside down, gravity makes the water flow out at a certain rhythm. As the water flows out, the content of the bottle decreases. This increases the amount of air in the bottle.  And if the level of air increases, then the level of pressure decreases. The different in pressure between the interior of the bottle and its surroundings causes the flow of water to slow down, and then change its direction – moving upwards. Once the air pushes the water completely inside, it enters the device. The pressure is then high enough for the process to repeat itself.

Does your discovery have any practical application?

It is, above all, easy to emulate. Anyone can build their bottled oscillator at home as all you need, as I already mentioned, is a bottle, straw and a piece of plasticine. Furthermore, the whole process is very visual, very captivating, almost hypnotic. Using this device one can learn about flow dynamics, such as hydrodynamics and the theory of synchronisation at any level of difficulty and complexity. We presented our device at the 43rd Meeting of Polish Physicists, where it received much interest. A lot of teachers and professors came up to us and told us that they would tell their pupils and students about what we have done.

It seems that your findings can also be used to explain several practices in physics.

That is correct. The research we did on oscillators has concrete scientific value and can be used to better understand the world around us. The development of our project could also lead to the development of a separate branch of physics focusing on flow dynamics. Some of our findings are very general in nature and can be applied to other areas of hydrodynamics. Using one, two or three bottled oscillators we are able to create interesting models on synchronisation – whereby one oscillator has an impact on another one.

Where could these occurrences take place?

Once can witness them in, for example, theatres, where a certain synchronisation takes place during clapping. It turns out that such occurrences involve complex mathematical problems, relating in some cases to geometrical frustration and chaos theory. Building such devices could help us better understand their physical qualities. That is why our work on bottled oscillators can be applied to other areas of knowledge as, for example, geometric frustration takes place in antiferromagnetic structures and chaos theory takes place in weather-related phenomena.